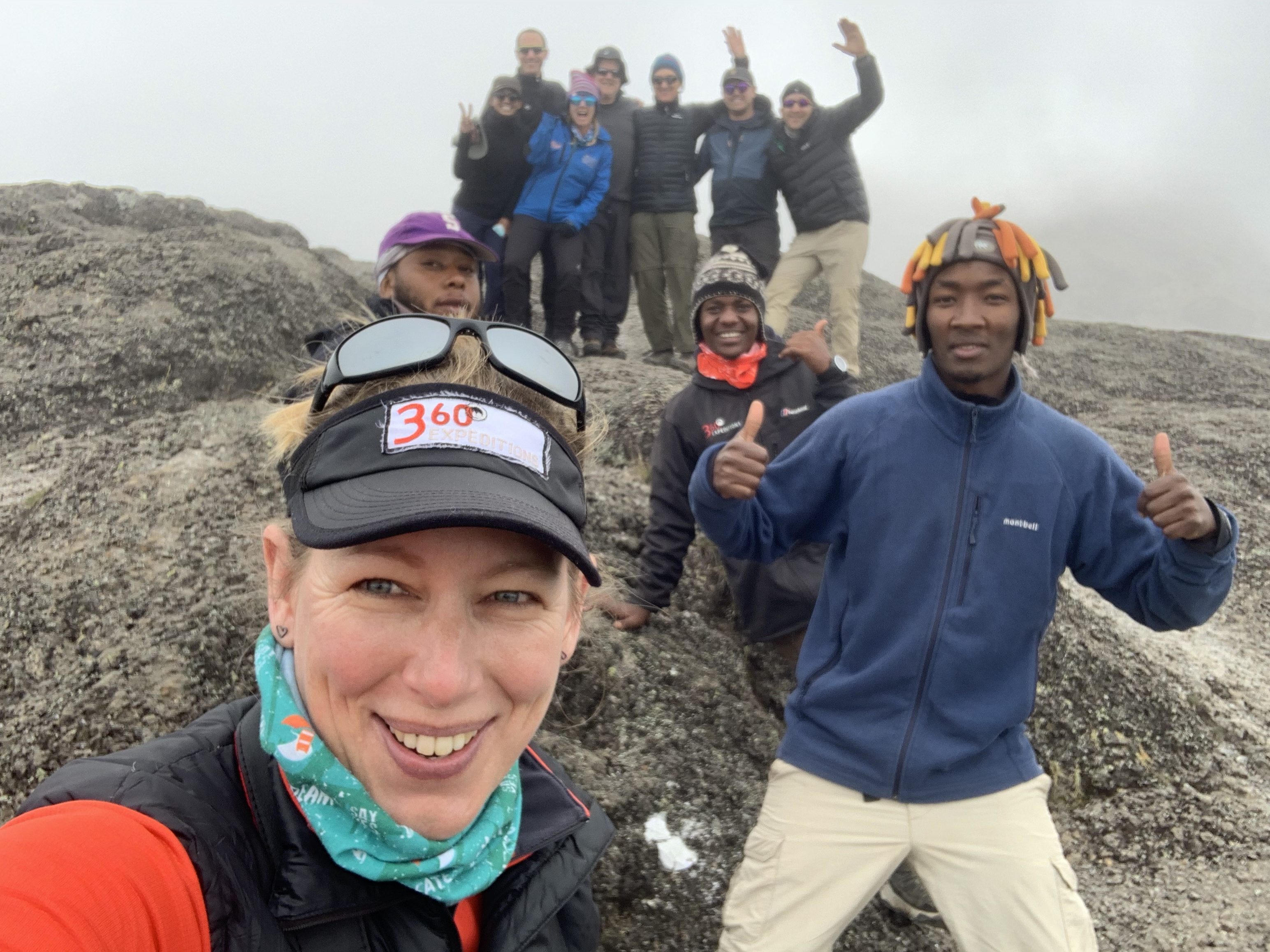 This week we’re talking to Jo Bradshaw about her career in adventure. Jo has climbed 5 of the 7 summits (including Everest) and I’m sure will be ticking off the last two shortly! Alongside her personal expeditions, she works taking other people on expeditions. Plus lots of other bits on the side.

In fact it’s probably better for me to let Jo explain it all herself. She tells the story of going from corporate into freelance adventure. Plus loads of useful insight that you can learn from too… Take it away Jo!

My work has 3 main areas: an Outdoor Instructor, Expedition Leader as well as public speaker. Quite a lovely mix!

I teach DofE students the wonders of being in the outdoors for the expedition element of their Bronze, Silver and Gold awards. I also work with corporates in the UK who want to harness the power of the outdoors and it’s uses as metaphors to working in business, there are a lot of relatable experiences!

On the Expedition Leadership side, I work in the UK and abroad with charity and private clients, facilitating their dreams of achieving lifelong goals. From climbing Snowdon at night, to cycling from London to Paris, to climbing a 6000er in Nepal, India or South America.

Public speaking wise, I do talks and workshops in corporate, schools or to groups about my journey from a no-sayer to climbing Everest. I’m hoping to expand this part of my work this year in order to raise the funds to complete the last 2 of the 7 summits and therefore be able to raise more funds for children’s mental health charity Place2Be. It’s going to be quite a year!

As I alluded to above, I used to be a no-sayer! When I left school I worked with horses and thought that it would be my life… including a farmer husband, lots of dogs, horses, goats and basically the good life! But as we know life rarely turns out the way we expect! I left horses in my mid 20s and, needing to get a job and new career, took a job in a department store in Aylesbury. I worked my way up through management and then into other industries, always trying to improve myself and gain more confidence.

It was in the early 2000s that I went completely against the grain and did a parachute jump for charity. I was also a massive height hater at the time too, so my friends were somewhat surprised (as was I!).

After the jump, Asthma UK, who I had raised funds for doing the jump, sent me a flyer in the post about a bike ride in Peru in 2004. I came up with all sorts of excuses not to do it. Too far away, too much money to raise, too hard to train, I didn’t have a bike! I also didn’t have the deposit and thinking that would be the clincher for not doing it, a friend then offered to pay the deposit and I would pay her back – oh dear! Roll on to April 2004 and off I went to Peru.

A Change in Lifestyle

That jump and bike ride then gradually changed my life. I did another 2 bike rides with the same company who had led us in Peru and then they asked if I’d like to crew trips with them, such as London to Paris. In 2008 they then offered me a job in their offices just outside Salisbury. So I moved the 120 miles down to Wiltshire, sold my house, gave back my fancy 4×4, halved my salary and took on a new way of life!

They also gave me the opportunity to lead a load of expeditions whilst I was based in the office. Until, in 2010, when I left the comforts of a regular salary and went self-employed. Now I fill my time with hugely fulfilling work in the outdoors and although I earn little, my richness in life is immense. I split my time in the UK with DofE and then overseas on expeditions with students and adults mostly climbing mountains – although the Sahara does feature occasionally! I also work with corporates in the outdoors – as well as delivering presentations and talks about my change of life and change of attitude. Also I present at the DofE Gold awards a few times a year, so I get to wear a dress from time to time too.

Did you always intend to make your work related to adventure and outdoors?

Not at all! Although having said that I always thought I would work in the outdoors when I was with horses. I spent a good number of years indoors, behind a desk or in a retail store and always itched to get outside again. I’m very fortunate to have found a new passion having thought that one in a lifetime was enough.

I started my life of adventure when I had a full-time job and could combine both quite nicely. I used my holidays from work to work on trips and expeditions… so I had a great mix back then. Moving into adventure as a career took some getting used to. Being self-employed I was literally earning every penny myself, rather than being paid regularly. Yes, it’s hard but totally 100% worth it.

Advice wise, go for it! If you want to go full on self-employed then be prepared for being away a good deal of the year. It’s not great for home life, but it is doable if you have a good network around you. Be prepared to work long hours too. It’s not all fabulous summits and great weather, but the odd adage of “a bad day outdoors is still better than a good day in the office” is so true.

To mix adventure with a normal career, give both 100%. When you get back from an expedition, you are likely to have post trip blues and your mind can wander onto what’s next… which can be somewhat frustrating for your employers! I do think though that an adventurous life can have a big impact on your work life too, making you used to more uncertain circumstances and expanding your normal.

I fundraised for the first bike ride in 2004. I then paid for the next 2 bike rides and have continued to pay for my non-work expeditions through my own money. My uncle passed away in 2010 and left me a small amount of money. This really got me started with Mera Peak in Nepal (6461m) and Aconcagua in Argentina (6962m) during 2011.

After that I climbed Manaslu in Nepal (8163m) in the autumn of 2013 and I put that on a credit card which I’m still paying off (not recommended!). I was hugely fortunate for Everest in 2015 and 2016 that a sponsor found me, and I then focused on fundraising for children’s mental health charity Place2Be.

Denali was the same deal and now I am raising funds myself to pay for the last 2 of the 7 summits by doing talks, presentations, workshops and selling advertising space on my van. I’m raising funds for the charity once again too. It’s all hugely hard work but very worthwhile.

How do I get started leading overseas expeditions?

The majority of companies who operate overseas expeditions have a good list of leaders who have been working for them for a long while. You need to start at the beginning with UK events, to earn your stripes. This way a company will see how you interact with clients on long days, in stressful situations and whilst you are tired.

Making sure you have a good CV of personal expeditions is always a bonus. Not just ‘I’d like to volunteer on your trips’. To send a volunteer on a trip costs the companies money and they would rather send someone who does this as a job and is qualified… But it’s hard to get experience without having the experience! Send your CV to a host of tour operators and expedition companies and hopefully one will take you on to do the smaller challenges. Then work your way up from there.

You are highly unlikely to get the big stuff straight away. By being a client first, I gained more experience on the bigger mountains. I saw it as an investment in my training and future as a leader. I learnt so much this way, without having the pressure of being responsible for the clients. Plus I saw it from both sides of the coin. I have since guided on these mountains (Mera Peak, Aconcagua) as well as then guiding on others 6000-ers too. Schools expeditions are also a good way of gaining experience (e.g British Exploring Society or Raleigh International). Once again, be bold and send your CV out to the companies whose ethos fits with yours.

Or as an adventurer?

To get going as an adventurer you need to decide what floats your boat. Do you want to trek, cycle, paddle and so on, or do all during a journey? Adventurer means different things to different people and adventures don’t need to be months long in unexplored territories. It’s a huge subject to touch on but to start:

Make a big list, or a spider chart and get scribbling! Following adventurers such as Al Humphries, Dave Cornthwaite, Anna McNuff and Laura Kennington will give you a good idea of how to get started too. They all started with an idea and it blossomed from there.

You might also like: How to Have your First Adventure and How I Became an Adventurer with Alex Staniforth

How I’m Preparing For My Summer Mountain Leader Assessment

The Hazards of Regular Adventure