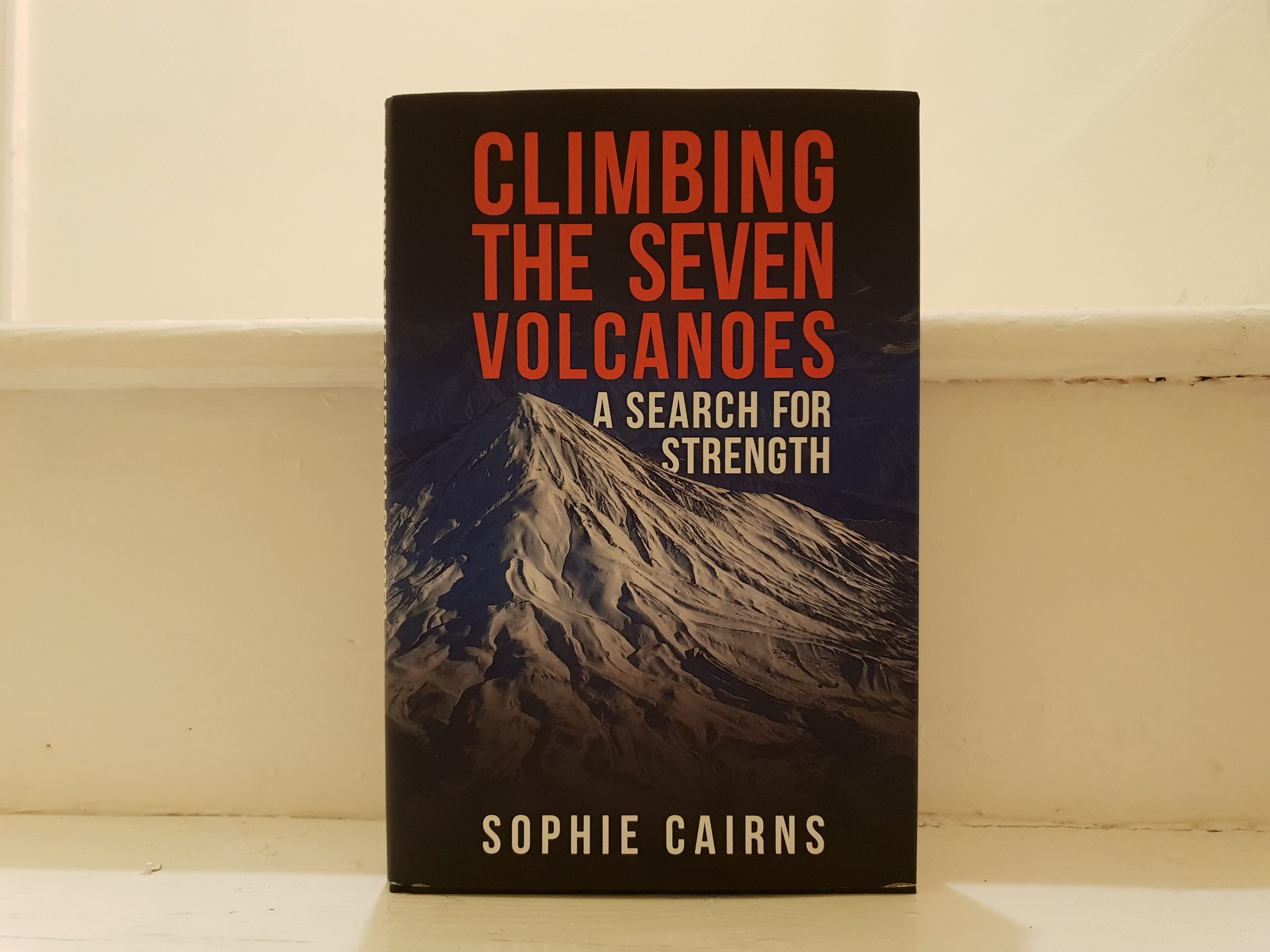 Yes people, we’re doing a book review! Because when we can’t travel to far flung mountains across the world, reading about them is almost as good. I was sent a copy of Climbing the 7 Volcanoes: A Search for Strength by Sophie Cairns to review. But first, let’s just check we’re all on the same page.

What are the 7 Volcanoes?

I first came across the 7 Volcanoes (or 7 Volcanic Summits Challenge) while doing some research for a Much Better Adventures article. I can’t remember which mountain it was I was writing about – perhaps Kilimanjaro or Davramand. Both were trips they sold and both are on the 7 Volcanoes list. One of the best things about being a full time adventure writer (and someone who does this stuff for fun) is that you get to learn about all these interesting things and call it work. Equally, vast amounts of the things I do for fun felt like CPD. Anyway, when I first heard about the challenge, I thought, “Cool that makes perfect sense.”

There is a strain of contrariness in my blood. If something gets too popular, I tend to deliberately walk in the other direction. That’s why something as big and commercial as the 7 Summits, no matter how great a mountaineering achievement, has never really appealed to me. But climbing the highest volcano on each continent? Well that is intriguing. An interesting twist on the mainstream – and volcanoes are just cool.

What I didn’t realise was just how niche the 7 Volcanic Summits were as an objective. When Sophie Cairns set out on her adventure, only a handful of people had completed the full list. That’s compared the the hundreds who’ve done the 7 Summits. Climbing the Seven Volcanoes: A Search for Strength sent me down a fascinating line of discover that I’ll get on to later. But first and foremost, this is a book review. So let’s talk about the book.

First up, I got on well with the narrator. The book is a personal account of a personal challenge, told in first person. When I read the blurb in the press release, it seemed to make a point of Sophie Cairns being an “ameture mountain climber”. I would like to put my hand up and admit that I’m guilty of being a mountaineering snob at this point. I made the subconscious connection that ameture climber meant ameture writer. Hell no. Shame on me for thinking it – and none of the rest of you make that mistake. I stood corrected by the end of the first two pages. This is very well written – but would you expect less from a journalist who’s spent years writing for a living?

Secondly, this is not a book about mountains. The ascents are a vehicle for a personal and emotional journey. As someone who’s just written a book along those lines too, I really appreciate that decision. Sure, it can be interesting to know the precise detail of each pitch and bivvy in some mountaineering books, but Climbing the Seven Volcanoes goes much deeper than simply peak bagging. It must have been pretty heart wrenching and soul bearing to write too – if Sophie’s experience was anything like mine.

Put simply as a reader: do not expect painstaking detail, nor a story full of jargon or an “and-then-and-then-and-then” style plot. The most you’re expected to understand are crampons and harness. Do not expect a turn by turn account of the routes up each mountain either. That is simply not the point. But do expect a story that gives you just enough to feel like you’re there, without boring you on the details. A story that’s efficient with plot – the chapters have been chosen with purpose from months of expedition, not just because that’s what happened next. I guess I’m saying it’s well crafted and as a writer (and reader!) I admire that. There are also mini maps before some chapters so you know where you’re headed next.

So what is it about? Love and loss and legacy. If you have ever lost anyone close to you or considered your own mortality, you’ll like this book. Maybe even if you’re not too fussed about mountains. It’s a thoughtful and heartfelt account of someone trying to achieve a goal much bigger than themselves. There are also interesting themes around attitudes to novices in the mountaineering world and the two-sided coin of tourism in remote places.

In all, I would recommend it to people who like challenges (even if only from an armchair); honest, funny writing; and emotional journeys. If I’ve piqued your interest, you can get a copy of Climbing the Seven Volcanoes here.

Now, Sophie beings the book with the challenge to set the Guinness World Record for the fastest time to complete the 7 Volcanic Summits. Me being me, I looked it up as soon as I read that chapter. Don’t do that, eh? It’s like skipping to the end of the movie to check you like it before starting. Anyway, you’ve been warned about spoilers now, so here’s what I discovered.

Considering my recent experiences with GWRs, I thought, “Maybe she didn’t bother doing it through GWR. It’s an extreme faff, or they might have rejected her evidence.”

Then I continued reading.

Later on in the book, not only does GWR reject her application for making the 7 Volcanic Summits a new record, but there is also a question raised about which mountain really is the highest volcano in Asia. Which really surprised me, because here it is now listed as a record on their site. (I wonder if Sophie knows this?) What’s even more interesting is that they clearly recognise the 7 Volcanic Summits as a defined objective because the “Youngest person to climb the 7 Summits and the 7 Volcanic Summits” exists and has a record holder: Satyarup Siddhanta.

But equally, lots of people have completed the 7 Volcanic Summits, as the list of Volcanic Seven Summitters clearly shows. If I can find that list with a quick google, surely the research team at GWR could. Maybe there is a reason there aren’t any record holders? Maybe something in their rules (they can be a bit strange!) or that they’ve chosen the unclimbed mountain in Asia as the tallest – but then Satyarup can’t have climbed that one if it’s unclimbed…