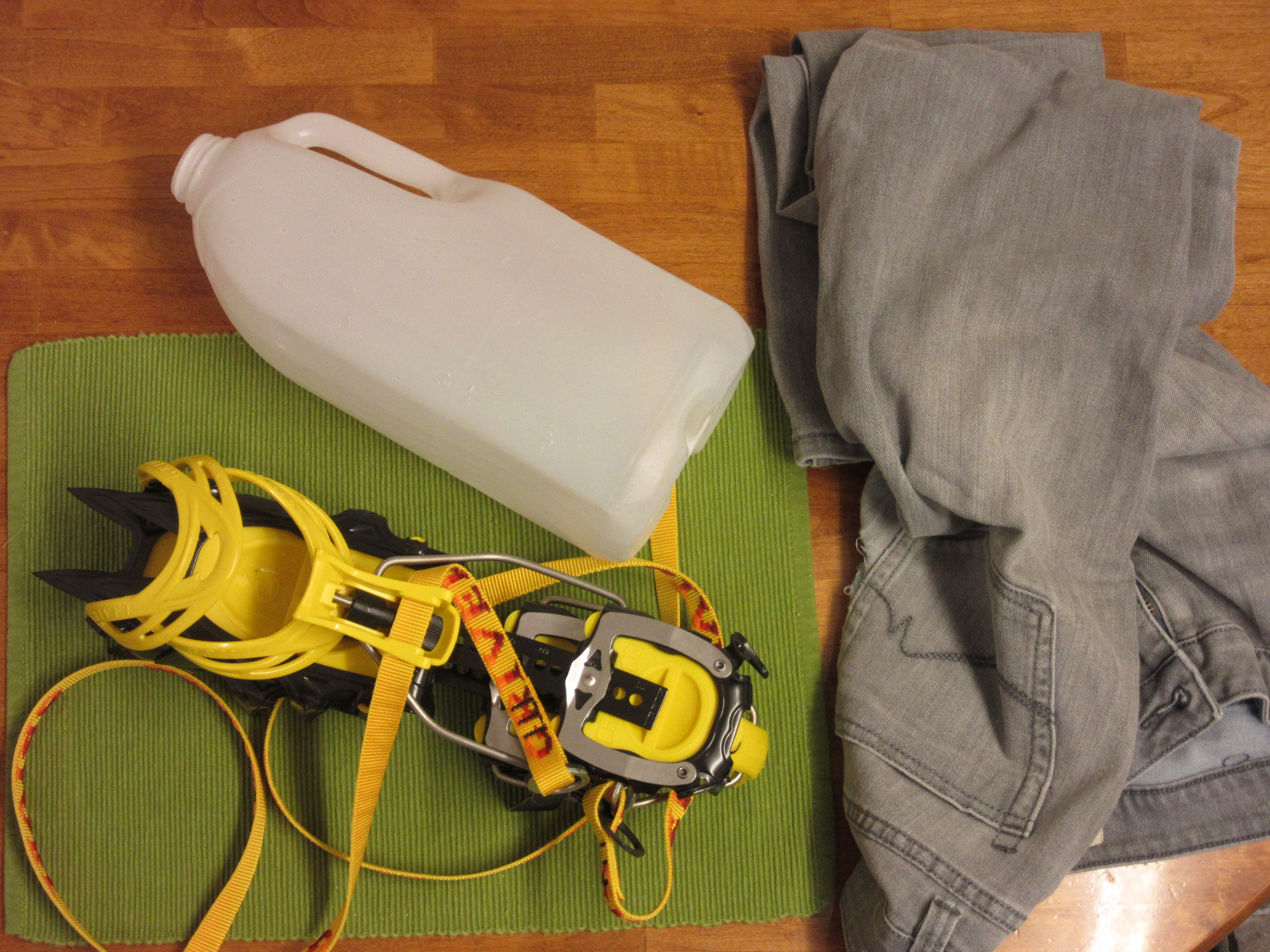 How do I make a crampon bag?” I asked myself. A quick look at ones for sale and a couple of creative leaps and I had the answer! Last year, I bought a pair of crampons. I’d been borrowing them for ages and it was high time I got some of my own. Being a crafty little thing, I bought a secondhand pair that had been basically never used. Great. Trouble was, they arrived in a cardboard box without anything to carry them about in (that is, without destroying the rucksack). A quick Google and I discovered:

So, I set to it with some imagination. After using my construction for a year, I’d like to share it with you. Here’s how to make your own crampon bag…

Wash your milk bottles! And dry them properly. You can see, if you look closely in the picture, that mine isn’t quite dry. Cut along the dotted lines in the picture above. This will remove the handle from the milk bottle and the top section that is not flat. Repeat this with the second milk bottle. You should end up with something like the picture below.

Take your crampons and place them on top of one of the legs of your old jeans. Your jeans should be wide enough to fit the crampons on with a bit of space around the edges. This was fine, in my case (although only just because they were slightly skinny jeans) but if you have big feet you might need bigger trousers. Maybe there’s a correlation between foot size and jean size?!

If your crampons fit snugly or are hanging out over the jeans, you’ll need to get a different pair. You can see in the picture that I’m using the bottom half of the leg – from where I’ve ripped the knees to the ankle. Cut this section off from the trousers – leaving as generous a margin around the crampons as you can.

Unpick the stitching down one seam of the trouser fabric that you’ve just cut off. With the wrong side facing up, place the two milk bottles on top. Use the picture to see the correct positioning of the milk bottles. You want the two “bottle top” ends together.

At this point it’s important to check that everything still lines up. The indents that you cut out of the two milk bottles should line up with a very little overlap. The fabric should reach all the way up the sides of the milk bottles, but not necessarily over the top.

If the fabric doesn’t reach up the sides then you are going to need some bigger trousers!

Next, cut the “top” section of the milk bottles off, as in the picture below. From now on we’ll refer to “top” as the front-most side facing us (furthest away from the table).

You now have an open basket into which you can put your crampons. Notice how I’ve left a bit of a lip at either end of the basket for sturdiness. Place your crampons inside the basket and adjust how far apart the milk bottles are, so that the crampons fit in easily. Make sure you can get them out over the lip.

You may end up with a bit of a gap between the two halves of milk bottle (like I have). That’s okay – use the scraps of flat plastic that you cut off the milk bottles to patch up the gaps. Duct tape the whole lot sturdily together. The milk bottles now form one solid plastic basket.

Next up comes the sewing! Cut the second leg off of the jeans (from knee to ankle – or the same size as before) and also unpick the stitching down one seam. Connect the long edge of two of these pieces of fabric, with a zip placed in between (see zip on RHS of picture).

Take the second zip and attach it towards the far edge of the fabric (see LHS of picture). This distance is judged by the width of your milk bottle basket. I measured this roughly off the basket after I’d sewed the first zip in. Ensure that both zips are facing in the same direction.

Next draw around the end of your milk bottle basket. Leaving a good 1/2 inch extra fabric for seam allowance, cut out 4 squares from your jeans. This can either come out of the top half of the legs or the front below the pockets.

In the picture above, I have used one square as a guide and then cut through several layers of fabric at once for speed. Sew one end of the fabric cover on to the corresponding end of the fabric, between two zips. I would make this the 3 edges which will end up on the inside of the milk bottle basket, leaving the top edge open.

Repeat this for the other inside piece, on the other end between the zips. Put it inside the milk bottle basket to test. It should look something like the picture below.

Next up, with the right sides facing outwards, sew the other 2 end caps on to the outside of the basket. Note that you don’t have to do the sewing with the milk bottle basket in place – it just helps to illustrate where the pieces should be added on.

Once you’ve done that, THEN insert the basket for the final time. You need to sew along the open edge (facing camera in the picture above) to join it to the inside. The zip should now have one side snugly between two pieces of jean fabric.

Finally, you need to take a last strip of jeans to cover the top of the bag. Luckily for me, I had enough fabric left between the back pocket and knees to use. You may have offcuts, or you might need another piece of fabric. To finish up, sew this strip of fabric down each side on to the two free sides of the zips. I sewed mine on top to hide the unfinished ends. You might need to unzip the zips in order to wrestle this around a sewing machine. Finally, attach the “lid” to the side (on the BOTTOM end of the zips – or you’ll never be able to open the thing!) using a sewing machine or by hand if it’s too awkward.

Hopefully, your milk bottles and jeans are almost looking like a crampon bag by now! To tidy up, I hemmed over a few loose ends and attached a ribbon between the two zips. That way you can pull one thing and undo both zips at once. This is much easier when you’ve got gloves on.

And there you have it! I hope it’s helpful… and happy crafting!

How to Fix a PowerTraveller Power Bank that Won’t Charge

How to Build a Home Drying Room for Outdoor Gear

The Camping Kit I Actually Use and Why