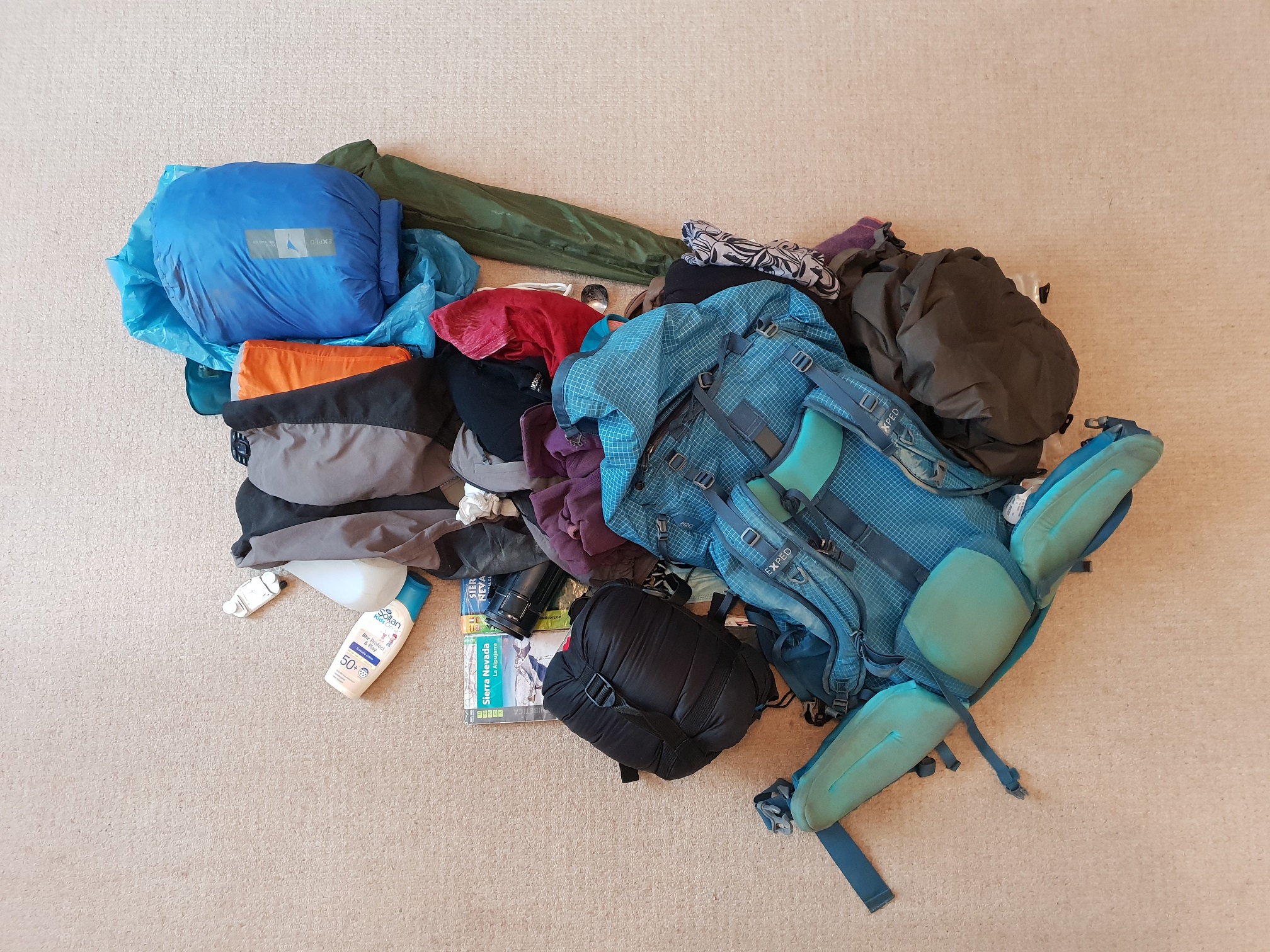 Normally, I post my kit list before a trip. You know the deal, pristine kit in neatly arranged photographs. But this time, I thought it would be fun to show you the kit after the expedition. That way you’ll see exactly what I took and exactly what the expedition did to it!

Having just got back from Spain and emptied my filthy, stinking kit out onto the living room carpet, let’s get started.

Okay, let’s start with the outside. This backpack was very kindly provided by Exped in exchange for a gear test and review/content. It did very well. It’s a very lightweight, slim line bag that feels like it was made for alpine ascents. Considering that way back at the beginning I thought I might be able to get away with hand luggage only (ha!) this was just the right size bag. I could not have gone any smaller.

The large dry bag was used as my “hand luggage” bag and for keeping things like clothes in during the actual expedition. Not that it rained ever, but it’s useful to have. A huge dry bag is the perfect solution to hand luggage, by the way, it moulds to fit any size aeroplane restrictions.

You’ll notice that I also didn’t take gaiters. I feel pretty naked not taking gaiters with me, which says a lot about where I do most of my walking. But honestly, I didn’t need them. The weather in the Sierra Nevadas was hot hot hot! Anything even remotely approaching a bog was a welcome sight.

Let me tell you, the smell of this pile of kit was something else. I spent 99% of my time in just the t-shirt and trousers. I hope you appreciate that horrendous suncream/sweat line round the top of the t-shirt! Also the trousers are completely covered in Spanish mud.

The weather was hot – did I mention? I knew it was going to be warm, so I packed accordingly. You’ll notice there are no waterproof trousers in that pile. The waterproof jacket is an old one of mine from uni, which I refer to affectionately as “the bin bag”. Definitely would not recommend. But for light relief from sudden downpour it does the job. I took it in case of occasional thunderstorm.

It has taken me five years to get around to buying Montane Terra trousers. They really did perform. The vents on the sides were invaluable (had them open all the time) and the poppers were great for stopping excess fabric from getting in the way. It would be nice if the pockets were a tiny bit longer, but you can’t have everything!

The Lyra II was again sponsored by Exped, as was the sleeping mat. I made a few modifications to the tent. As you can see, the original bag just didn’t fit my packing style, so I stuffed the tent canvas into a dry bag. I also swapped out half the plastic pegs for metal ones because I figured they wouldn’t be a match for the Sierra Nevada rock and mud. Turns out I was right.

The sleeping mat was hands down the best mat I’ve ever slept on – and I do not say that lightly. It felt like it was made by someone who’d spent a long time on mats and it just worked a treat. I will be replacing my Alpkit Numo with this from now on.

I could have got away with a much smaller sleeping bag, as it turned out. Even at above 3000m the weather overnight was not cold. However you just don’t know that until you get there and it’s better to be safe than frozen. I also don’t actually own a 2 season sleeping bag, so this one did fine. I slept with it open every night.

And then finally my trusty stove (with a not so trusty spark lighter…). It took me completely by surprise at just how fast it boiled water at altitude with warm weather. Again this says a lot about when and where I usually do my camping! But it was novel to have water boiled in 30 seconds! I had to get gas out there because aeroplanes and fuel are a big no no.

This picture was taken before the trip because, well, I ate it all didn’t I! In fact you can see the packing mistake right there. I took an apple porridge instead of an evening meal for one night… oops. You might be asking, “Emily, why take it all in a huge tuppawear?” Well, if you read up about the Sierra Nevadas you will find lots about foxes eating all your food and destroying your tent in the pursuit of food. This was my solution, a low-grade version of a bear canister. I kept all my food and rubbish in box, leaving it in the tent porch under a large rock every night. I didn’t see a single fox. (Reccommending tuppawear doesn’t usually come into my remit, but Lock&Lock are the best!)

In terms of the food I brought, cashew nuts were inspired. It was exactly what I wanted to eat in the heat. Breakfast bars survived well, but I think my recipe could do with some tweaking. (I hate cooking in the morning, so this is my solution.) Everything else was standard. The wraps didn’t go mouldy but tasted rather stale towards the end. Hobnobs could only be eaten in late afternoon when they’d warmed up enough to be unstuck from eachother! My only regret is that I didn’t bring emergency jelly babies, or pure sugar of any kind. Could have done with some of that.

Now then, the tech. I’ve honestly never taken so much tech on an expedition! But due to GWR’s requirements on evidence collection, I had to take it – and enough stuff to keep it working. I also tried to get a bit of redundancy in there, because (as you should know by now) I really hate relying on tech. As someone who also doesn’t use a smartphone as their main phone, I got a 1 month data package payg that covered Europe.

I’ll probably go into performance in more detail when I start telling the story of this trip. But briefly, the GPS66i is a fab bit of kit that’s reliable and adds so much more functionality above and beyond what the likes of a SPOT Gen3 provides. I’m underwhelmed with the Fenix, it behaved like a flouncy 2 year old – but we’ll come to that in the story!

Only other new thing was the Peak Designs camera clip, which is expensive but worth it for securing your kit. I was very happy to be scrambling on exposed ridges, camera out front, knowing I wasn’t about to lose it or drop it off a cliff.

Phew, that’s a lot! It’s all fairly self-explanatory really. I used the Molle pouch attached to the outside of my rucksack, as a way to quickly get at things that wouldn’t fit in side/belt pockets. For example, it included my trowel, loo roll, hand sanitiser, suncream, water filter etc. I regret not bringing a normal lip salve as well as the suncream one. It simply didn’t do the job on moisturising lips, but then I’m fairly prone to cracked lips.

I didn’t bring a hairbrush, which felt like a fairly bold move (I do have over a metre of hair). It was fine, but I wouldn’t want to do two weeks without out one, or would actually end with dreds! I mostly used the 1:25k map, but Spanish maps are nowhere near as accurate as UK ones. Seriously, they can’t even agree on the names of the mountains and how high they are.

Also in Spain, it was mandatory to wear a face covering in any public space (even outside) and of course I had to wear it on the plane and bus. Having had some experience walking up steep hills in full PPE, I went for something that looked like it would stay in place well and not cause me to expire if I had to run across an airport.

Did you use it all?

Here is a pile of the kit I used.

As you can see, that’s most of it. Even if I didn’t use it very much (like, say, my belay jacket) I wouldn’t have wanted to go without it.

Now for the more telling picture: the kit I didn’t use.

I could have definitely got away without gloves. The weather was unusually warm, I believe, in the mountains. The guidebook said 15-20 degrees at 3000m and it was a good 30 degrees for me. I did think about using the scrambling gloves but honestly couldn’t be bothered when it came to it.

I didn’t use my waterproof jacket, although a thunderstorm did get pretty close one evening. I didn’t really use my first aid kit, or whistle or headtorch either. Does that mean I could have gone without them? Yes. Does that mean I won’t take them next time? Absolutely not. You never know when you might need them and you don’t want to get caught out.

There were a few spare bits of cabling and clips that I thought might come in handy but I didn’t actually use either.

So there we go! That’s a full breakdown of all my kit for the Spanish 3000s expedition. I’m happy to answer any questions about specific pieces of kit if you’d like, just ask away.

Walk Kit List: What I’ll Be Taking On My Expedition