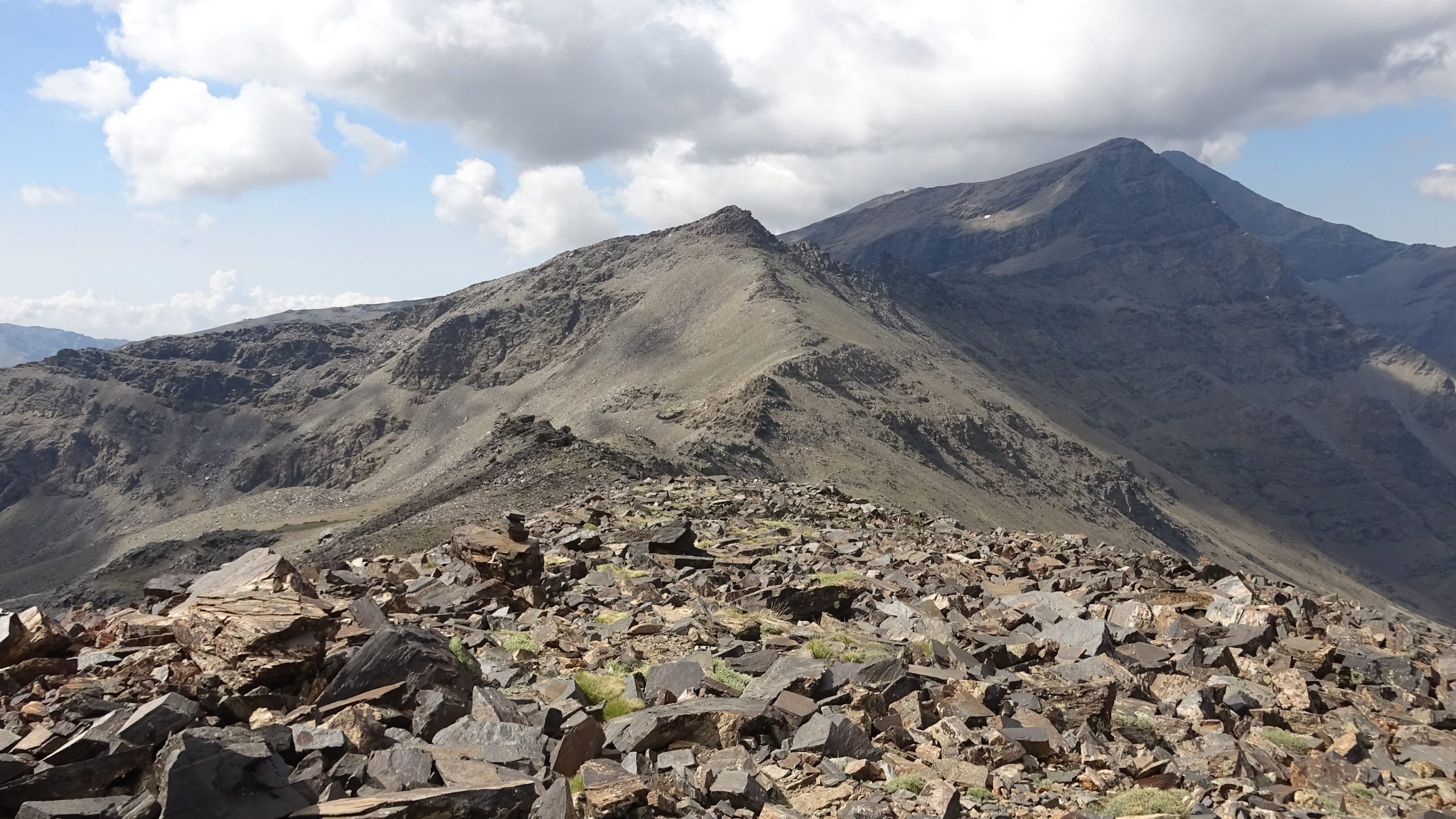 Right then people, these Spanish 3000s updates are taking too long. You’ve been waiting very patiently and I’m going to try to precis the rest of the trip in three parts. Else I’ll accidentally write a book here.

By Day 3, I felt like I had finally found my rhythm. I let go of the idea of doing the full ridgeline. I let go of the arbitrary 25 peaks. Then, suddenly, everything became simple. My entire existence had been reduced to one simple task: climb two mountains a day. That was it. Yes, look after sleeping, eating, drinking and all those staying alive things. But all that was required of me each day was to summit two 3000m peaks.

There was something incredibly liberating about that. Even as I slogged up and down the rocky slopes in rising heat. No arm-length to do list. No cascade of emails demanding actions that were so urgent they should have been done yesterday. Just me and the mountains. Calm and struggle.

The navigation wasn’t so much effort any more. I’d got my head around the map: its scale and idiosyncrasies. I’d learnt not to expect dotted lines to be paths, but that cañada were basically Dartmoor leats on holiday and could always be trusted. I ticked off another two peaks and made camp halfway up the ascent of tomorrow morning’s summit: Puntal de Vacares. That was a strange evening. A bank of cloud came in, the first weather I’d seen, which manifested as fog around my start point. Luckily I only spent a few 100m in the fog with the cows before I popped back out into clear air.

It turns out that Laguna de Vacares was actually a beautiful camping spot. I pitched in a little stone shelter on the ridge, high above the lake. I was quickly realising that these were actually built for you to camp in, for wind protection. My Dartmoor brain had instinctively told me to camp away from them, because they looked like settlements.

The next morning, the moon hung bright over the ridgeline. The morning sun turned the rock orange. I walked towards it – onto the crest and towards Puntal de Vacares. There is nothing like a grade 1 scramble to wake you up in the morning.

Grinning stupidly from ear to ear, I picked my way through the rock and up the peak to the summit. This was fun. This is what I’d wanted.

Evidence duly collected, I carried on along the ridge, traversing on its spine towards Puntal de Goteron. It was one of my favourite bits of the whole trip. If the Integral is like that all the way then it is one hell of a route. Just technical enough to keep you awake, sparsely marked enough to keep you on your toes. I was having the time of my life. I was walking through a cathedral of rock – like an open topped tunnel or the ancient spines of a great ship’s hull. The upturned rib-cage of a stone serpent.

At Puntal de Goteron, it was time to drop down off the ridge. Alcazaba, my next peak, loomed high above. There was supposed to be a cairn-marked path down towards the river, but I couldn’t spot it. Not that this surprised me: the tiny cairns were almost invisible on a background of loose rock. But I was in such a good mood, I ignored this inconvenience and headed downhill anyway.

After a while, the little voice in the back of my head thought, “This doesn’t really match up with the map.” But I carried on anyway, sure I’d bump into a cairn at some point. I filled up my water from a stream that dropped steeply off into a beautiful cascading waterfall. That was what I was expecting… but not in quite this configuration. The contours were all wrong.

“Hm. Odd,” said the voice. “Still, there’s the river and that’s my start point. Let’s get down to the valley bottom.”

I then proceeded down an incredibly steep and grassy slope to reach the main river. At the bottom, I crossed it and looked at the altimeter. 2600m. Low. Much lower than I’d been hoping to start.

It was only when I started my ascent, and the view behind me opened up, that I realised the extent of my mistake. Oh my word. I was miles away. My blithe enthusiasm had taken me much further down the valley – and importantly downhill – than I ever needed to go. Never mind the fact that I now had a monster of a scree slope and crags to cross, to get back to where I was meant to be.

“Too much fun, not enough map reading,” I muttered as I clambered and slid up my detour.

Eventually, I corrected course and made it to the top of Alcazaba. But the detour had cost me a summit. I’d hoped to squeeze in Peñon del Globo as it was so close and also right above camp. But I’d snookered myself and now there wasn’t enough time. My target goal had dropped from 15 to 14 peaks – I doubted there’d be a chance to claim it back again.

And beats high mountain down

So, I found myself at camp in Siete Lagunas by mid-afternoon, sitting in the shadow of Mulhacen and wondering what to do with myself. The wild camping rules in the Sierra Nevadas state that you must only put your tent up less than an hour before sunset. Very reasonable. But with sunset at 8pm, it was going to be a long wait.

What did I do? Honestly, I just sat. I didn’t bring any books or podcasts or entertainment. I had a notepad that I wrote in a little. I looked at the map and planned the days ahead. Once again, I coaxed my smart watch into saving the day’s track. While the GPS 66i was behaving like a trooper (my kind of solid, reliable gear!), I’d personified the Fenix as a 2 year old that didn’t want to eat its vegetables. You could trick it into getting what you wanted, but only if you were devious and persistent.

So, mostly, I sat and watched the mountain. The huge flank of Mulhacen, tallest mountain in mainland Spain, sat squarely in front of me. It was like a wall – so tall that you couldn’t see over it, but nor could you see the top of the mountain. The rock was grey and the steep slope composed of thousands of pieces of smaller rocks, from the tiniest peddle to huge crag-like boulders. Every so often, a stone would slip and cause a tiny cascade of rocks down the slope. I realised that, if you sat there long enough, you could watch the mountain fall down.

Against All Odds: The Spanish 3000s Story Part 1