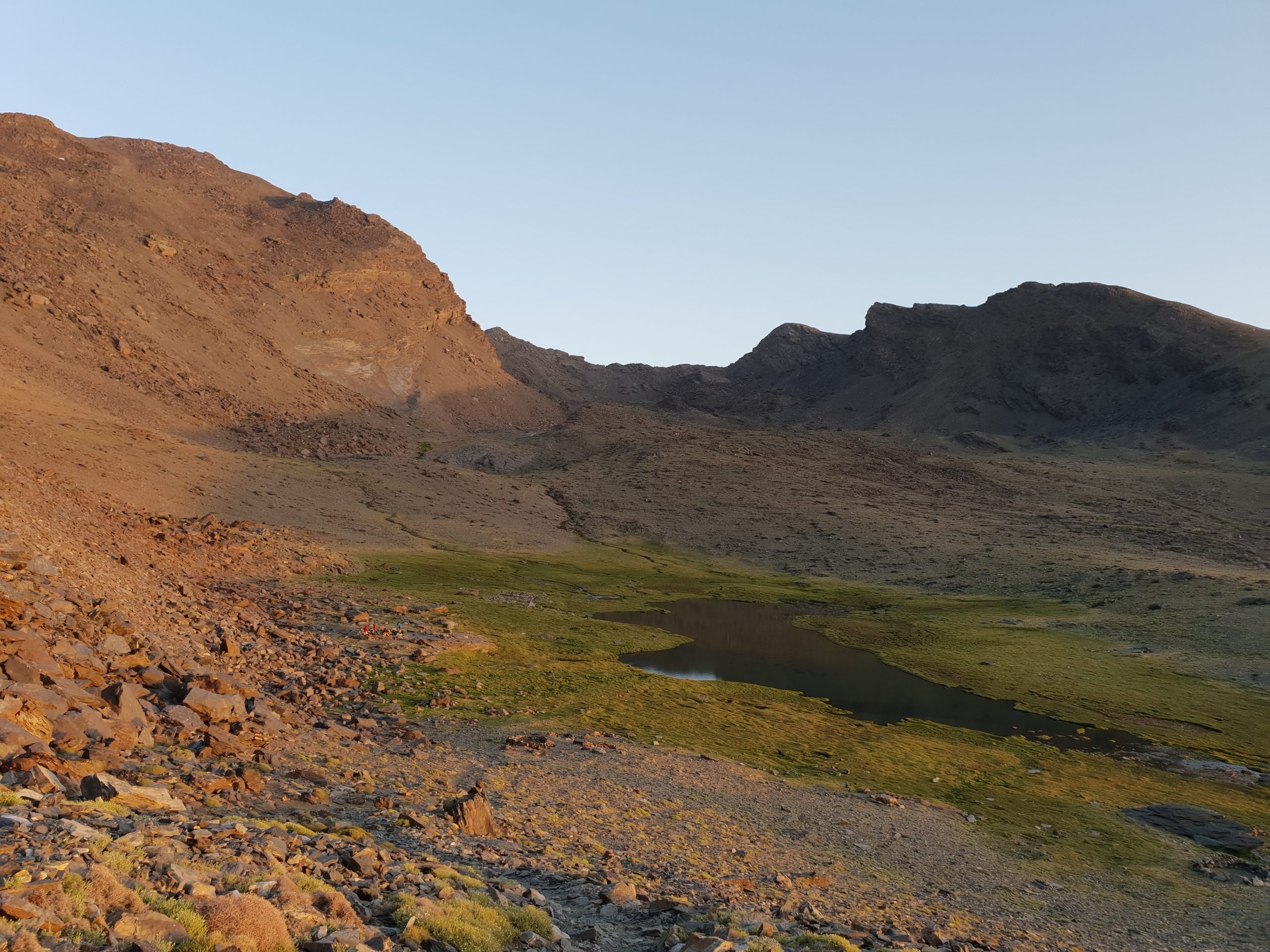 This is part 4 of the story of my Spanish 3000s expedition. You can catch up with part 1, part 2 and part 3 before we get started. I’m about halfway through my trip by this point…

Finally, in a golden morning, I reached the top of Mulhacen’s 3479m. I wasn’t the first person up there. I met a large group on the ridge, all about my age, heading back down to their tents already. Up for sunrise and then off back to civilisation. I wondered if maybe I could leave all my stuff at the bottom of a mountain one time.

This was it: I’d beaten a Guinness World Record. Assuming my ascent of Cerro Pelado counted on Day 1 and that my GPS tracking saved correctly and… Yeah, I wasn’t exactly having a party. They say you can see Morocco from the summit on a clear day. That morning was hazy, but beautiful in its own right. I was meant to be in Morocco three days after travel stopped. Hopefully I’ll make it there one day.

Through the clitter and dilapidated buildings (apparently ruins from the civil war), I found the shrine. Kneeling down in front of it, I looked behind the metal bars at all the trinkets left in the alcove. There were necklaces and ribbons and labels strung on the door too. Somewhere in here was one for me, left by a follower Dan who had taken his son up the summit several weeks ago. I love surprises and anything resembling a treasure hunt. But I couldn’t find anything that was obviously for me. Yesterday had been National Walk up Mulhacen Day – the Virgin of the Snows pilgrimage from Trevelez – and I wondered if someone else had taken it.

One of my mantras for this expedition was that I was trying to do everything as easily as possible. I say that within reason – it was a Guinness World Record attempt – and remembering that “easy” looks different to different people. I could have made life in the mountains much easier with a support team to carry my stuff and make my tent. But it would have been a nightmare for me to organise.

“The easy route,” was something I said to myself with increasing decrees of incredulity as I headed up Puntal de la Caldera. At my start point, halfway down to the only manned refuge in the area, I was supposed to be able to fill up my water in the river. It looked fairly major on the map, but when I got there the river bed was dry and dusty. Ah. Luckily I found some more in a slightly dubious spring further up, but it was still so hot I was sweating off my waterproof suncream. I got back onto the main track – the easy route – and then cut across to the col some 500m distance away from the summit. Not the most direct, but I could then take an easy and relatively horizontal path along the ridge to the summit of Puntal de la Caldera.

At least, on the map it was marked as a path. Standing on the col and looking across, I couldn’t see it. It looked very blocky and a bit srcambly. But I was getting used to that in Spain and expected I’d probably find cairns if I got started. So I went.

The further I got, the more intense the scrambling got. The easy route. The easy route? I was down-scrambling off pinnacles, assuming I’d missed the path entirely and sticking to the increasingly narrow ridge. It wasn’t particularly hard, but the exposure was quite something. The entire mountainside dropped away a couple of thousand meters on my right. The easy route, I told myself.

I was at least expecting some sort of a marker on the summit. But hot and bothered and pumped with adrenaline, I eventually reached the top of what seemed to be the highest pinnacle. The “top” was not much bigger than the space I could sit in.

That evening, I did a classic “start your next day’s ascent this evening” before settling down to camp at Laguna de Mosca. The picture here doesn’t do it justice at all (I haven’t had time to edit) but it was really incredible. Huge mountain cliffs on all sides, a lake that looks like it’s perched on a cliff edge and silence.

It was always a lot of effort to go downhill, past a campsite, and then plod back up again late in the day. But it was always worth it. I was on my first peak of the day at sunrise, on possibly my favourite mountain of the trip: Pico de Juego Bolos. I bet most people skip it out because it’s just a little nobble on the back of Puntal de la Caldera. But personally I think it’s splendid.

One down for the day already, I began my big hike to the other side of the map for new peaks. As I crossed back over the col between Mulhacen and Puntal de la Caldera, I looked up at Mulhacen wondering if I had time to have another look in the shrine. Just in case I’d missed something. But it really wasn’t the time. Instead, I made a bee-line for the road.

My hike across the map to new peaks was facilitated by an old road, cut across the mountainside for 5 or 6 kilometers to the foot of Veleta. I was so excited. Although it was a bit rocky by road standards, it was like a motorway for weary legs. A motorway complete with mountain bikers. I was already feeling like I was getting back to civilisation compared to the emptiness of the first half of the week.

My next peak was Cerro de los Machos. To climb it, I had to walk all the way past it and downhill until I was almost in the ski-town below Veleta, before turning 180 and heading back up. Soul destroying, perhaps, but I wanted to make this as easy as possible.

Along my hours of road walking, I’d started to think of myself as La Tortesa. A word which I’d decided meant tortoise in Spanish, but which is apparently nothing of the sort. In fact, it looks like I made the word up. Any self-respecting pirate should know tortoise/turtle is tortuga in Spanish. Anyway, I hobbled along imagining that I looked like a tortoise to anyone watching. A tortoise with a huge blue shell on its back. Perhaps a snail would have been more appropriate. But I’d no idea what snail was in Spanish.

It was much to my delight that, upon arriving at my start point for the ascent of Cerro de los Machos, there was a tortoise to greet me. Not a real tortoise, but a 3 foot square painted plastic tortoise model.

You see, the mountainside north of Veleta has been redeveloped into a Ski Resort. With apparently 110km of ski runs, 21 ski lifts and a family area in its arsenal. But in the summer, it looks bizarre. There is nothing quite so surreal as crossing a sea-life themed kids’ ski run in the scorching heat, with no snow.

By this point, it was late afternoon and my brain was killing itself with boredom. Easy is one thing, mind numbing is another, but hill reps on a mountain with a heavy backpack at 30 degrees is madness. But I gave myself pep talks and soldiered on, planning the next bit of shade and the next sit down. I got back onto the road, rounded the corner and then it was time to find new ground and summit Cerro de los Machos.

I’d got used to expecting strange paths in the Sierra Nevadas, but the further I went the more I thought “Really?” The dusty sheep-trod of a path came up to some crags and seemingly dropped off an edge. I stood at the top and peered over. Oh no, just a fixed chain to get round a sketchy looking section with a big drop. The Spanish must have been taking notes from the Slovenians.

I shuffled round it without too much difficulty, considering the bulky backpack.

“Right then, now where?” I looked up at the ridge directly in front of me. It was steep scree, with no clear path and enormous crags – really steep and loose. But I’d come to expect that. So, although bad, this didn’t look unlikely.

After a fair bit of slipping and sliding (and finding what I think might have been part of an old aeorplane), I reached the ridgeline. I was nestled in a steep groove with Veleta on my left and a pinnacle on my right. And that’s when I realised I’d gone the wrong way.

Of course that was too difficult for a path Emily! As far as I was concerned, I’d just invented my own grade 2 scramble to a point on the ridge no one really cared about. The view was great. But I was on a knife edge in the wind. Looking right, I doubted I’d be able to scramble up and down over the pinnacles to get to Cerro de los Machos. Looking left, I seriously considered climbing Veleta instead. It was a steep face, but I thought I could make out a route almost. But then I also knew people went rock climbing on this side of Veleta. Not a place to get stuck in on your own.

And so, I turned around and slid back down the way I’d come – as quickly and safely as I could manage. Wishing I’d read the guidebook more thoroughly, so I could remember what was do-able round here: looks can be deceiving.

“Well,” I said to myself, “you wanted excitement and you certainly got it. Are you happy to go back to being bored again now?”

Against All Odds: The Spanish 3000s Story Part 1