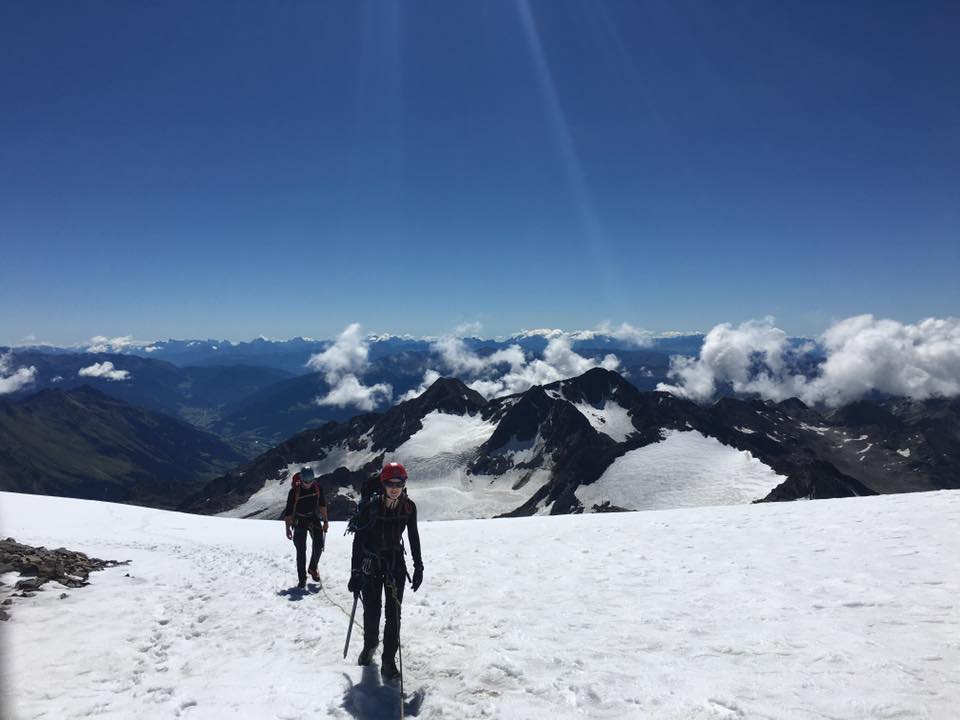 A year after graduating from university (2016), I went on the Austrian Alpine Club (UK)‘s Young Members’ Tour. It was designed to introduce younger club members (like me) to the world of summer alpine touring. To show us the ropes, somewhat literally, and equip us with what we needed to do tours of our own. Hut to hut touring was completely new to me. I’d been inside mountain huts before in the Dolomites, but never to sleep. The concept of going from place to place without a tent, or a bicycle, was pretty novel too.

Although I’d just started my blog back then, I never actually wrote about the trip. Obviously we learnt a lot about glacier travel but what sticks with me most was the culture shock. And I’m not just talking about being a young girl who doesn’t drink in a hut full of men, beer and schnapps. Here are some of the biggest surprises I had that you should probably be aware of too, if you’re going to stay in an Austrian mountain hut. Of course, remember that this is through the lens of a fairly naïve 20-something-small. There is no photographic evidence. We were travelling in the Stubai Alps, so at least one hut was technically Italian.

I cannot find the name for these beds, but they certainly weren’t the bunk beds you’d expect in a youth hostel in the UK. Instead of individual beds, there was just a full platform of mattress that you squeezed as many people on as you could. In our first hut, we had a small room that was mostly bunk bed – only the bunk bed was five people across on top and five below, with no partitions. In another hut, probably Muller Hut on the border with Italy, I slept on a floor-level mattress that felt like the springs and all had been built into the floor. The only thing separating it from the floor was a low wooden partition.

It was kind of like what you do as kids at a sleepover, except you’re full blown adults sleeping next to complete strangers in a mixed dorm. You think you’ve staked out an appropriate space and then someone will come and park themselves in between you and the person next to you. Especially if the hut is very busy. Prepare to have your personal space invaded by strangers. (On the other hand, if someone is snoring, it’s apparently fair game to throw socks at the perpetrator until they stop.)

Communal nakedness seems to just be a thing in Austria. The bathrooms would have shower cubicles without doors or curtains. Or, once, with separate doors in a line, but only half-height partitions between the cubicles. Err… I am up for a lot of things but getting naked in public is never going to be one of them. As conservative Brits, the group (ten of us, including 2 girls) generally spent the time not washing much. There were sinks – long metal ones like troughs in fields – that you could wash your face in. But these were often outside the bathrooms, in the corridors. I distinctly remember David leaving a meal between courses for a 3 minute shower because he figured everyone else in the hut would be at dinner. It worked.

Maybe things have changed in 6 years, but you really couldn’t be vegetarian living off hut food. Not that I am, but even the boiled green beans tasted of bacon somehow. They are very big on salt and vinegar in their food. By which I mean adding salt to everything and vinegar to everything else – like sauerkraut instead of just cabbage. Some of this probably has to do with preserving food far from road access, but even the one at the road head was like it. Dumplings, soup, meat and three-meat-tasting-vegetables plus sauerkraut were standard. Puddings were fun at least. Hello strudel.

For those of us who drink hot water instead of tea or coffee, you can happily do this in Austrian mountain huts. Simply ask for “Tee Wasser” (pronounced té vasser) to get a pot of hot water. It’s meant for tea but no one will make you add a tea bag.

I had come on the trip at a time when a trip meant getting the most out of every second in the mountains. That’s what all my friends did and that’s what I did too. You’d be up at 6am (or 4:30am in a tent at home) and be out in the hills until sunset or longer. In the Stubai Alps, it seemed to be as much about sitting in the hut as climbing mountains. Our days were short, despite perfect weather, and our local guides would be drinking schnapps at 3pm. Journeying hut to hut is a lifestyle – in a similar way to cycle touring. You can make it a challenge, but most people are there for the experience and the other people there too. Which is why half the group stayed up until midnight with everyone in the bar, playing music and drinking. If I remember rightly, we were a complete novelty. They discovered one of us could play the guitar and a pop hits song book came off a shelf somewhere. He then had to play Angels while the rest of the hut sang along – with varying degrees of success.

Want to read more like this? How about some mountaineering or some adventure stories? Or join my Adventure Squad newsletter to hear about my adventures as their happening. If you’re new to the blog (hello!) you might want to start here first. I’m a female adventurer based in the UK.

The Time it Went Wrong…