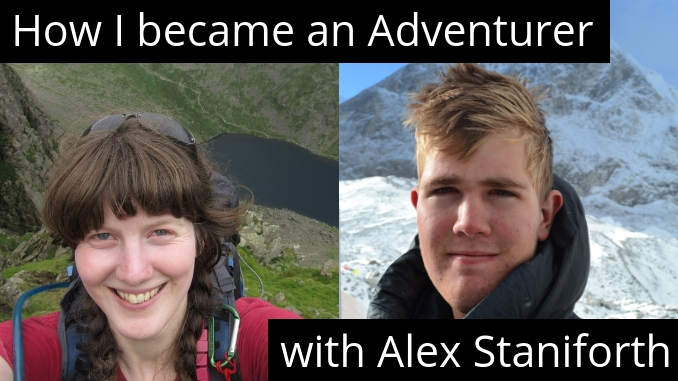 Alex Staniforth very kindly answered some questions for me (and you!) about his career as an Adventurer. He’s given us a really honest and open account of his journey – if you’re wondering how people become adventures and what it’s like, here is one example of a pathway.

Ahh, the all-important question! I’d much rather be asked ‘what’s your purpose?’ than ‘what do you do for a living?’. My work and life goals are pretty much the same thing, and I’m very fortunate to have both closely entwined.

I’m an adventurer and endurance athlete, which involves expeditions and adventure challenges on foot, bicycle and mountains. The physical element is important hence ‘athlete’, and ‘endurance’ refers to the typical long duration. These raise money for charity through the generosity of donations from the public, events and company sponsorship.

The main part of my work is inspirational keynote speaking to business teams, conferences, students, awards and after-dinner events, in the UK and internationally. This is focused on sharing my personal journey, adventure stories and the messages behind them that relate to and inspire the audience. Speakers can get paid very well as reputation and experience grow, but you do a lot for free to begin with.

A Man of Many Hats

I’m also an author, currently working on my second book. Both have a publisher which brings income in royalties, selling books after talks/events, and an ‘advance’ paid for writing the book. The income falls second to the opportunity to do something I’m passionate about and hopefully inspire people who read them.

I’m also a brand ambassador for a facilities management and security company called The Westgrove Group. I get paid for speaking to teams of colleagues and partners in the community, and promotion during challenges. This has been a long-term partnership, feeling like part of the team rather than the typical sponsor relationship. My other ambassador roles are for charities and obviously unpaid.

The adventure challenges are the driving force behind all of it, really.

Where to begin! I had the goal of climbing to the summit of Mount Everest at 14 after discovering the outdoors as a means of overcoming life challenges including epilepsy, stammering, bullying, anxiety and low self-confidence. I’ve suffered with depression and eating disorders since the age of 16 and physical activity in the outdoors still plays a huge role in managing them. Anyway, a plan to achieve this goal began. I had a pretty ordinary background with supportive parents, but they were never going to hand over a cheque to fund the Everest trip (£30,000+) or the years of prior expeditions and training. And rightly so.

The Quest For Everest

I had to ‘find a way or make one’ and came across the idea of corporate sponsorship from other young Everest climbers, namely Becky Bellworthy and Matthew Dieumegard-Thornton. I met a mentor, Chris, who taught me everything needed to get started to raise this huge amount. Meanwhile I was doing my A-levels and worked part time at the local pub to pay keep and personal costs.

Cutting a long story short, it took a full year to fund the expedition in 2014 aged 18. This went badly wrong with an avalanche that tragically killed 16 people whilst we were at base camp. We came home and had to start over.

Everest intrinsically grabs people’s interest and the big break came at the Chester Business Club. In return for speaking to 100 people they offered a donation to the trip and CLIC Sargent, the chosen charity, so obviously I had to take it. That planted the idea of being paid to talk… which was baffling at the time, and I still pinch myself sometimes. It’s a huge privilege to share what I’ve learnt and show people they can achieve their own Everest too.

I worked as a chef and at a hotel to allow flexibility to train and fundraise. By the time I left again for Everest 2015 I was making a sustainable income from speaking and ambassador roles to leave the pot-washing job safely in the past! The second trip went even worse with the Nepal earthquake that struck whilst we were on the mountain. 9000 people died across Nepal and 22 on Everest were taken by an avalanche that destroyed base camp. Our team was stuck at Camp 1 for two days before being helicoptered out. Had we not left base camp that morning it would have been a very different story.

Failure teaches us more than success and the two biggest consecutive disasters in Everest history gave a unique story to tell. I attempted to climb Cho Oyu in 2016 (failed that, too) and my last big project was Climb The UK in 2017, climbing to the highest point of all 100 UK counties by human-power in 72 days. I was inspired by Elise Downing to take on a challenge closer to home and see more of our under-appreciated UK countryside.

Over time as profile grew the speaking work took off, I’ve been fortunate to work with great brands and people, build a fantastic support network and there’s been various charity projects like Walk For Nepal to support the earthquake victims too. New opportunities are always around the corner which keeps it exciting but being able to make a living by doing what I’m passionate about and making a positive contribution is the most rewarding thing of all.

Chris once said: “Shy bairns get no sweets” so on that note, you’ll have to read my book Icefall to find out more! 😉

Did you always intend to make your work related to adventure?

No. Initially Everest was a ‘gap year’ project. I was academic but had no solid career plan and was going to uni ‘for the experience’ like many do. But I soon realised convention wasn’t for me – I wanted to live life on my terms, make a living from a passion and forge the path. It was divine intervention of sorts when I dropped all five university offers whilst trekking out of base camp after Everest 2014.

The intention was always to write a book and maybe do the odd talk afterwards but if you’d mentioned professional speaking 6 years ago I’d have cringed in fear. Having a stammer is hardly ideal for someone speaking on stage to 650 people; which would terrify most of us; but I can manage it much better after a course in 2016. Overcoming so-called limitations is the best feeling.

Work very hard. Be able to cope with uncertainty and criticism. You probably won’t live a ‘normal’ life like people around you who have different values. There might be times when it looks unsustainable – and I’ve forgotten what a weekend means nowadays (though many adventurers are better at finding balance than me). Life can deviate from one extreme to the next so if you like routine, comfort and being accepted then it might not be for you.

My Everest expeditions were almost entirely sponsored by businesses due to their cost. The smaller trips to Mont Blanc and Baruntse were a mix of personal money, fundraising (cake sales, car washes, fundraising evenings, auctions) and a few small grants. As adventure became more of a career, I was able to self-fund more which reduced dependency on sponsors. Being sponsored with gear/kit is different but helps bring down the costs of adventures too.

The more recent challenges like Climb The UK were obviously cheaper and entirely self-funded. In this case company sponsorship donations went entirely to the chosen charity rather than costs. Companies generally sponsor money towards the costs of challenges, thus allowing them to go ahead in the first place. Some prefer that it goes direct to charity – they’re still getting a return. You need to be clear on how the sponsorship is being spent.

How should readers interested in becoming a professional adventurer get started?

It won’t happen overnight unless you’re a social media influencer and end up viral. (If you do, let me know how!). The obvious thing would be to go on an adventure! You need stories and content if you’re going to speak/write/engage people or get sponsored. And you need to build a following to get booked or sell books in the first place. It’s getting increasingly harder to stand out so think big and different. Focus on the aspect that you’re most passionate about. I’m hopeless at social media but writing has been my strong point.

Please feel free to contact me if you have any questions – always happy to help, or at least try!

How I Became an Expedition Leader with Jo Bradshaw

An Easy Strategy to Fund an Adventure