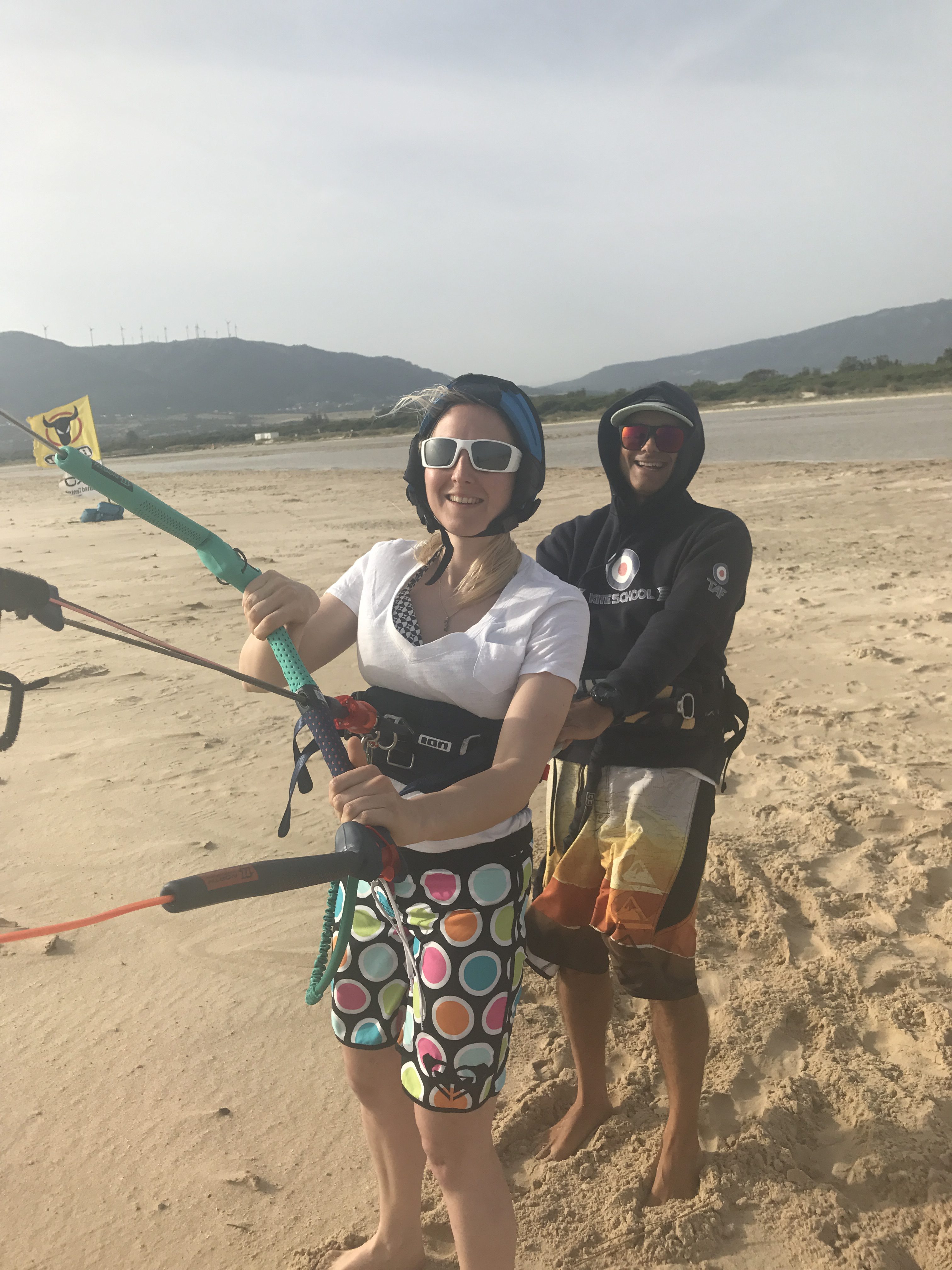 Do you like lists? Me too! So back in January whilst most people made a New Year’s resolution, I made a list of goals I would like to achieve in 2017.vNowhere on that list does it say learn to kitesurf (for the second time). But this is one of those times when you have to screw the list up and jump at an opportunity when it comes your way.

Kitesurfing – We Have History

After being convinced by my boyfriend Martyn we should take a short break in Tarfia to go biking (this is how he got my interest, and kitesurfing) I was all ears. Going to one of the best kitesurfing destinations in the world I decided to give this old friend another try.

Kitesurfing and I are old friends. I learnt whilst I was at University but, not really having the time to carry it on, my skills never improved. Then hurting my back put a stop to any more attempting to fly.

Martyn suggested maybe I take more lessons in Tarifa and, not to be beaten by a challenge, I signed up. This time, I had the help of the Levante: an easterly wind that blows fiercely across the mountains of Tarifa and funnels into Gibraltar straight creating gusty strong winds.

Morocco made a perfect backdrop as multi-coloured kites danced in the sky, many with newbies, like myself, struggling to keep control in the gusty conditions.

Jordi my instructor started with the basics of laying out the kite and lines, then attaching the kite and lines together. The force of the wind determines the kite size. On my first day in Tarifa, I was flying a 3.5m kite on 10m lines as the wind was gusting up to 35 knotts! I tried not to panic about being blown away.

Once the kite was set up, Jordi attached himself through his harness using the chicken loop and safety leash and we launched the kite into the air. It took off with vigor and fidgeted in the sky as Jordi spoke to me about the wind window. This is the imaginary area downwind that the kite can fly in which uses the face of a clock with 3 and 9 being the points where you can land your kite.

Once I had learnt the basics of kite control, it was time to try one handed in preparation for holding the board. This was harder than I expected. Leaving the kite at 2 or 10 o’clock in the wind window and using little movements on the centre of the bar to control it was challenging.

The three main zones of wind window impact the power of the kite. Mastering where to place the kite is a skill that takes time and patience.

The three wind window zones are:

Day one’s lessons over I felt good about my kite skills, but far from ready to stand on a board yet…

Day two was about mastering the body drag. This is a key technique to master both up (against) wind and down (with) wind in case you lose your board.

The Atlantic was surprisingly warm as I bobbed down in the water and, with a slow motion, moved the kite to 10 o’clock. It instantly pulled me forwards and I shot off with the wind down the beach.

After a short while, I moved the kite back to 12 and then over to 2. This time I pulled on the bar a little too hard and shot off in the air, face planting and taking a great gulp of ocean…

After a few more attempts my body drag downwind was going well and it was time to work on going upwind. This was slightly trickier, especially in choppy water. Moving the kite to 10 I stuck out my arm in the direction of the beach and slowly made my way against the wind back to shore.

Reaching the shore I was surprised how difficult I had found it – not only the physical demands of trying to swim against the current, but whilst holding the kite still in the window and trying not to swallow too much water.

Lesson 4 – Adding The Board

The board adds a new element to the mix! I listened and watched as Jordi effortlessly stood up and kited away, leaving me standing in the water. Next was my turn. I sat down in the water, pulling the board onto my feet as quickly as possible, whilst trying to keep the kite at the top of the window. The next step was to send the kite to 11 and then back to 2, sounds simple enough…

It was a lot harder than I remembered, the wind really not helping. One minute it would be gusting and the next it would just die.

During the next few hours I kept at it, determined not to give in. I drank pints of the Atlantic, winded myself twice and had to be rescued by the safety boat once… but persistence paid off and by the end of the session I was standing. Not for long, but standing none the less.

Kitesurfing is a tough sport, there is a lot going on all at once, so brain power and muscle power are both working over drive. I am going to keep up my lessons in the UK.

Final Thoughts If You Want To Try Kitesurfing:

Hannah Attenburrow is a cycling coach, endurance athlete, marketeer and peanut butter addict. You can read her blog at www.beyondthemud.co.uk/ or follow her antics on Instagram and Twitter.

Stretch Zone: Between Comfort and Danger