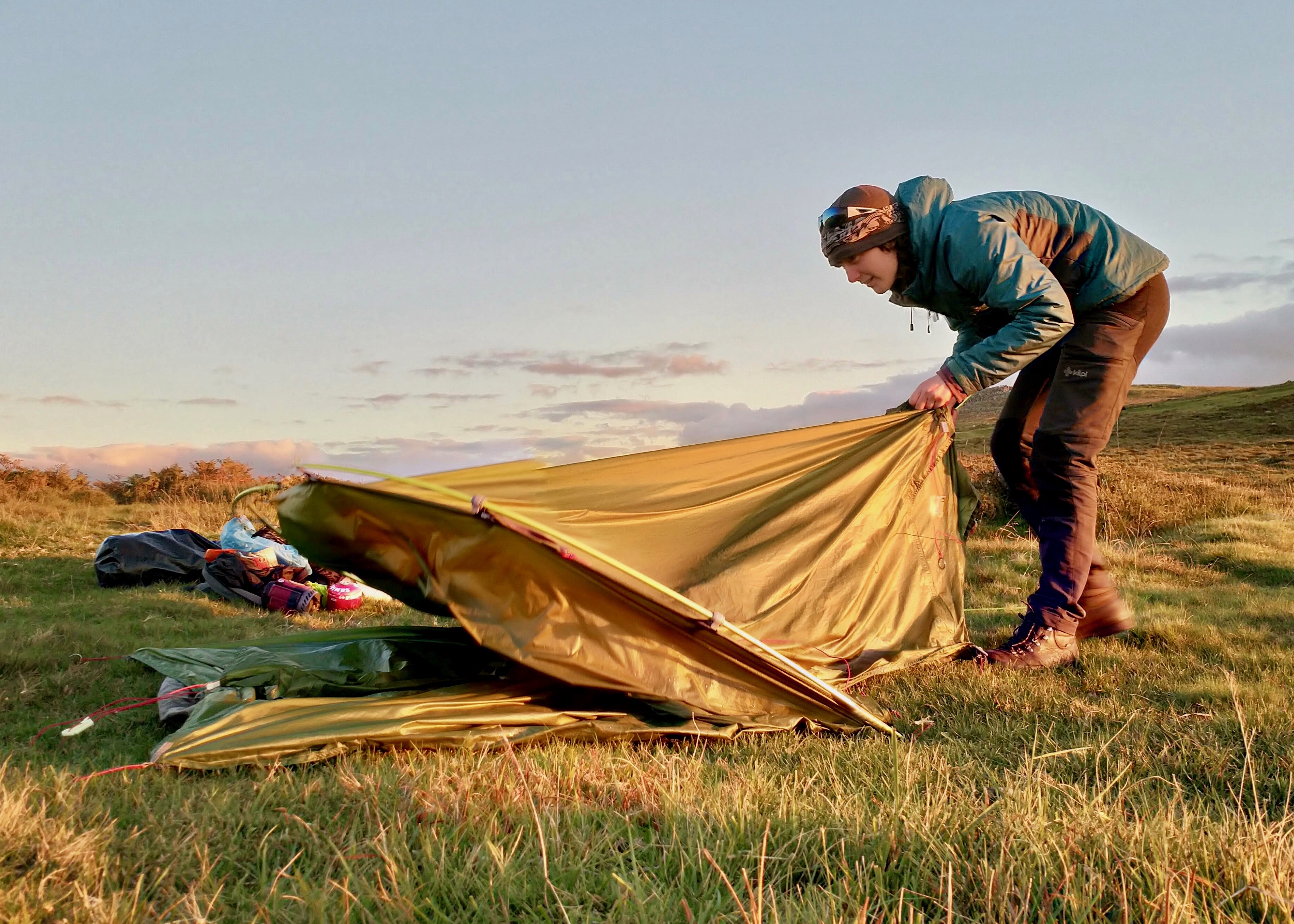 The Vaude Power Lizard SUL 1-2p tent was my companion on the All the Tors Challenge. I have been a passionate advocate of Vaude tents since I was 15 (yes, really) but my current Vaude tent was too big and bulky for the challenge. To be able to carry 10 days worth of food, I needed to go light.

You’ll be pleased to know that I took the Vaude Power Lizard SUL on a little test camp before I went on the expedition. It packs down to an incredibly small bag. In fact, it is smaller than my down sleeping bag (with poles separate).

In terms of feel, the tent material is light – think bin bag – and slinky, like a silk or chiffon dress. The 3 poles were of a good and solid construction – the middle hoop pole pre-bent. The pegs were quite a surprise. None of these wedge-shaped spikes you often get, but thin mini-pegs. They didn’t bend with force though, which was reassuring.

As with all Vaude tents I’ve used, it is incredibly easy to pitch. On day 4 of my expedition, I discovered (by accident) that I could pitch it in the dark without a torch.

Looking into the pitched tent, my first reaction was: “Wow, it’s enormous.” It is a very spacious one man tent. That said, I think you could only fit 2 adults in if they were on a race like the OMM or exceptionally friendly. Maybe even in the same sleeping bag.

To be fair, the diagram Vaude provide shows the second person curled up in the space opposite to the porch. It is plenty long enough to fit a tall person in and would be ample for two children or young teenagers.

Durability – Battling with the Elements

My All the Tors Challenge was not blessed with good weather. I had the tail end of a hurricane marching across Dartmoor, shortly followed by another storm. The nature of my route meant that I had to make some improvised wild camps in less than perfect situations. On several occasions, I chose any form of wind protection against flat ground (forecasts were up to 80mph wind).

The Vaude Power Lizard SUL was really tested in some of the most unforgiving weather I’ve experienced. I was wild camping every night for 10 nights. If it failed me, I would be in a very bad position.

Luckily, it didn’t. I was pretty sceptical to be honest. My practice night on Sheeps Tor in benign and almost perfectly flat conditions had highlighted some potential pitfalls:

But, when you’re on a solo expedition for 11 days, you just have to hunker in and make the best of it. That’s what I did. You can’t always find ground that’s out of the wind or not got reeds in the way or is perfectly flat. It’s wild camping at its best: walk until you can walk no further, then make do with what you can find.

As I said, the weather was far from perfect. Most nights it was raining (often in a horizontal fashion) and very windy. By very I mean at least 25 or 30 mph, gusting between 35 and 50 mph. One day was forecast for 80mph westerly but didn’t actually get that bad where I was.

The tent did pretty well in the awful weather. Never did I once think that it would fall over, take off or break. Never. Vaude make their poles bomb-proof and even when the whole tent was shaking from side to side in a gust, it felt secure.

Some features that came out of imperfect pitching in dreadful conditions:

This only happened twice and the picture above is by far the worst. You can see that it has pooled in the porch above my rucksack. This is because I wasn’t able to stop the outer from creating a shelf for water to collect on, because of the shape of the ground.

It’s very difficult to tension those back corners, and keep them off the inner, because all you can do is pull. Some sort of a cord from the middle pole across between the inner and outer would solve this issue.

Definitely proves the fabric’s waterproof though!

My goodness, this is a noisy tent. In the really high wind I found it very difficult to sleep, simply from the racket the tent was making. I guess this has to do with the tunnel design and the difficultly getting good tension on the corners. This is not something that surprised me, since it is designed as a lightweight tent, but just something to be aware of. It is unlikely to be much of a problem in less-than-storm conditions.

It’s 8 pm at night. I’ve just spent the entire day pacing through the fog, from 9am to 6pm. The tor I have to camp on is so overgrown in reeds that I’ve had to pitch the tent 3 times to get a half decent spot. There’s a huge storm forecast overnight, so I’m forced to pitch with protection to the south west. This leaves very few options.

Eventually I make it into the tent on an awkward slant. At least it’s out of the worst of the wind. I’m exhausted. I huddle up into my sleeping bag and wish I didn’t have to brave a storm, trying not to slide too far across that my down bag touches the side of the tent. I’ve got to try to keep this dry for 11 days, after all!

As I’m starting to fall asleep, the wind picks up. The tent starts to shake, even in the shelter with the guy lines out. That’s ok. I know it’ll withstand the wind.

Just as I’m starting to drift off, a gust of wind hits the tent. The outer hits the inner. A drop of water passes from the outer to the inner and then hits me in the face. I wake up. Over and over.

The next day, I solved this by unclipping some of the inner from the outer. Because it was just me in the tent, I could reduce space inside and increase the distance between inner and outer.

4. Unbelievable Durability for a Lightweight Tent

It’s not really fair to let the poor weather completely cloud this review. I think it’s useful for you to understand how the tent performs in awful weather… and to laugh at my misfortune a little. But considering this is a tent that only just weighs more than a bag of flour (including poles and pegs) its durability was quite incredible.

The Vaude spec describes the tent as “stormproof”. I would agree. I might not get the best night’s sleep, but you will get a night’s sleep. You will wake up in the morning with a solid tent over your head.

I was also very surprised by the pegs. By making them so thin, they can actually get into just about anything. As long as you don’t pitch on a rock, they won’t give you any trouble. I was also surprised that they didn’t ever pull out in the wind.

Having written the above, I’ve just had a quick look to see what other people say about the Vaude Power Lizard SUL 1-2p. I disagree with other reviews who say the porch area is too small for a rucksack. I fitted my entire expedition pack, plus boots, just fine.

Sitting up in the tent, it is quite easy to touch the inner and outer together on the “ceiling”, but I never found this a problem really. I’m not 6ft and after the day’s walking all I wanted to do way lie down.

The tent definitely benefits from being tensioned up once pitched. If you have the time and inclination, you can tighten the corners using straps and the middle pole using the internal cord (in front porch). As explained above, this only goes so far. On uneven ground, I found that the tension adjustment for the end poles wasn’t enough. This can be solved by wrapping the cord round the peg instead.

Only a couple. The tent is sold with only 8 pegs. This means you can’t have pegs at the two ends of the middle pole AND the guys out. This is not a huge problem, but seems odd not to include for the sake of a couple of grammes extra.

The other is really petty, but the clip on stuff sack can only be closed one way around. This seems like a ridiculously annoying feature when you’re cold, wet, frustrated and trying to put your tent away wearing gloves. For the sake of incorporating the Vaude logo into the clip, it’s not worth it!

The Vaude Power Lizard SUL 1-2p is a super lightweight little tent that can hold its own against a storm again and again. A great solution for carrying minimal weight during a couple of nights away. For prolonged expeditions in very bad weather, you might get a better night’s sleep with something heavier. But if you can’t make that compromise, it does the job well enough.

How to Fix a PowerTraveller Power Bank that Won’t Charge