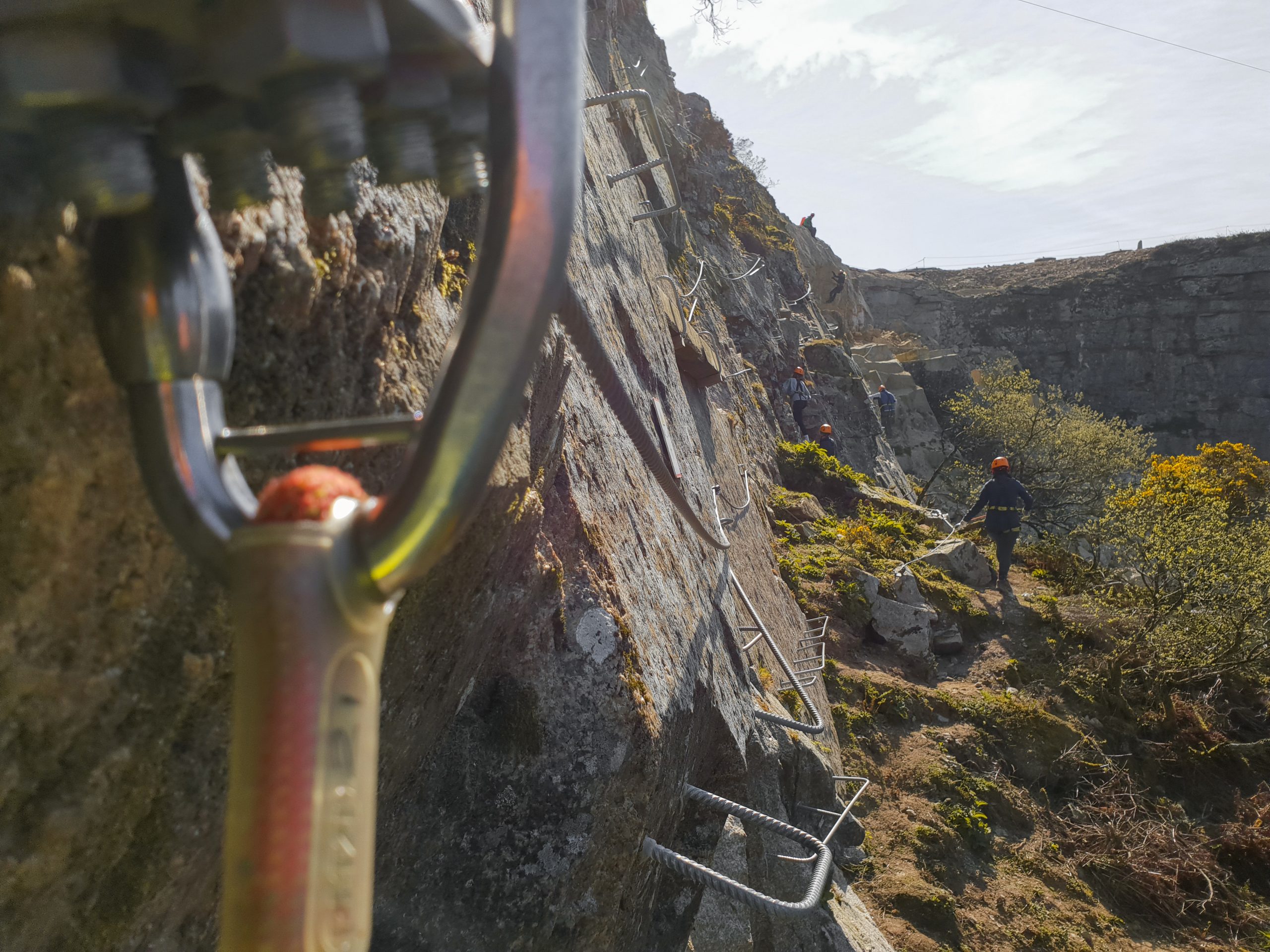 A few months ago, I was invited to Via Ferrata Cornwall – a brand new via ferrata in the UK and the first in the south west.

There’s a Via Ferrata in Cornwall?!

My thoughts exactly! I only found out about it because I was writing an article about via ferrata in the UK for MPora. July marked Via Ferrata Cornwall‘s 1st birthday, so it’s still very new – and you should definitely check it out if you’re in the area. It is just outside Penryn in a disused quarry at Goodygrane Activity Centre. “Building a brand-new adventure course was always going to be a challenge, but particularly in the middle of a pandemic,” explained Adrian Richards, CEO of BF Adventure (more on them in a mo). “We had months of landscaping, drilling and hanging off cliff edges to create the routes. With hundreds of metal rungs built into the rock, a 70m long high wire bridge and a zip wire stretching over the water, this was no mean feat.” It’s also the first and only quarry via ferrata in the UK.

Better still, all profits from Via Ferrata Cornwall go to its parent charity, BF Adventure. They provide adventure experiences for children and young people locally. If you’ve been reading this blog long enough, you’ll know I’m a huge supporter of outdoor education. With 7000 people visiting Via Ferrata Cornwall in the first year, around 100 children and young people have benefited each week through a range of 1 on 1 and small groupwork sessions.

There are two quarries at the site (one big, one little) with a car park, cafe and toilets. Plus it’s not just via ferrata any more! They’ve expanded the activities on offer this year to include coasteering (in the quarry), climbing, archery and water sports (stand up paddle boarding, kayaking and canoeing). There are also plans for a wild play area for children aged 1-plus and nature trails in partnership with Cornwall Wildlife Trust.

My Story – Getting there

It had been my intention to cycle to Via Ferrata Cornwall. I could ride to Plymouth and catch the train to Penryn via Bodmin. Its possible to take a bike on both trains without booking, at the time of writing. I would then cycle the short distance through Penryn and out to the quarry, have a few hours of via ferrata and then do it all in reverse: a great day out.

Sadly, this mini adventure is still only theoretical. I got as far as sitting on the first train when the announcement came that it was running late. No, not sheep on the line or a slow running local service. A piece of the viaduct had fallen onto the track and they were just checking nothing else felt like falling off too.

Twenty minutes later I’d missed my connection and had to bail. A couple of phone calls later and I was on my way again, this time in a car. Ah well, another time. Via Ferrata Cornwall is signed from the A394 Helston road.

How hard is it? Do I need lots of skills?

The via ferrata is not at all complicated to complete and great for beginners. However, it is a little unusual for a via ferrata as all of the lanyards are fixed. You never actually need to clip on or off of the course for the duration of each quarry. Let’s talk about safety kit first and we’ll explain how that’s possible in a minute.

Everyone is issued with a helmet and full body harness at the start of the course. Your instructor is on hand to help you out it all on correctly as well as give a safety briefing. You can’t use your own kit nor skip the instruction and go straight onto the course.

What might surprise you is that there is only one lanyard and it is completely fixed. Via ferrata is characterised by a pair of lanyards made of stretchy material and a shock absorber, plus two quick release karabiners. Here there is a single short rope with a fixed position metal hook at the end.

BUT this is actually a very smart solution for reducing risk for beginners and children. The course is designed so you should never be above your connection point. That means no dynamic falls. And with a fixed hook, there’s also no chance of detaching yourself by accident.

So how to you move along the course? The metal hook is fixed at just the right distance that it can be slid over the metal plates used to bolt the wire to the rock (see picture). You slide your hook on at the start and are connected until you finish. If you need to bail at any point, your instructor has a key which can release your hook and get you off.

The Route: Via Ferrata Cornwall course

We were in a group of 8-10 people, with one instructor for the adventure zone and two for the big quarry. The route we were doing is called the Full Classic: both quarries plus a zip wire. Our instructor met us by the entrance and we all got kitted up by the viewing area below the cafe. Behind the picnic benches is a drop straight into the first quarry.

The adventure zone eases you into the idea of via ferrata and how your hook-lanyard system works. You walk down a steep path into the small quarry, around the water’s edge and to a small platformed area: the start of the training zone.

This section is set up to make sure you understand how to do everything you need (or might need to do). It starts off fairly basic, like how to slide your hook over the bolting plate and not to have more than one person on each section of wire at a time. Then you move to something a bit more vertical, traversing along the side of the quarry, a short distance from the ground. Again this gives you a chance to do things like hang off the course to reassure anyone worried that the lanyard will hold them. Plus practice shouting for the instructor in case you ever need help later.

If anyone has decided by this point that it’s simply not for them, they can stop here and get a full refund. Otherwise, training complete, you move up the quarry wall and onto a long wire bridge over the water. Yes, it does move. But it’s also fairly sturdy! At the end, you clamber up the rock face and back to the gravel patch you started on. Only at the top do you slide your hook off the end of the wire.

Next up, is the big quarry. We were joined by a second instructor (both were really friendly by the way) and walked a short way to the next quarry. It turns out that I’d actually met the first instructor before through Mountain Rescue. Small world, the South West.

This time, we started the via ferrata at the top of the quarry. The route descended to near the water line, then wound its way back up in zig zag from bottom to top. At the corners are clever devices that allow you to change the direction of your hook. They’re a little fiddly so there’s an instructor on hand to teach you and check it works fine.

You’re scrambling along the blocky edge of the quarry, slowly getting more vertical as you zig zag up. There are rungs and boards to put your feet on and although the instructor isn’t right beside you, like in the last quarry, they’re never too far away.

The water in this quarry is really deep. This is where the watersports activities happen including coasteering and paddling.

The final part of the experience is to do a zip wire across the entire quarry. Unfortunately for us it was way too windy to do. You can’t tell from the pictures but it was so windy anyone spectating got into their cars after 30min.

Our instructor did test it out just in case. But as the wind was blowing directly against him, he stopped right in the middle and had to haul himself to the other side along the wire. It’s a shame because it’s nice and high, but we were all given vouchers to come and do the zip line another time.

Via Ferrata Cornwall was a fun day out. It’s ideal for newbies to via ferrata due to the simplicity of gear and fairly easy course. It would be fantastic for children, or beginners who want the thrill of via ferrata without the exposure you might find in high mountains.

I’d say the difficultly level is about the same as Go Ape, just with rocks rather than trees. In the same way, it would be a fun day out with friends regardless of your climbing experience and abilities.

8 Things You Need To Know About Via Ferrata

Is Go Ape Worth It For Climbers And Mountaineers?