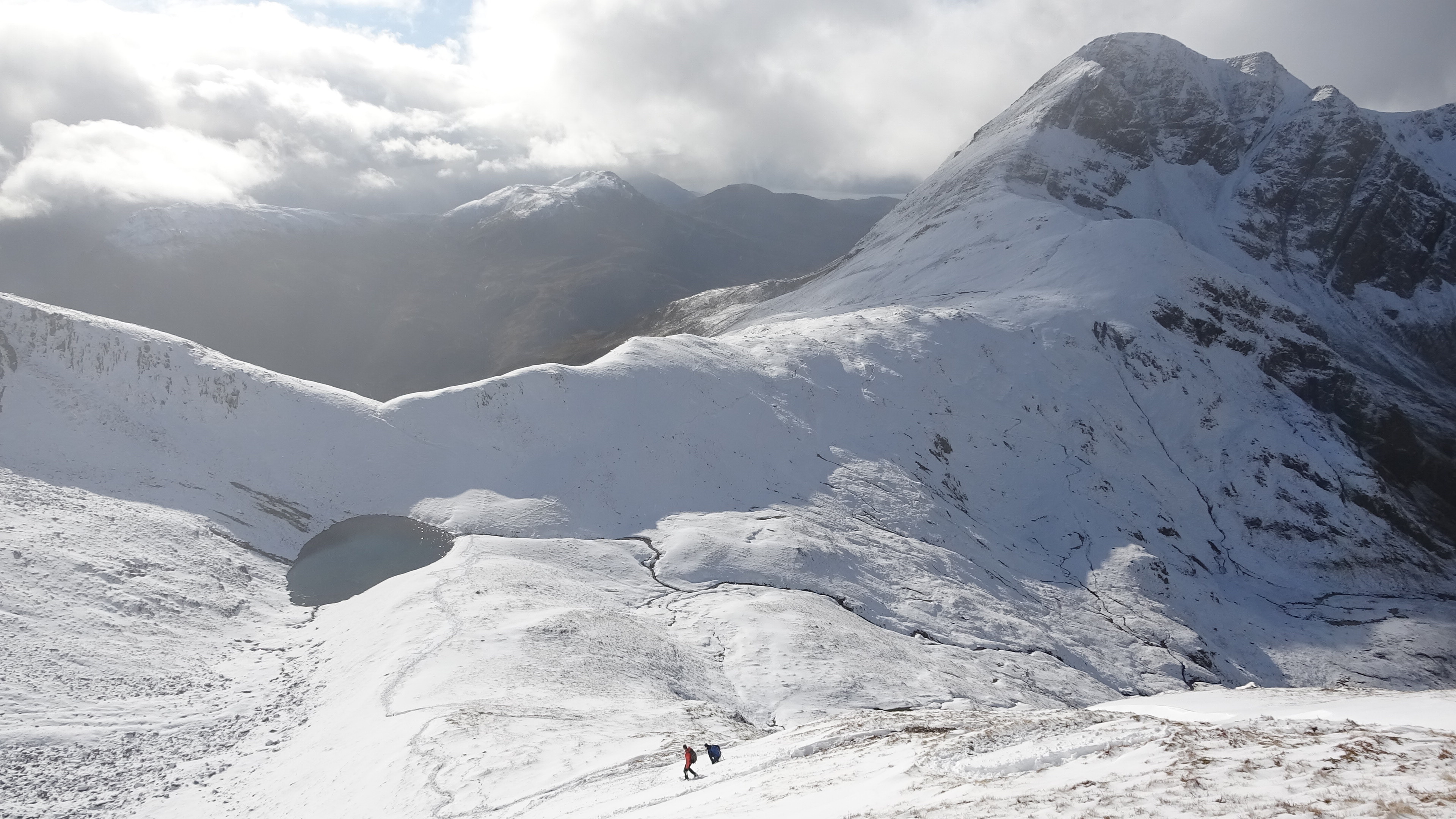 Google maps says that it takes nine and a half hours to get to Glen Coe. On 3rd March 2019, we arrived at our mountain cottage for 10:30pm – after a mammoth 15 hour journey. It was the sort of trip that people make comedy movies based off… Me and 3 guys in a little blue van, plus a lot of kit and a dog called Oscar. Several coffee breaks, 1 hour of stationary traffic and a lot of bad karaoke later, we arrived in the Scottish Highlands.

Let me give this trip some context. We are a bunch of friends who know each other through Dartmoor Rescue. Unsurprisingly, we all like mountains. You have to really like mountains to want to make that enormous pilgrimage from Devon to Scotland…

For me, this was a revisit to an area I’d missed out on. The last time I was in Glen Coe was for a week away with my university walking club. We used to do a week away in Scotland after exams. At the time I was the President, but I also had something wrong with me which meant I couldn’t walk up hill. Okay, so I could but extremely slowly.

I did some small peaks on my own and the last day of the West Highland Way with a group. (It was hilarious – everyone kept asking us about when we’d started. It was like joining the after party for an event you haven’t attended!) Plus I wouldn’t let it stop me from doing the Aonach Eagach. Took me hours to get up to the ridge, but after that it’s basically flat or downhill 😉

Anyway… I digress. I guess what I’m saying is that I had unfinished business with Glen Coe!

Brilliant Day on the Buachaille

One of the mountains that everyone went up during my uni week in Glen Coe was Buachaille Etive Mor. So, since it was so close to our cottage, I suggested it for the first day’s walk. The main item of the week was going to be Ben Nevis, but it was generally decided to have a “warm up” day first.

The weather was meant to be pretty average. There was low cloud over the tops and all we could see was the drab green of damp grass. Why had we driven 600 miles for what we could see on Dartmoor? Never the less, we set out.

From the carpark it looked a bit snowy on top. But the cloud was coming in again and, as we started out, it started to rain. Yipee. We fairly quickly decided to split into two groups of 3 and the younger bunch marched up to the snowline. Up a snow gully and all of a sudden we were in proper winter conditions.

I’m sure it didn’t happen quite like this, but this is how I remember it:

The rest of the day turned into a peak bagging frenzy.

We basically did the whole ridge, even though that involved going back on ourselves several times. I would tell you all the peaks we did but, frankly, I can’t pronounce them. So I’ve drawn our route out for you on a map instead…

On the way down, we met up with (and then overtook) the other half of our group – sorry guys! We reconvened at the Clachaig Inn for a pint, a pool game and then some dinner.

The Quest for Ben Nevis

The big aim for the week was Ben Nevis. I can feel myself going off on a 5000 word blog post (!), so I’m going to shorten things for you. After the “warm up” day on the Buachaille, we can summarise the remaining 4 days as “trying to get up Ben Nevis”. Bob got us memorising the bearings off the top in preparation!

Day 2, successfully warmed to the idea of climbing big hills, we headed out to climb Ben Nevis via the CMD route. Dutifully, we got up early and drove to the North Face Car Park, where the route starts. At the entrance to the carpark was a large lorry/van/works vehicle, unloading. It fitted squarely across the entire width of the road.

A chap came over to talk to us:

“I would go round if I were you. We’ll be a long time here unloading. If you go back to the junction, turn right and then it takes you right round to the other side of the carpark. There’s a gate, but there’s always someone there to unlock it. We often take the works vehicles round that way.”

So we began a 3 car convoy (two of ours and 1 another group of walkers who’d been first in the North Face Carpark queue) trying to locate the back entrance. After driving through some open gates and tracks we probably weren’t meant to and reversing back again… we ended up at the main carpark. We’d found the route the man had intended, but the gate was locked. There was no one there to open it.

By this point it was 10am and way too late to start the CMD from the ski center car park. So we changed our route. Instead, we drove round to Glen Etive and did an incredible day on the Mamores (only hampered by 2 mobile homes blocking the road for 15 min).

The next day was a write off. The forecast was so bad (and by bad I mean windy) that we couldn’t really do anything. Fresh snow was coming down and there wasn’t much else to do than kit shopping in the morning and climbing in the afternoon.

We set out for our next attempt on Thursday (day 3). Everything went to plan – up even earlier, forecast reasonable, mood decent. That is until we reached the 4G near Kinlochleven and someone re-checked the forecast. Ah.

Cue another change of plan and a mediocre walk on the other side of the Mamores, starting from Kinlochleven. I say mediocre, because the snow line had got higher overnight… meaning more trudging in drizzle before it started snowing. It was also very windy on top towards the end of the day. Nothing like horizontal hail in the face, eh?

That night, we replanned and reassessed. The outlook for the next day looked alright-ish. We said we’d go do Ben Nevis unless it was abominable weather. MWIS said “mobility difficult (at times arduous)” which – if you’re familiar with their lingo is not too bad. If they don’t want you on the hill, they’ll say “mobility torturous”. The avalanche forecast was Moderate, showing localised hazards on Eastern aspects.

Long story short, we didn’t go. Whether it was because everyone was fed up of trying to get up Ben Nevis, or because of forecast conditions, or because of looking out the window at 7am.

I’m finding this quite hard to write about because – as you can probably tell – I wanted to go. To be honest, I didn’t really care whether we did the CMD route or not. All I wanted was to stand on top of that mountain. But you have to go with what the rest of your group wants. No one else was interested and I respect that decision. Plus there was no way I was going to do it on my own in marginal conditions.

That night – our last in Glen Coe – we were merrily eating homemade pizza (thanks Nathan). Tucked up snugly in our cottage we were reflecting about the trip and commiserating about Ben Nevis.

Only 2km down Glen Coe, Mountain Rescue were out searching for 2 climbers who’d failed to return from their trip up the Buachaille. A helicopter spotted evidence of an avalanche. (The forecast was Considerable for Glen Coe).

As we left Scotland for home, we drove past the Mountain Rescue RV – it’s hard to miss red jackets and high vis vehicles. The two climbers were out overnight and found midday on Saturday.

Only a few days later, 3 people died in an avalanche on Ben Nevis. Looking at the avalanche forecast (High) there is no way we would have gone up that day. But it really has hit things home for me. People do die on the mountains. People also make their own decisions. It’s all about a balance of risk vs potential reward.

I guess its just given me a big reminder. It could be me.

How I’m Preparing for my Winter MLT