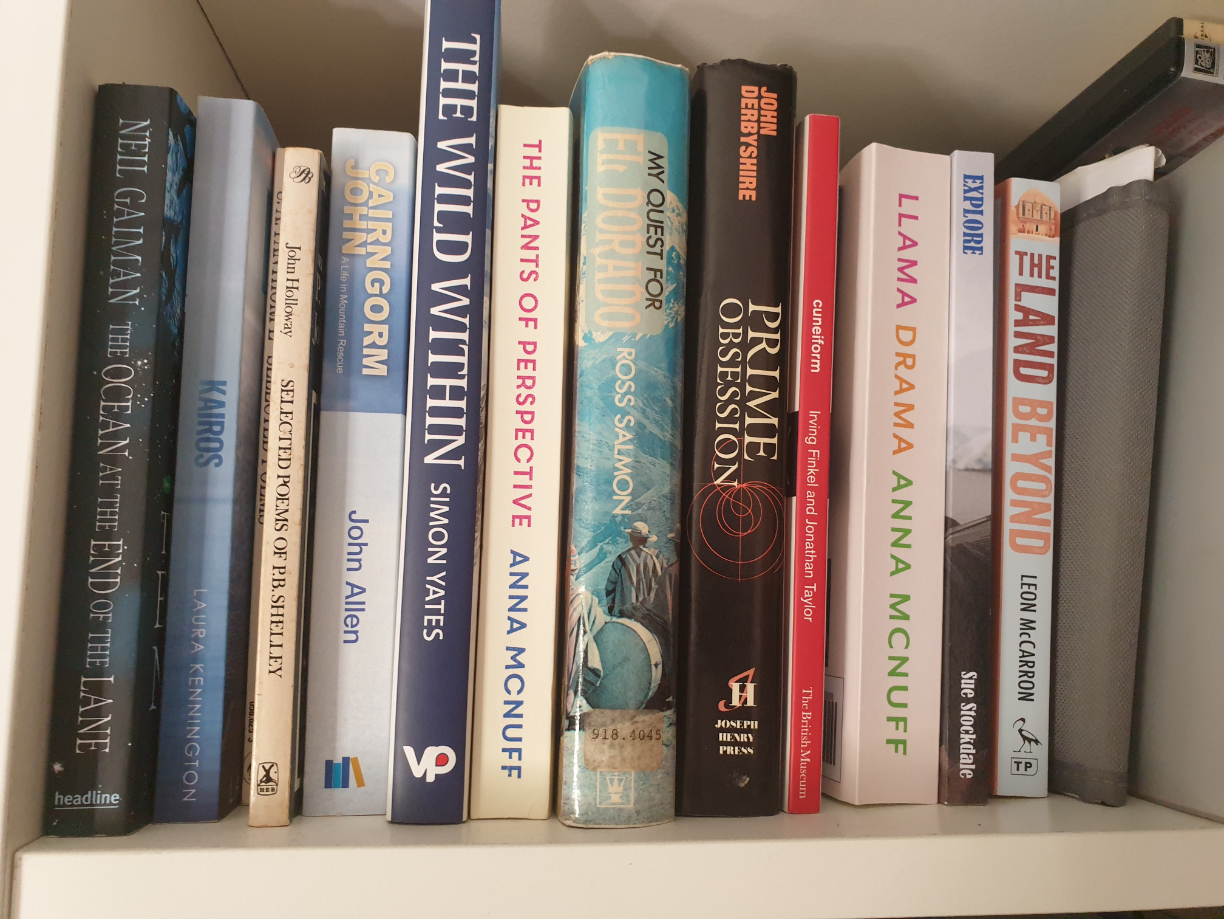 There are so many wonderful adventure books coming out at the moment. Although I get to share lots of adventure narratives through Intrepid Magazine, I rarely showcase any guidebooks. Or frankly anything not in a story format. Yet the vast majority of the books I own fall into the non-fiction category.

So here are three up and coming guidebooks, written by great people, that you might find interesting. Bonus points if you recognise any of the books in the top image. It’s a genuine shelfie of one of my bookshelves. So yeah, it’s not entirely adventure – and was isn’t adventure is really rather telling actually!

Running Adventures Scotland by Ross Brannigan is another beautiful guidebook from Vertebrate Publishing. Easy to read, full of mountain trails and large maps. Ross sent me a copy and I’m going to take it with me next time I’m up in Scotland. My running journey is going slowly, but I still want to try some of these routes. Especially to explore my new favourite part of Scotland, the Cairngorms.

Well you can guess from the title: people who want to go running in Scotland and would like some ideas. Scotland is a pretty big place, though. The book includes 25 routes spread across most areas, with a higher concentration around the Central Highlands – Cairngorms strip.

I’d also say this is a book for people who like going on long walks, often walk 20km or more on a day walk and are fed up of walking guidebooks erring on the side of slow and inexperienced. It’s completely understandable why they do it, but in the absence of a “hard” walking guidebook, a fast walker could definitely do these routes.

Stand Up Paddleboarding in Great Britain by Jo Moseley is the first SUP guidebook out there for the UK. I’m very excited for her. We met on Twitter years ago, made it real at a WAEXPO (or possibly the SheExtreme that same weekend) and have been friends ever since. When we met up at Kendal Mountain Festival 2021 this was still a bit of a secret – I’m delighted it’s out in the world now!

There are guidebook writers and there are guidebook writers. I know Jo has gone about this so thoughtfully: doing each route with local paddleboarders, considering the impact a guidebook might have on an area, telling stories not just giving instructions. What more could you want? It’s probably time I begged, borrowed or bought a SUP myself to try one out! (Remarkably I still haven’t written about how I learnt to SUP at midnight in a dark sky reserve in Ireland… When I do, I’ll link it here.)

Jo has also written a fantastic piece in Intrepid Magazine about the whole process of how to write an adventure guidebook. Taking you through everything from the crazy idea, how to pitch and all the steps to publication. It goes live this Wednesday. Sign up to Intrepid to get it in your inbox.

Anyone looking for ideas for where to go paddleboarding in Great Britain. Whether that’s because you’re new to SUP or just like having a GB-wide adventure ideas list for planning your next trip. But it’s also for readers who like stories and people, not just a straight list of instructions for a route.

Dartmoor Geology by Josephine Collingwood is another book I’ve watched come into the world. Subtitled “An Introduction to Dartmoor through Deep Time – its Geology, Tor Formation and Mineralogy” this is a deep dive into why Dartmoor looks the way it does. Josephine is a friend of mine and she’s been working on this book for years. One time I bumped into her on a mountain bike and she was like, “Oh, I’ve just been out photographing Hurdwick stone.” Right… A lot of dedication has gone into this book. And before she became a photographer, there was a geophysics degree, so she knows what she’s talking about!

Put simply, it’s for Dartmoor Nerds or geologists. If you’ve read All the Tors, then probably at least a Level 2 nerd 😉 But seriously, it’s for anyone who’s got a deep interest in Dartmoor and what makes it the way it is. Whether that’s because you walk the moor often, you live on it, you take groups out on it – or are just curious about rocks.

“More books!” I hear you cry. Okay, well here’s all my book reviews. I don’t do them much, but I do write a lot about writing. Want to know about the book I’m writing at the moment? Then you need to be in the Adventure Squad newsletter! If you’re new to the blog (hello!) you might want to start here first. I’m a female adventurer based in the UK.