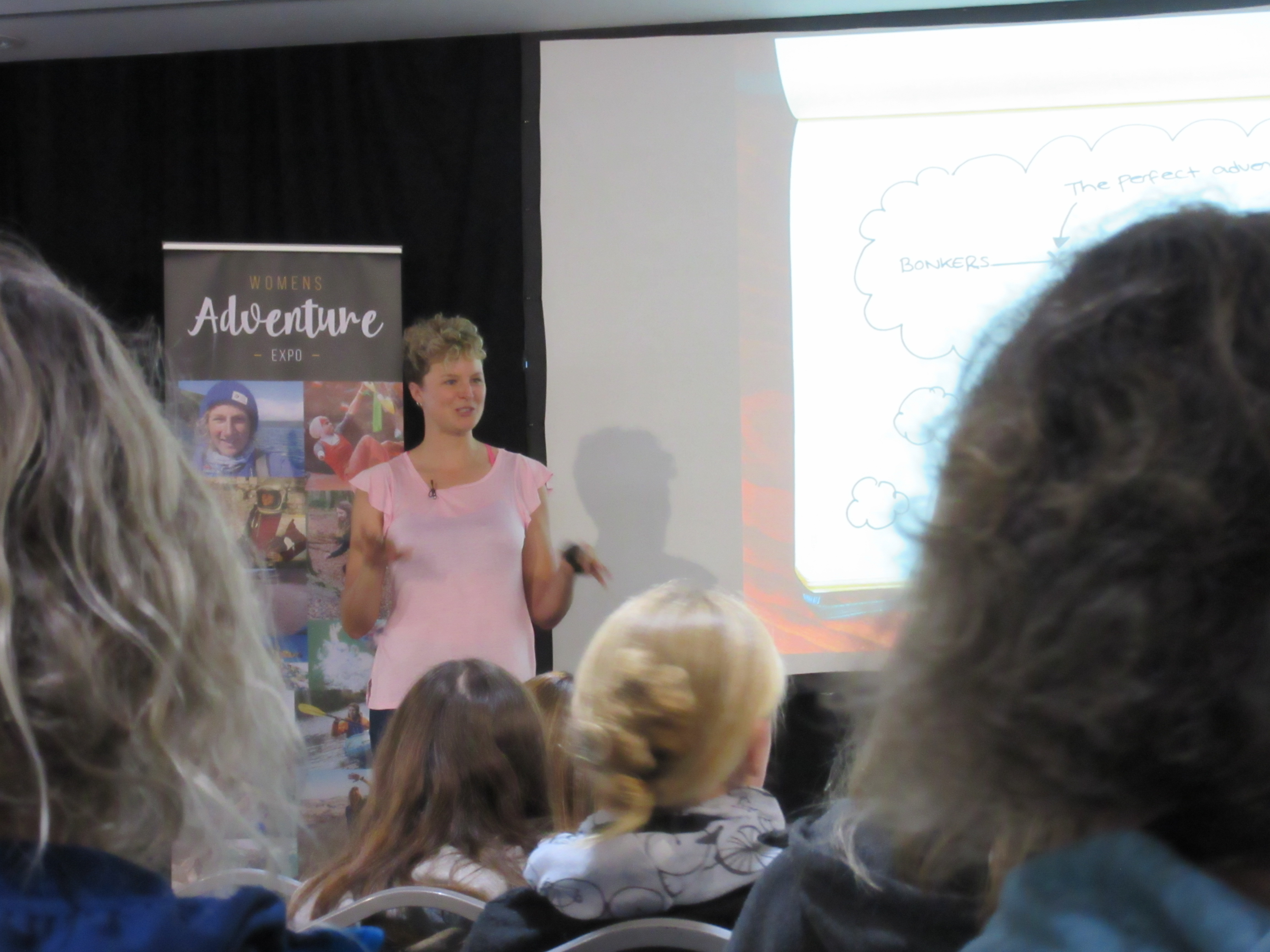 I was lucky enough to be given a ticket to the Women’s Adventure Expo last weekend. I wasn’t planning on going. In fact, it’s incredible I even ended up there! Let me tell you the story:

Sometimes, I listen to the Tough Girl Podcast at work. Surprisingly, it makes my day more motivated (rather than just lusting after adventure) and at the end, Sarah was talking about how she’d decided to go to the WAEXPO because someone in the tribe was offering lifts. Now, the tickets aren’t cheap but I thought maybe it’d be okay if I didn’t have to pay loads for the travel.

So, I’m at work, but we do some Facebook advertising so I was on Facebook already and I… well for a split second I ended up on the Tough Girl Tribe Facebook group. I really should not have been there, but I thought a glance probably wouldn’t hurt…

This is what hit the top of my screen.

WHAT?! I couldn’t believe it. I just stared at it for a minute. But my brain was like, “Oh heck, I’m at work. I can’t be staring at this. I need to make a decision right now.”

I hadn’t even decided if I really wanted to go and it seemed wrong to express an interest if I wasn’t sure. Don’t know about you, but I do believe in things happening for a reason and, seriously, if a chance as small as that throws itself your way, you’ve kind of got to jump on it! So I did. And promptly closed the window and got on with my work!!

So this amazing lady Robyn sent me her ticket and I went to the Women’s Adventure Expo! If you’re reading this Robyn thanks so much again – you’re a legend 🙂

Anyway, I promised you guys I’d tell you my four big take-aways from the event, so without further ado….

“Where have you come from today?” asks the lady in the lift.

“Totnes,” I tell her, truthfully.

“That’s a nice part of the world,” she says.

The lift opens into a large room crowded with people, split by about 20 rows of seating and a stage. It was something out of an introvert’s nightmares.

“I’ll see if I can find you someone else from Devon,” she says (she is, I think, one of the organisers).

“In fact,” she grabs the attention of an unsuspecting passer by, “here’s someone from Brixham. This is Emily from Totnes.”

She pairs us together with a smile and walks off.

Now, I’ve never been very sure where Brixham is in Devon. It’s definitely on the coast and it sounds a bit north Devon-ish. Maybe? But since I’m not actually from Totnes anyway, it’s hard to comment on how near it is or what the area is actually like. Which floored me for small talk.

But for some reason, I persisted in pretending I was from Totnes. I guess it seemed easier at the time than explaining that my lanyard said I was from London because of my Adventure Angel from the Tough Girl Tribe and that it was all so last minute I’d stayed the night in Totnes because it was on the main train line and meant that I didn’t have to get up obscenely early to get to Bristol in time… Yeah.

Luckily, I was mistaken for being in the queue for a free water bottle and we made our parting. I’m sorry Jennifer (I think that was your name?) at least now you understand why I was a bit awkward…

I floated round a bit before the talks started wondering at all these interesting adventurous women. Feeling like I didn’t really belong there. Or did I?

Every person I sat down next to in a workshop seemed down to the ground. They were real people and they also, for some reason, couldn’t appreciate the aspects of their life that I found cool. I met Lucy in Bex Band‘s talk about adventure branding who works for an SUP company selling their boards. She seemed surprised when I thought that was awesome. I also met Beth in Sian Lewis’ Blogging session who casually mentioned that she had jumped out of a plane over 100 times. You should have seen my face.

Yes Beth, but I think it takes guts to jump out of a plane even once.

TAKE AWAY: We don’t appreciate the things we do every day. They’re so much a part of our life that we forget they might be interesting to other people.

2. Even the “proper” adventurers are winging it

There was a running theme through the stories that each of the speakers told us (yes, a theme other than adventure…). I wasn’t taking notes, so I’ve paraphrased.

People ask me how I find out editors’ emails and I just do the same as everyone else. Stalking. I scroll down through their Twitter feed until I find them giving it to someone else…

… people think you’re off going amazing places, when actually it’s just me sitting in bed in my pyjamas (gestures typing on a laptop)…

… we’re all just making it up as we go along!

3. Thousands of social followers doesn’t stop you from being a person

I was running late. Not quite literally running, but an Emily-special power walk in what was hopefully the direction of @-Bristol (now “We the Curious”), paper map scribbled out from Google in hand. I crossed the bridge and, thankfully, saw the enormous sign over the entrance to We the Curious. Phew. Give me the moors any night, but I find navigating in cities confusing.

I slowed down and looked at the people in front of me. The one just ahead seemed to be carrying two coffees. She was wearing a bright blue down jacket and had short brown hair died blonde at the top.

The human brain is incredible. How on earth we manage to recognise people from behind I don’t know. In fact, I’m almost certain I’ve never actually seen her from behind, but there we go.

Late brain was still power walking and I caught up with her as she stopped to put down a coffee. I have never met Anna, although I feel like I know her and may have claimed once that I did (in a way somewhat hilariously similar to how Anna claims to know Sarah Outen in her NZ book). We’ve chatted a bit on Twitter and I’m one of her Chief Queens (aka group leaders) for the Adventure Queens, taking people wild camping on Dartmoor.

Put simply, I think she is awesome.

But, I thought, it must be quite annoying being bothered by all these people who follow you, even before the event has started. I guessed it was like being famous and just trying to walk down the street to get a coffee. So, I started to sneak past, giving her a smile as I walked past.

“Hello,” I think I might have managed – exceptionally surprised but beaming.

“It’s great to finally meet you and your awesome hair.” (Don’t ask…)

At this point I was completely star struck. I have never had the opportunity to meet someone who I really admire. As a child, every one of my favourite authors was dead before I read their book. J.R.R. Tolkien, C.S. Lewis, Arthur Conan Doyle – I would have loved to have written you guys a letter, age 12. Lemony Snicket, maybe I should have tried…

“Have a hug. Nobody gets away without a hug.”

I really do believe now, Anna, that you ran the length of New Zealand hugging everyone you met.

“I went to get me and Framps a coffee before we get started. I was just stopping to get a photo.”

And basically ran away…! Only later did I realise that I hadn’t actually said much at all. Ooops…

Throughout the day I was surrounded by people who I follow on social media and many who follow me too. I had the pleasure of meeting and chatting to some of them – although I chickened out of going to speak to Sarah Williams of Tough Girl Challenges, even though she was only a couple of rows in front.

Why though? Why do we associate having a number in the thousands below a profile picture with being aloft, aloof and not ‘like us’? Behind that profile picture is a real living person who wants to talk to other women about adventures and give out free hugs.

I’m close to 1000 followers on Twitter now and I would be delighted to meet any of the amazing outdoors-y women who follow me. Why should adding a zero make things any different?

TAKE AWAY: Behind each social media account lies a person just like me and you.
Don’t forget that!

4. Nothing beats doing things in person

Never have I ever been to an adventure festival, meet up or anything. This is partly self inflicted – I spend a LOT of time volunteering on the weekends (which often involves more wild camping, yay!). But I look at the ticket price and how far away it is and think… maybe next time.

I wish I’d been to something as epic as this before. It was amazing to meet so many adventurous women and for us all to be in the same place. But it did also make me think.

We, particularly bloggers but other adventurers too, spend so much time squirrel-ing away on the internet. If you want to become an adventurer, you are advised to start a blog and get some social media accounts. You need to build a following, start doing brand collaborations and then maybe your story will be picked up by the press or a publisher.

Reader: if you want to become an adventurer, go on adventures.

You can post as much as you like on Twitter, you can diligently type War and Peace into WordPress, post by post. But nothing beats showing up to an event and telling people your story. Because real relationships are built outside of the internet. Communication face to face is so much more valuable than screen to screen.

The women in adventure movement is growing and it was only really clear to me that day, sitting in a room of hundreds of like-minded women. A crowd is so much more powerful than a follower count. This is why I think having a print magazine would be brilliant, even if print magazines are apparently a dying industry. A physical object is so much more emphatic than text on a screen. It’s tangible.

So please be inspired! Get out there and do things in real life. Inspire others to go and have adventures too. Be brave, be bold and have fun.

If you were at this year’s WAEXPO then please do drop a note to say hi below. I wish I could have had time to meet you all!

3 Adventure Festivals in One Weekend?