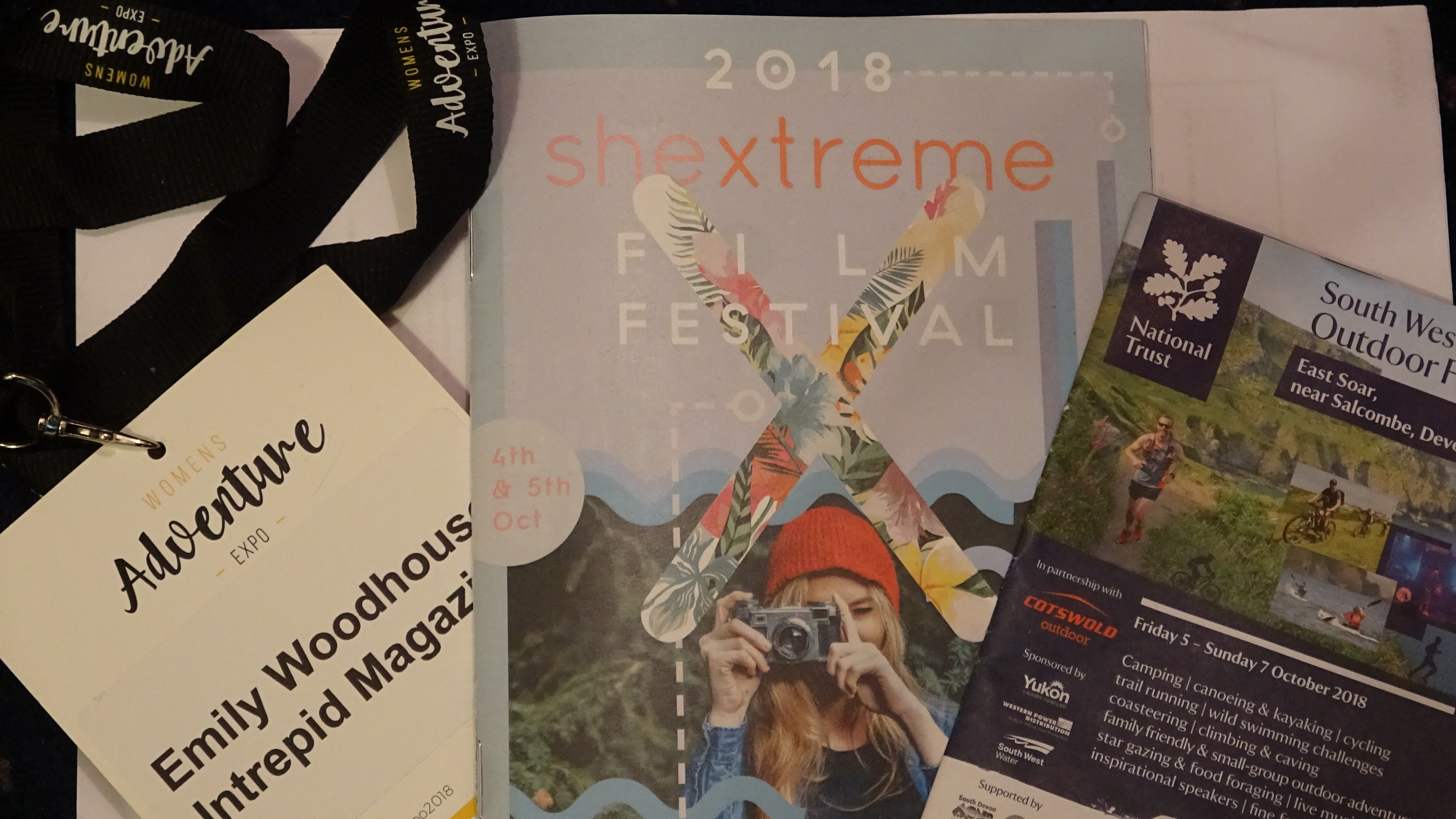 Last weekend was what you might call A Classic Emily. For some reason, everything was happening last weekend (6th-7th October). There were so many exciting outdoor and adventure things going on. I was way more than double booked.

Instead of picking just one, like a normal person, I tried to do all of them.

Okay, that’s not actually quite true. I turned down the ultramarathon in Jordan and doing first aid cover for a walking event on Dartmoor. What did that leave me with? The Shextreme Film Festival in Bristol, followed by the Women’s Adventure Expo on Saturday. Then heading back down to South Devon on Sunday for the South West Outdoors Festival.

I was a judge for the Shextreme Best Blog category. Then I was volunteering on the bookstall at WAEXPO and selling Intrepid magazines. Quick train ride, then car drive and to give a talk about All the Tors at the SWOF. Simple, right?

One of Those Weekends

The 5pm train to Bristol on Friday was running a little late. It also happened to be the London train – very busy. So busy, in fact, that it was awkward editing videos for my SWOF presentation. The 15 year old sitting next to me was definitely watching clips over my shoulder. It’s weird cutting footage which is mostly your face in public. Plus a track pad and the speed of my laptop don’t bode well for processing 4K footage… Progress is slow.

Quick change of train at Exeter and I decide to check emails on the dodgy train WiFi (remember I don’t have a smart phone). There’s an email from Tania, one of the ladies behind WAEXPO. As I read it, my stomach hits the floor.

Where were the magazines sent? They have not arrived at Create or We The Curious. I have been at both places today.

We printed extra copies of Issue 5 and the printer had sent them on Monday to the WAEXPO offices. I was very clear they had to arrive before Friday. He said they’d arrive on Wednesday.

I copy the chap I’ve been dealing with at the printers – we’ll call him Chris – into the email thread. Has he actually posted them? Has he had a delivery confirmation? We need to track these magazines down.

Then the WiFi cuts out.

I arrive at Bristol a bit too close to 7pm, when the Shextreme film festival opens its doors. I didn’t want to take my huge holdall into the festival (my Mountain Equipment 40L handbag…), so I leg it down the YHA first. The screening starts at 7:15, leaving me almost enough time to dump my stuff an run back to the station.

The Shextreme Film Festival 2018 was held at Loco Klub, a club (I assume) in what looks like the cellar of a castle. That is, except this amazing turreted building is right next door to Bristol Temple Meads Station. I hit the back of the queue at 7:15. Phew.

There wasn’t a lot of choice of seats by the time I got in and the first film had already started (just). The only other film festival I’ve ever been to was Banff on tour in Exeter, so it was interesting to compare.

The evening was split into several sections. We had half the films, then an interval, then prize giving, panellists, poetry recitals and second half of the films. There was more after that, but they were running a bit late and it was already 10:30. I couldn’t justify staying later what with tomorrow’s early start.

Honestly, the films weren’t as “Extreme” as I was expecting. Some were high-drama, with epic long shots of women bombing down snowy mountains. Others were about urban sport and community. The downside to scraping in just on time was that I couldn’t see the subtitles on the non-English films. Ah well.

Youth Hostels are strange places when you go on your own. I shared a room with three other girls, but I’ve no idea what they looked like. All I know is that two of them arrived at 1am and one of them snored. They were all still asleep when I left at 8:15.

So, the magazines. Tania and Chris had been exchanging emails last night. Apparently the magazines had been booked in for a Saturday delivery all along. Unfortunately, the Create Centre is shut on Saturdays, so there would be no one at the office to take the delivery. The courier wouldn’t rearrange the delivery location. Perfect.

The solution was that the courier would ring Tania before 9am and I’d take a taxi to the Create Centre to sign for the delivery. Then I’d bring the magazines back in the taxi for the WAEXPO book stall. Sounds a bit ridiculous, doesn’t it.

Last year, I wrote a blog post about my first experience of the Women’s Adventure Expo. It was the first adventure related event I’d been to. The magazine didn’t even exist back then! I went around the talks on my own, introducing myself to the people I sat next to and making acquaintances. I felt like an imposter in the big world of adventure. Open it in a new tab and have a read now, if you haven’t already.

The enormous difference this year was that instead of me going around saying, “Hi, I’m Emily, I don’t know anyone here. Nice to meet you.” Other people were coming up to me and saying, “Hi, are you Emily?”

It was lovely to meet so many people who have been involved with Intrepid Magazine – either as readers or contributors, plus Twitter friends. Like I said last year, nothing quite beats doing things in real life.

You might be able to guess where this is going. Did Tania get a phone call? Nope. Did the magazines arrive? Nope. At least, not until about 4pm on Monday.

Luckily Tania had a copy of Issue 3 that people could look at, but it wasn’t quite the collaboration we’d planned… Either way, I helped out on the book stand because I said I would (making friends with the lovely Medina and Rosemary).

But, I still had to get back for the SWOF and I hadn’t finished my presentation yet! I’d spent the time I was going to use finishing it trying to solve the magazine saga. So I left the EXPO early and took a train back down south, video editing and writing notes as I went.

A few hours later, and a slightly frantic finish. I was eating dinner whilst the presentation video exported (thanks for cooking Joe).

I pulled off the road down a long gravel track in the dark. Sounds silly but it was the first time I’d ever driven somewhere that I’d never been before, since I passed my driving test. Says something about where I drive maybe!

Luckily, the SWOF was very well signed. There was a warden to greet us at the entrance to the parking field.

“Hiya, I don’t actually have a ticket. I’m speaking on Sunday and Paddy just told us to come camping.”

The second event of the weekend that I didn’t actually have a ticket to! Not a problem though.

“Just head over to the red tent lit up over there,” said the warden. “They’ll sort you out.”

We parked the car and headed over to the glowing red National Trust tent. It was empty. Ah.

There was no one else about and it was already pitch dark by now. With arm-fulls of stuff and camping kit, we looked around us. The small fields on either side had tents in them. On the left were big family tents. On the right smaller backpacking tents. We ducked under the ropes on the right hand side and set my tent up.

Not really sure if we were meant to let ourselves into the festival like that, but never mind…

After a nice evening listening to Conrad Humphreys talk about sailing to Australia and some live music, we woke up to a gorgeous sunny day. And two packets of crisps being dropped beside our tent… It was windy, yes, but with a beautiful view out to the coast. We went for an early morning walk and almost got caught up in the 5k run.

By this point, we had gone back to the red tent and signed in. They were a little bit flummoxed, but my name was on the list and I was given a silver wrist band with “Performer” written on it. This was getting a bit serious!

I’d never given a presentation at a festival before. Or indeed at anything since my 6 minute presentation for my 4th Year degree project. It was about p-adic numbers and finite field theory, so almost no one in the room understood what I was on about anyway.

By the time it was nearly 1:00pm I was already incredibly nervous. To give you some context, I was the kind of girl at school who would wait right until the end to volunteer to give her class presentation. You know, until there was definitely no escape but there was still chance you might have been forgotten.

At SWOF I was thinking of all the reasons it wouldn’t work. All the things I’d do wrong. I was hoping that no one would come, or that I’d be forgotten about. I’m not much of a talker, really. But that’s kind of why you have to force yourself to do these things. Sure I can go wild camping for 10 days on Dartmoor and survive, but putting me in front of an audience is waaay out of my comfort zone.

The room was full of applause. I’d got to the end of my presentation. No one was jeering at me. I was asked several good questions as though people were actually interested and had been listening. Incredible.

Thanks very much to all the three events for inviting me. I’m glad I managed to pack it all into one weekend, but I don’t think I’ll be doing a weekend that busy again for some time! Maybe when it’s been long enough that I’ve forgotten how stressful it is. Fun, but exhausting.

Catch Me If You Can