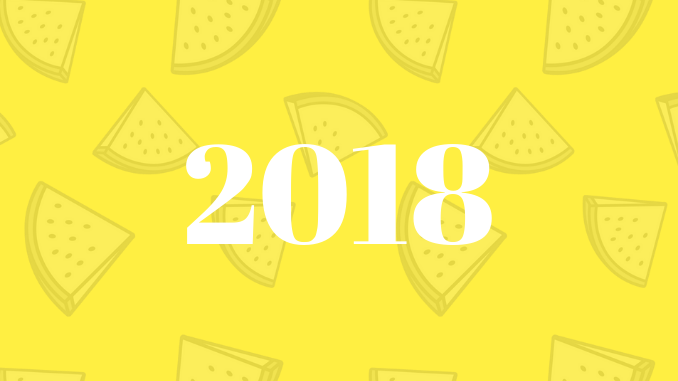 Wow, 2018 – you’ve been a roller coaster of a ride! I thought you were going to be a tough one and I was absolutely right. But here I am making it out of the end of you.

Looking back at my 2017 post, I can’t help but laugh at what I’ve written at the top. That I thought 2017 would (finally) be the year that everything went right and I sorted my life out. What a joke. I’m almost certain life doesn’t work like that any more.

So, here’s my highlight reel of 2018. Remember this is just the good bits. In what’s been a really hard year, it’s been good to look back and count my lucky stars. I’d highly recommend it!

January – I Started A Flippin’ Magazine

The first ever issue of Intrepid Magazine came out in print at the beginning of January. It was something of a rocky ride. For example, here are parts of a blog post that I never finished writing about the start of the magazine.

“I was running late for my second print deadline. Literally. I’d missed the first a few days ago and was now jogging across town to catch the next. It was already dark as I ran through the slightly icy park, past groups of loitering teenagers playing loud music.”

“I was on the way to work, hunched over my laptop at the back of the bus and willing the free WiFi to work a little faster. Come on, you can do it!”

Basically I have learnt to expect that anything that can go wrong will probably go wrong… Once you’re expecting it, it makes it easier to catch things as they fall. That said, here we are one year on and with a magazine that people want to read. On a good day, it makes my heart glow.

My rationale behind starting a magazine in these posts:

My 6 monthly update is here: Behind the Scenes of Intrepid Magazine

Entrepreneurship is not easy. By and large it is a hard and lonely process. But the rewards (when they come) are worth it. I write this to encourage future me and anyone else currently wrestling a small business into existence.

February – Winter in the Lakes Again

This year in the Lakes was pretty much a winter skills crash course for a friend. He had never been to the Lakes before, never mind done any mountains in winter. We started small and I’m pretty sure that he’d had a comprehensive course by the end of the week.

Andy and I took him up Scafell Pike for the first time (in almost complete white out) only to be met by two guys at the top smoking weed and wearing trainers. We were more than slightly concerned.

I got to practice some navigation in complete white out and finally understood the meaning of “cragfast”… Or at least how people can get themselves cragfast. This involved a slightly sketchy moment on Sharp Edge where I had to put crampons on in a bad place. Everything was covered in ice and I was balancing on not much with a sheer drop down to the tarn in front of me.

This is not something I’m proud of. I share it as a highlight because I think it marked a pivot in my attitude towards winter mountaineering.

March – Will it Ever Stop Snowing?

Then, just when we were expecting winter to be over, the “Beast from the East” came and we had the best snowfall in the South West in years. Of course, even though it was predicted, most people didn’t actually believe it until it happened. I spent a night helping to rescue people out of their cars on the A30 and then convoy them to a school in Okehampton to spend the night.

It is the first (and hopefully only) time that I have received a briefing in the men’s toilets of a service station.

During the second, smaller snow storm I was stranded in a house on the moor that I was house sitting – not too much of a hardship!

April was very much a planning month for me. I was in the process of turning the Irish 3 Peaks and the All the Tors Challenge in to a reality. This really involved spending some time looking at maps, joining dots between tors and crossing fingers.

What really made All the Tors happen was accountability. It really could have happened any year. But I told a friend about it (her response: “You can’t possibly do that, you’ll break yourself”) and applied to an adventure grant. You can do a lot based on other people’s disbelief.

In April, it turned out that I’d won the adventure grant I’d applied to: the Next Challenge Grant. This gave me £100 towards my consumables on the walk (mostly food, gas, steri tabs etc). All in exchange for a blog post about the finished adventure.

At the same time, I was running the Intrepid Adventure Grant 2018 on Crowdfunder. It was a novel idea and it almost worked – but I was running out of time to find enough entrants to reach the target. Me being me, of course I set in on an all or nothing deadline…

Against the odds, SIGG came forward to top up the rest of the grant and give 2 lucky winners £500 each towards their adventure. Amazing.

May – Tents by the Sea

Can you spot me and my tent in the picture above?

As part of this, I did some more camping in a thunderstorm and met a girl running the whole coast path in one go.

June – Messing about in Kayaks

It seems like I didn’t do much in June. I did a little bit of kayaking on the Dart – which was quite fun. When I first tried kayaking in year 9, we really didn’t get on. It was at one of these adventure weeks with school and I spent the entire time chasing my paddle down the canal…

This time was much better.

Otherwise, it was summer camping and cycling and walking. Everything that could be done in a heatwave.

Sometimes, coincidences are too big to ignore. When my family booked a holiday at the top end of the Brecon Beacons, I received an out-of-the-blue email. Team Like a Girl wanted to know if I could make a trail running weekend with them. Where? Brecon. Only a few miles down the road from where my family had booked in for the week before.

I would not describe myself as a runner. Give me a 50 mile walk over a 10 mile run any day. So I was pretty far out of my comfort zone when I arrived at a training weekend for prospective competitors in the Wadi Rum Ultra, a multistage desert race in Jordan.

But I had an incredible time. I met some great people and discovered that I loved running down steep sand dunes! Maybe there is a desert ultra somewhere in my future…

At the end of August, I headed off to Ireland for the first time. After reading about the Wild Atlantic way, I was really excited for more coastal camping and cycling by the sea.

What I forgot was we were at the end of August… not high summer. Although I’d been imagining the beautiful hot weather cycle touring we’d had travelling to Switzerland in 2016, what we got was much wetter. Plus peninsulas = headwind.

Also in August, I became an ambassador for Dartmoor National Park. Specifically for wild camping and promoting responsible use of the moor. I include this here because little Emily would be ecstatic.

September – All the Tors

Although I got back from Ireland in September, there is only one thing that I can choose to represent September this year: All the Tors Challenge. It was the hardest and most personal challenge I’ve ever done. The weather was abysmal. I got into some difficult, bordering on dangerous, situations but was able to pull through and get myself out. I will never refer to it as fun, but I am incredibly glad that I did it.

Everything about the challenge here:

My year 7 self would be proud. I was always that kid who would wait until almost the very end to give her 3 minute presentation to the class. In the hope that I might be forgotten and never actually have to do it…

I was invited to speak at the South West Outdoors Festival about my Dartmoor challenge. It made for quite a weekend. After going to the Shextreme Film Festival (as a judge in the blog category) and then to the WAEXPO, I was back down on the Devon coast. This year seems to have a distinctly coastal theme, now I think about it!

Also in October, I went to a spa with my Mum. This needs a little explanation. On day 7 of the All the Tors Challenge, I was huddled in a tent behind a wall just below Sharp Tor. All the clothing I had was soaked – except a pair of long johns, a tshirt and a pair of socks. I was lying in my damp down sleeping bag, slightly scared about how close to hypothermia I’d got myself. If it didn’t stop raining tomorrow, I would have to seriously consider abandoning the challenge.

But, unlike most of my campsites so far, I had phone signal. In a half-joke, I texted my mum saying that if I got through this we should go to a spa and get a massage. Apparently my parents thought I was delirious. A few weeks after I got back from the challenge, we went!

Last year I was passing my Summer ML in November. This year I was going to the seaside and spending time on the beach! Looks like I’m about confused about what is a suitable November activity.

The trip was a complete revelation for me. I couldn’t believe how much fun it was to grab a wetsuit and go surfing in the winter. How have I missed out on this for the 15 years I’ve been living in Devon?

Read a post about the weekend here: We Need Local Adventures

December – A Step Back to Step Forward

When I was on All the Tors, I promised myself that I would not say “Yes” to anything until January. Doing two big adventures only a week apart was a pretty bad idea. It work out fine, but it left the rest of my life in a merry little chaos. I needed time to sort it out.

As someone joked at the WAEXPO, “Say No More”.

Sometimes you do just need a consolidation period, a chance to step back and take a look at your life. It’s very easy to get so caught up in doing that you’re just hitting tasks and deadlines as they reach you, instead of looking ahead.

More on what I hope next year will bring very soon.

What were your highlights of 2018? If you do a year in review post like this, please drop it in the comments for me to read 🙂