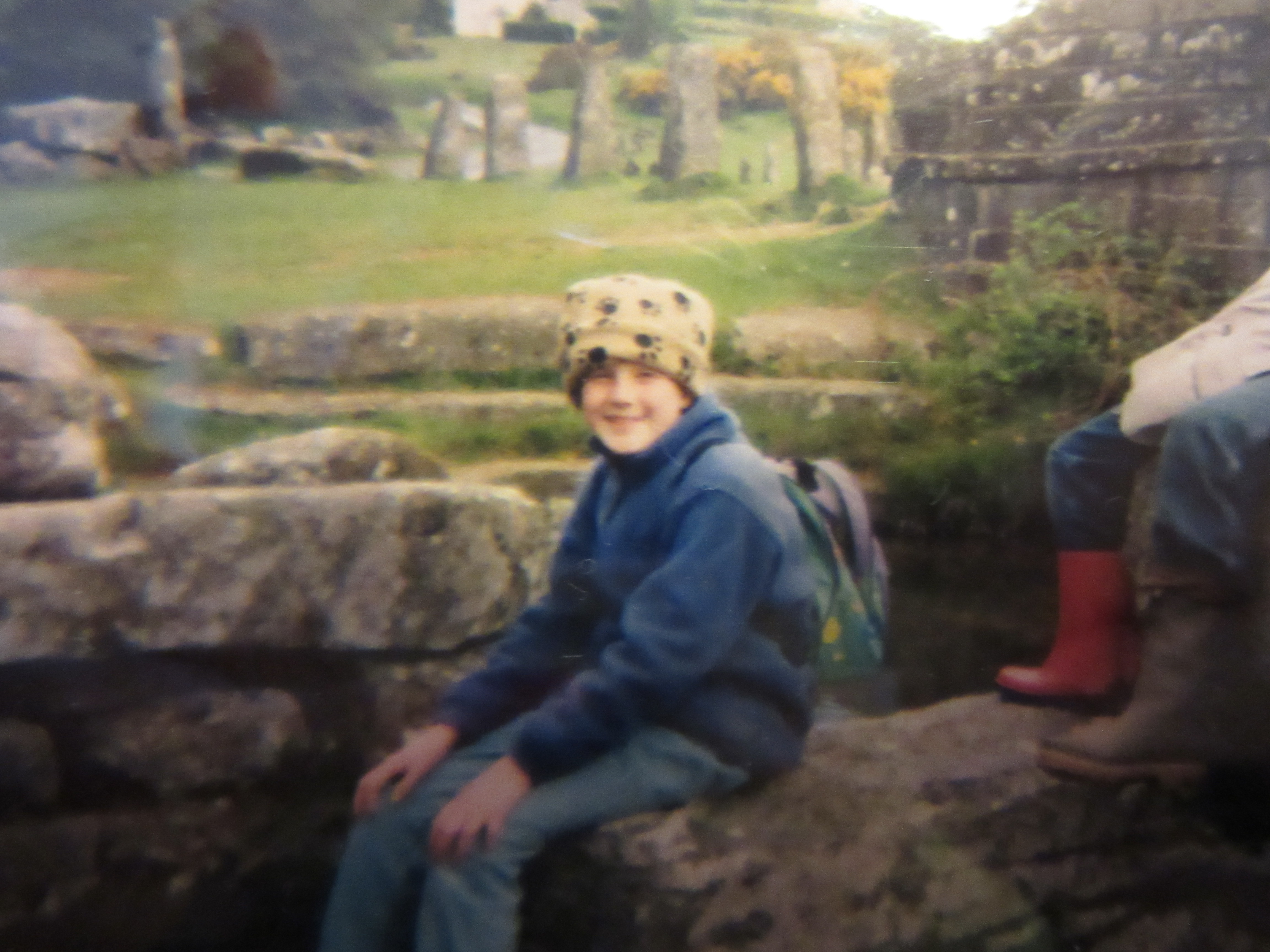 I wish I could remember my first memory of Dartmoor. I really do. Of course, I like to think that I instantly fell in love with the hills when I was first driven down the A386 from Sourton Cross.

(Though I also like to think I’m from Devon, but it’s difficult to be a Californian girl and a Devon lass at the same time – without a pang of guilt and fear of being called a grockle. P.S. I do NOT have an american accent, phew.)

Anyway, we moved to Devon from the flat, grey lands of south east when I was 9 years old. Although I can’t remember my first moment on Dartmoor, I do definitely remember finding my first letterbox. It was hidden on Down Tor and had an otter on the stamp.

My parents had two tents. One was a little blue 2-man tent that they’d used in Yosemite. The other was an even smaller orangey brown tent, made of canvas, with a metal H shaped frame. Small, but big enough to fit me and my brother in comfortably. I remember my Dad pumping up the old MSR stove and trying to keep the flimsy tin wind shield in place.

We pitched in a valley east of Sourton. I sat on a rock by the stream and gazed up at the “mountains” – in reality a fairly flat and uninspiring ridge line. But I couldn’t remember ever seeing hills that big before. I distinctly recall trying to reconcile that grass-topped ridge with the sorts of mountains I’d been reading about, and trying to imagine how much higher they’d be.

All the trips to the Lake District, Snowdonia, the Highlands, Dolomites, Alps… were all still to come. It started on Dartmoor.

Ten Tors – the start of an addiction

Before long, I was old enough to do Ten Tors. For those of you who aren’t from the South West, Ten Tors is a 2 day walking challenge for 13-19 year olds. There are distance categories of 35, 45 and 55 miles split by age and experience. Teenagers have to be completely self sufficient and carry all of their own kit to survive the weekend.

The Ten Tors event takes place in May, but teams spend half a year training for it. Whereas in other parts of the country, outdoorsy kids do the DofE expedition, in Devon those kinds of kids do Ten Tors. DofE is considered too easy (although they may do it too).

You might also like: Can Teenagers Take The Challenge? and Everything You Need to Know About Ten Tors

It’s hard to avoid hearing about this event if you live on Dartmoor. I knew very early on it was something I wanted to do, it was only a matter of when and how.

When I started doing Ten Tors, it was nowhere near as common for schools to have their own teams as it is now. My school had no Ten Tors team, no DofE group and indeed no outdoor education department. A bunch of girls in my class thought we should do something about that. We got our parents involved (or maybe the other way around – ha!) and got permission from the school to apply for a team in their name.

Unfortunately, because I had found out about what was going on marginally later than the others, there were 7 of us. It was decided that I would, therefore, be the reserve in case anyone dropped out. This was based off nothing other than bad timing, before any of us had walked on the moor together or started training.

I imagined someone would drop out. I kept at it, kept coming, but as the event approached we were still a team of 7. That meant no event for me. Luckily, one of my team mates Rosie caught a bus into school. A friend she knew off the bus was part of an independent walking group, whose Ten Tors team was missing a person. I was in luck.

When I joined the Dartmoor Plodders towards the end of my first Ten Tors season, I had no idea what an impact it would have on my life. I still haven’t left yet. The Plodders are a mixed walking group from all schools in the Plymouth/West Devon area. We are far more than just a Ten Tors team and we like to do things a bit differently.

To give you an idea, I was brought into the 35 team to replace someone who’d broken his toe. My first walk with them involved being slightly late for a TV crew, being told to hunt for a “milk tap” and being asked if I’d come to their residential dressed as Elvis.

We are a bit of an odd bunch, but we are good at what we do and like to have more fun than a clinical business-only type of Ten Tors team.

Looking back up this post, I can see it’s getting fairly long. Turns out I could write for ages about Dartmoor and Ten Tors… So I’ll try to be briefer!

The next year, I came back and did a 45 mile Ten Tors season with the Dartmoor Plodders. My first 45 team was something of 2 halves. There were 3 people who all went to the same school and spent their time talking about school. Then there were the other 3 of us who didn’t. It was fine, but I think we weren’t as strong a team because of it. We finished the event sometime around midday on the Sunday.

I should also say that my overwhelming memory of this year is the first time I had to get up at 4:30am with the Plodders. In case any current Plodders are reading this, yes I also woke up and felt sick in a daze of cold air and head torches. I forced some breakfast down and felt better. Honestly, we only give you advice from bitter experience!

Once upon a time, when Ten Tors teams still visited 10 tors and not 15 checkpoints, it was possible to get in very early. Each route was measured as the crow flies, so in reality (after taking into account bird nesting etc) some were much longer than others. Notoriously, Route T was more like 50 miles whilst Route M was more like 43.

There were also rules that meant, if you were quick enough, you could get through tor 8 at the 8pm cut off and walk through the night to tor 9. A quick few hours sleep and you were only an hour or so from the finish line.

The team a year above us in the Plodders had tried for the Ten Tors record the year before us. There is some history here. The Plodders set the Ten Tors record on the event in 2004, coming in at 8:19. It was beaten by 2 minutes in 2009 by Torbay and we wanted it back. More frustratingly, in 2009 whilst I was doing my first 45, the team a year older than us had come in at 7:59 on their first mock. They’d proved they could do it, but they were given Route T on the event.

Now it was our turn.

On a horrifically hot day in April, we half staggered half ran into Antony’s Stile at 7:56am. We’d proved we could do it. We’d had about 3 hours sleep and I had a blister under every toe of my right foot. But we had done it. Given better weather, we knew we could do it again and faster.

The fates, however, were not with us. The Plodders 45 team was given Route T for the second year running. We, entertainingly beat the Route Record for T (set by the Plodders the previous year) again by 3 minutes. I was the first girl across the line that morning, but 9:17 just wasn’t the dream.

After all that glory, 55 was just a bit of a slog. The training was fun, but the event was a bit of a drag. We were given Route Y (“That’s not a letter, it’s what you say when you see the route.”) Those extra 10 miles on your feet are no fun. Particularly when one of your team members has tendinitis and is getting blisters on his hands from using walking poles.

We finished that event feeling somewhat dissatisfied. It was almost the exact same team from the year before and, at least for me, it just lacked the shine I was hoping for. Literally too – the 55 medal was barely shiney at all, even if it was gold!

But, I was out of time. I had finished 6th Form and was heading off into the great wide North for university.