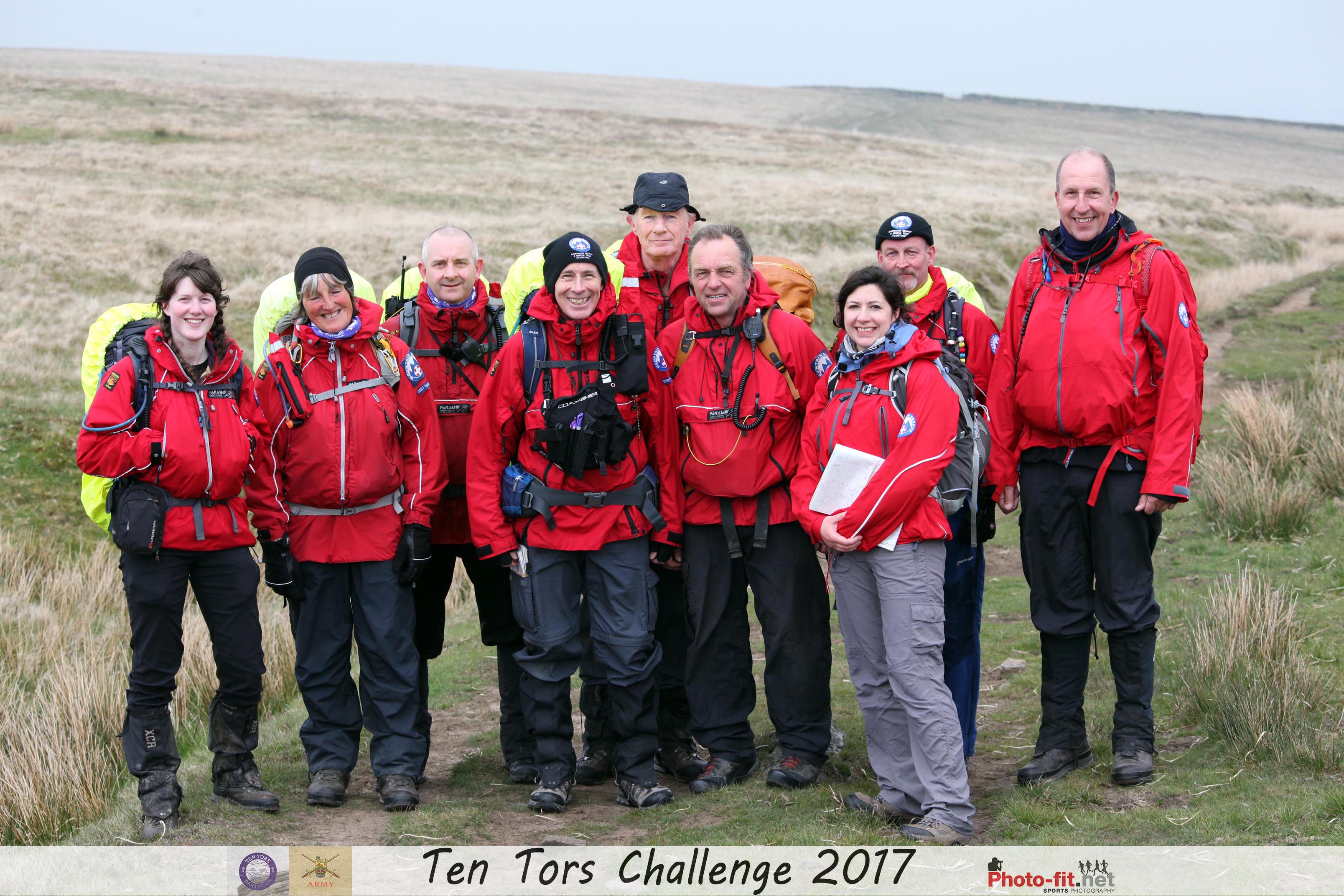 It is unusual for a 25 year old to hang out with men almost double her age. At least that’s what everyone keeps telling me. But it all makes sense if you put a red jacket on us.

Well, sort of. There are a fair few people who think it’s not normal for a young female to be part of a Mountain Rescue team. Perhaps it’s not usual, but it’s great. I’ve never felt like I’ve belonged anywhere so much before. If you know me, it certainly wouldn’t come as a surprise. A friend I’ve known most of my life told me she knew I was going to join Dartmoor Rescue (I didn’t!). Another, on seeing me just before my first Ten Tors doing rescue cover said, “You look like you were born to wear that jacket, Emm.”

Thanks Lala 🙂 I know it sounds pretty weird, but I kind of think you’re right.

Dartmoor Rescue – from the inside

Dartmoor Rescue? Mountain Rescue? DRG? DSRT? It can be pretty confusing to an outsider. Who even are we? I’ve written quite a bit about this – who Dartmoor Rescue are and what we do – but my all time favourite is this article I did for the Tavi Links. I don’t think I can say it much better, so I’ll extract some sections below.

Q: Who are Dartmoor Rescue?

Dartmoor Search and Rescue operations began in Tavistock 50 years ago (in 1968) catalysed by the death of two young army cadets on Dartmoor. (Yes, I found the link!)

Dartmoor Search and Rescue Team is a bit of a mouthful, so we abbreviate to DSRT. This proves confusing for the local press because they think the T stands for Tavistock occasionally.

“DSRT was designed to be a specialised response team, capable of dealing with Dartmoor’s unpredictable weather patterns and unforgiving terrain, using exceptional local knowledge and navigation skills. There are now four independent Dartmoor Search and Rescue teams based in Tavistock, Plymouth, Okehampton and Ashburton, covering the four compass points of the moor.

These four charities make up Dartmoor Rescue Group – an organisational body that keeps a consistency of structure and purpose between the four teams. This in turn is part of the Peninsular Mountain and Cave Rescue Association (PenMaCRA) and above that, Mountain Rescue England and Wales.”

This is why all our jackets say “Mountain Rescue” on them. They are bought centrally and so teams across the country wear almost the same uniform.

“Do we have any mountains on Dartmoor? – a handful – but the general reputation for flatness often leads to a misjudgement of difficulty and conditions.”

Interjection: I was interested to see in my recent trip to Ireland that many of their hills, at less than 600m elevation, are referred to as the Something Mountains.

“It may ‘just’ be Dartmoor, but the weather can turn from sunny to foul without any notice at all. Walkers can leave home in the sunshine only to experience rain, fog, hail and sunshine again – possibly before they even reach the car park. Very often it’s the people who were caught out by a sudden drop in the cloud level, and then darkness, who find themselves stranded – or the people who didn’t realise the unassuming stretch of ground in front of them could be knee-deep bog.”

I have had to defend the existence of a Mountain Rescue team on Dartmoor to friends, particularly those in the “proper” mountains up north. Accidents don’t occur just because the hills are higher, it’s to do with remoteness.

At the time of writing, we have almost 50 team members in Dartmoor Search and Rescue Tavistock – appropriate for the 50th year! These include trainees who haven’t yet got/earnt their jackets. I’m surprised how many people think we operate like the Fire Service. We certainly don’t get paid! We also don’t sit in Landrovers on the moor waiting for people to trip over…!

“We are on call all day, every day, ready to respond whenever the message comes – be it at 1:00am on a work night, sitting down to dinner or during children’s birthday parties. People really do drop everything to respond. You never know when a call out is coming and you never know how long it will take. Call outs can last from minutes to days, depending on the incident. The air ambulance might have reached the casualty as we are deployed, or we might be out for 8 hours and eventually replaced by another team on a prolonged search.”

It’s understandable why people think we’re a paid emergency service. We do a lot of work alongside other blue light teams and are called out through the Police. It seems that the other emergency services are becoming more and more aware of our capabilities.

“Although we are volunteers, we work alongside the other emergency service personnel and train to a professional standard. Our training covers first aid, navigation, technical ropework and search techniques. Most of our deployments fall into one of these areas and all team members are required to be competent in these basic skills. On top of this, there are specialist courses in water rescue, 4×4 driving and search management – to name a few. Team members can also train a search dog as part of SARDA (Search and Rescue Dogs Association).”

Q: Have you been on any gnarly call outs?

I get asked this question quite a lot… Please, tell me some juicy story about some people you saved.

Yes I have been on some “gnarly” call outs, in the sense that the stakes were higher. But I’m not going to tell you about them in detail. You have to remember that’s a real person your talking about. It doesn’t seem right and I don’t know what it’s ok to say, so I’d rather not give you any details that can be linked to individuals at all.

That aside, I’ve also been on lots of quickly resolved call outs for people who were lost or with minor injuries. I’ve been on a fair few that have been stood down before we got there and others where the people we’re looking for are subsequently contacted already back home.

“Call outs on Dartmoor include many of the situations you’d expect; people can be lost and caught out in the dark, injured and in need of swift transport to hospital or mentally ill. However, we also take part in rural off-moor searching and are occasionally called out of area to assist other Mountain Rescue teams in Cornwall, North Devon or once even as far as York in the 2015 flooding.”

Short answer, yes. The phrase “like having a second full time job” is used often. The time commitment is one of the biggest reasons we lose trainees in the early stages. We try hard to explain it, but you kind of have to experience it to really understand!

“When I started out as a trainee, I had no idea how much of my life Dartmoor Rescue would take up. It sounds ridiculous to say, but there is so much more to it than being on call all day every day. We train at least once every week, plus specialist courses, optional training, meetings… and fundraising and community events on top of that! It can easily become a second, unpaid, full time job.”

At the moment, I’ve been in the team for almost 3 years. I’ve been the Treasurer for 2 of those years. I help out with extra nav training for the trainees as often as I can. I make a point of showing up to fundraising events (because if we have no money coming in, we can’t keep running).

“There are weeks when I can end up in a red jacket, or on team related business, every single day. We call it ‘one of those weeks’, but if we didn’t enjoy it, we’d never put in that much time and effort. There is, as far as I have found, nothing more satisfying or rewarding than helping people in need and, even just occasionally, saving lives in the process.”

Why are you walking all the tors on Dartmoor?

Now we’re almost at the end of the story and today, 15th September 2018, I’m starting on the biggest walk of my life. It’s taken several thousand words to explain my full motivation, but beyond all this I’m trying to do a good thing for a team I love. A team that helps other people and saves lives.

Dartmoor is, fundamentally, wet. Anyone who’s been near it knows that. Currently, the most waterproof jacket a team member is given is a Paramo smock. Many of these have been worn for years and are reaching end of life. The team are hoping to raise enough money to buy a new GoreTeX waterproof jacket for each team member.

If you’d like to help a Dartmoor Rescue member stay dry on call outs, please donate to my Just Giving page: www.justgiving.com/all-the-tors-challenge

Thank you very much for anything you can give.

Wish me luck on the moor!