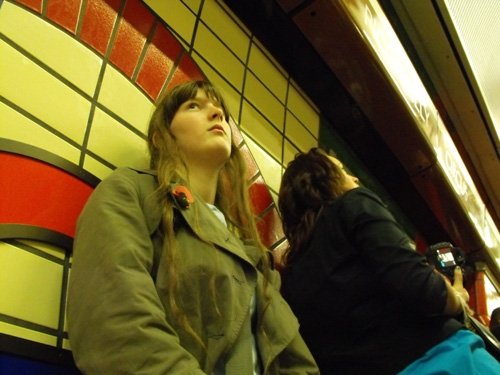 The story of me and writing is not something I tell many people about. It’s been a secret from basically everyone, for a very long time. Now my first book is on kickstarter, it seems like an appropriate time to come clean with you all. This is not an idle fancy that has happened overnight. Writing stories is something that has been in the background of my life for sixteen years… Yet even many of my close friends know nothing about it.

So sit tight, grab a cuppa and let’s talk about me and writing. Although, be gentle. As Yeats writes,

“I have spread my dreams under your feet. Tread softly, for you tread on my dreams.”

Where it all began

One morning, I woke up and knew I was going to be a writer. I mean that quite literally. It must have been the summer half term, or maybe even Easter of my first year at secondary school. I wish I’d had the presence of mind to write down the date. I have a feeling I did, but I haven’t found a conclusive date yet… Detective work aside, I was probably 11 years old.

I’ve been able to remember my dreams all my life. On that morning, I woke up from a vivid and adventurous dream. Not uncommon, right? But this one was different: it was good. I wanted to know what happened next and I knew it was a long story. It was a book. I’d just lived through the third chapter. I needed to write it down.

And so there I was, holding this thing in my mind. I had no idea what to do with it – I wasn’t a writer – but I wrote it down. It came to about half a page and I’m fairly certain I have that page still somewhere. Then I took another page and started imagining the rest of it. That is where it all began.

By the time I was 14, I had written a novel and a half and was pitching literary agents. By 15, I had one. I will never forget walking into their office in Covent Garden and the lady in reception saying, “Oh we’re all big fans of Emily’s work here.” I could not believe it. I’d read all the books about the publishing process, about vanity publishers and being taken for a ride. I had a stack of rejections letters. But this wasn’t vanity publishing or some scam. This was the real deal.

Unfortunately, the financial crash of 2008 was even more of the real deal. I was writing children’s fiction and the entire children’s department of the literary agency was closed. Everyone lost their jobs. They say ‘Sweet 16’ but it was pretty much a year of disaster for me. Still, I got good GCSEs and went on to take A Levels: Physics, Chemistry, Maths, Further Maths… and English Literature.

Alongside school, I did the only thing I knew how to: I wrote more stories. By the end of Sixth Form I’d written three novels getting progressively better in style and form.

Next: a Maths Degree, of course

It’s funny what ideas and opinions you sort of absorb, take for fact. Despite spending the best part of my spare time outdoors or writing, I went to university to study Maths. There were three main reasons. First of all, I didn’t understand what they could actually teach me studying English for £3k a year. It seemed more like guided exploration with essays than transmission of facts, tools and techniques. Secondly, I thought you couldn’t get a job with an Arts degree. It’s ironic, since I didn’t go to university for job prospsects. And finally, I chose maths because I love prime numbers and beautifully simple, ancient, unsolved problems. For example, “Can every even integer greater than 2 can be expressed as the sum of two primes?” That question has been around for hundreds of years. Seems plausible. Never been proven.

Anyway, I basically disregarded studying anything to do with writing. I went and studied Maths. On the train up to my first term of university, I was editing the first draft of my third novel. It all seems so ironic looking back on it, but it took me years to realise I was meant to be writing seriously. While at university, I took on all sorts of extra curricular things. When I wasn’t running round the moutains or volunteering, I was working for the student newspaper.

But there was just too much going on and too many numbers for me to write properly. The stories were put to one side, at the back of my mind or the bottom of the drawer. Honestly, I found the “definition, lemma, proof” style of teaching mathematics stifling and difficult to progress with. To get ontop of the degree I almost completely stopped writing, except very occasional flashes of inspiration at midnight.

When finally survived university, got the First I’d been flogging myself for, I came home broken. I was sick of numbers and disillusioned with the career path I was supposed to be taking. Luckily there was Dartmoor and a home for me to come back and hide in. I still find it hard to write about this time. About university and being spat out the other side. All I can say is that I was lost. Very lost. If you’re reading this and you’re in that place, you can get out of it. You can. It will be slow and you’ll rarely feel like you know what you’re doing, but you’ll get there. Keep trying.

During this time, I started a blog. This blog. To start with my writing was pretty awful. I’d forgotten how to get the words out right. But I kept writing and I kept pressing publish on the blog posts. No one was reading it anyway, so it didn’t really matter. I was lost and, time and again, I find myself again through writing. So I wrote.

Let me also say that I didn’t sit down and think: “right, I need to sort myself out and get back into writing, I’ll start a blog.” It just felt like the right thing to do at the time, so I tried it. And well, five years and over 200 posts later, I’m still here.

The blogging focussed itself on adventure. I just wrote about what interested me and that’s where we ended up. From there I got into guest posting, writing articles for publications and so on. I even started a magazine, but that’s a whole nother story. My job had nothing to do with writing – I had a maths degree after all. But I slowly started to morph my job to include more of the written word: marketing, SEO, content… Until I landed on a full time job as a writer. Bingo.

But there was something missing: books. There is nothing quite like getting your teeth stuck into a book. You get to know the characters, take them on an adventure and discover things along the way. I love it. So, I started tentatively approaching publishers again. The world had changed a lot since 2008. Self publishing had become a very acceptable way to publish a book. Publishers were more concerned about the author’s social media following than whether they had an agent.

In 2018 I had a fling with a publisher that ended without a contract. Close, but no cigar. That was a fairly enormous year for me (although not as big as 2019) and I realised that I needed to cut the noise and focus on what was most important to me. Publishing a book has been on the top of my “things to do in my life” list that I simply couldn’t ignore it. It was time to take it seriously.

There are no rules

At the start of 2020, I decided it was time to stop waiting for permission. That is, after all, essentially what I was doing by trying to find agents and publishers. Sure it’s nice to have external validation, but actually I didn’t really need it. I knew how to publish things in print thanks to the magazine I was running. I knew how to write books thanks to 16 years of practice. Plus working as a writer for my day job had taken away the mistique of “being in the mood” for writing. You simply can’t wait for lightening strikes if you’re doing two articles a week, every week.

The list of books I wanted to write was getting longer and I was getting older. In fact, the 2007 Writer’s and Artists Yearbook is still on my bookshelf in all it’s red and gold glory. It’s a horrific reminder of just how long I’ve been playing this game. Playing with no results.

This July, I turn 27. This is, according to 12 year old Emily who assumed she’d be published within a couple of years, far too old to publish your first book. Positively ancient. Fifteen year old Emily is astounded. Sixteen year old Emily wonders what got in the way for it to be a decade on and still no published book. I have all these past Emilys in my head. They shout indignantly at me from the past and keep me in line. Whatever excuse I gave them sounded hollow. There was no excuse any more. It was time to publish a book – and quickly, before my 27th birthday.

The only thing we could agree on was that Chinese proverb: “The best time to plant a tree was 20 years ago. The second best time is now.”

Want to help make this story have a happy ending? I’d be very grateful if you could have a look at my Kickstarter. Maybe even purchase a copy of my book – because you can never have too many books in your life! Or at least I can’t…

The book is a story of my All the Tors Challenge in 2018. It’s not a dry factual sort of book. It’s a personal account of the physical and emotional story of what happened during that 300km walk. If you’ve been around a while, you’ll know that walk was the culmination of years of experiences tying me – and untying me – to Dartmoor.

This book is the first. And I mean that. The long list in the back of my diary is going to make its way into print over the next few years. That is a promise. Watch this space 🙂

To pre-order a copy of my book All the Tors (or grab other rewards like me taking you wild camping) pledge on Kickstarter now: http://kck.st/3dwGg1z