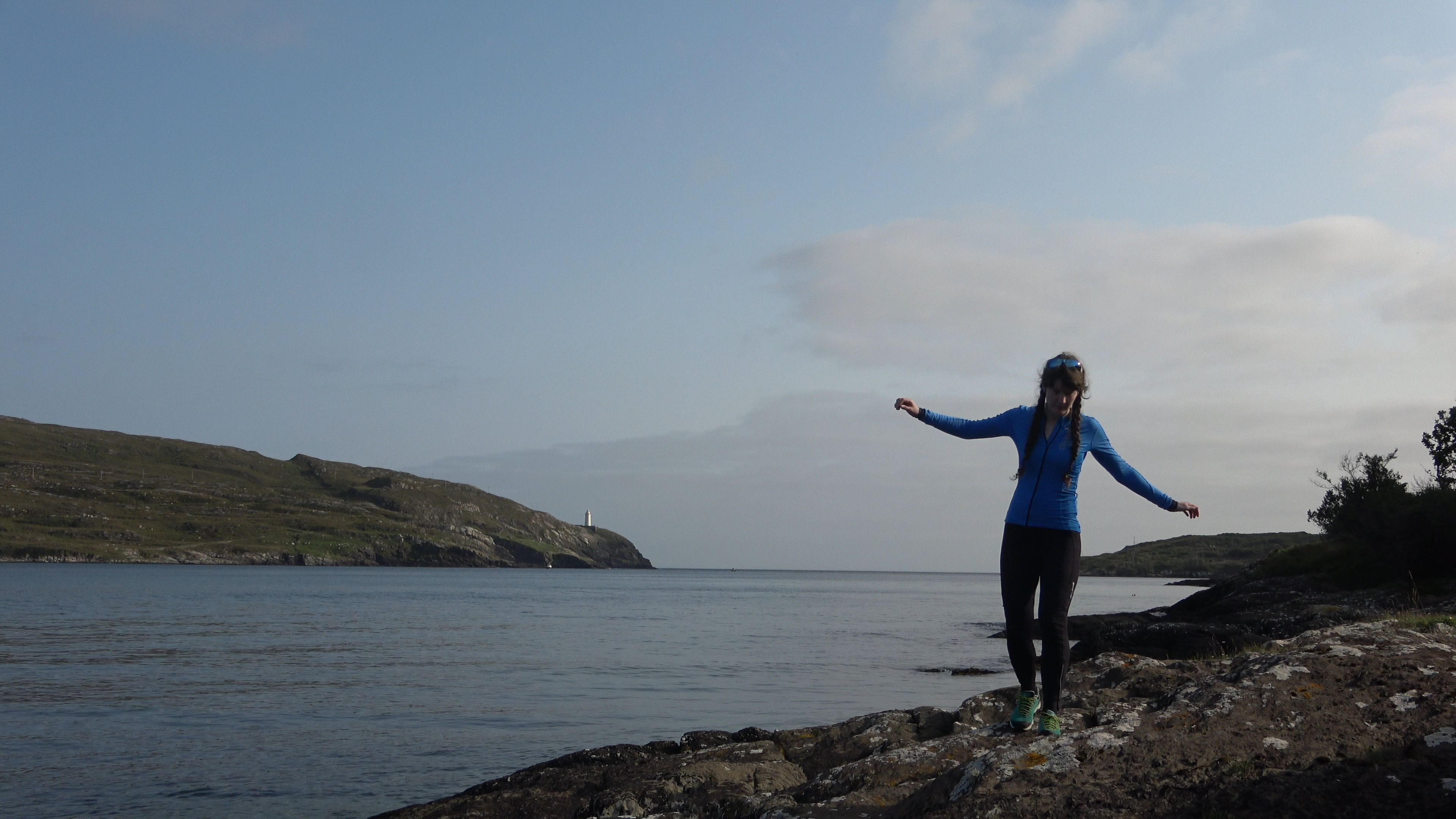 This blog post was written whilst I was on the way back from Ireland at the beginning of September. I was optimistically going to schedule it for whilst I was gallivanting around Dartmoor. Funnily enough, only having a 5 day turn around between Ireland and Dartmoor, it didn’t happen…

We’re almost at the end of the Irish 3 Peaks Challenge. I’m on the boat back from Cork to Roscoff – an 11 deck monster with 3 restaurants, 2 bars, 2 cinemas and a swimming pool (sadly bereft of water).

I’m sitting around in the t-shirt and shorts that I’ve been wearing as pyjamas for the past 2 weeks. Fed up of wet shoes and dirty socks, I’ve been stumbling around in flipflops – an interesting experience as the ship rolls on the sea… But not as interesting as having a shower!

The 2 weeks we’ve spent in Ireland have gone quickly. I’m already thinking about my next adventure – which I’ll be on by the time you read this! Crazy! A very different sort of adventure.

In Ireland our route was chosen mostly by what we fancied on the day. We started with only the rough idea of cycling some of the western peninsulas on the way to Macallagiddy’s Reeks and the highest 3 peaks in southern Ireland.

Here is my best attempt at the route we did, drawn on Google Maps.

We started in Cork, straight off the ferry, then turned left and went along the Wild Atlantic Way, keeping very close to the coast. Stayed the night in Rosscarberry, then went out along one of the mini peninsulas, skipping out Sheep’s Head. Up to Bantry, then turning left again to go completely around the Bera Peninsula. From Kenmare we went up towards Kilarney, through Moll’s Gap and the Gap of Dunloe. Stunning and not too difficult.

We had a couple of nights based in Kilarney to go walking. We then cycled up to Tralee (nowhere near as directly as marked on the map here) then west into Dingle Peninsula. We cut across and down to Dingle over Connor’s Pass. Then we spent most of a day climbing Brandon Mountain.

Back to Dingle, our route then took us round the whole of the Ring of Kerry, with Valencia Island thrown in for good measure. Then we made a pilgrimage back down to the Bera to climb Hungry Hill because it had looked so good when we cycled past it before. That ticked off, we cycled over towards Blarney and then back to Cork for a ferry.

There are some things you should know about cycling in Ireland. For starters, they have no cycling infrastructure. If you’re used to Holland or Germany or even the UK, you’ll be surprised. There are no off-road cycling paths in the area that we were cycling.

There is, however, a yellow dashed hard shoulder with makes quite a nice bike lane – particularly on faster roads. That is if they’ve remembered to cut the verge back enough that you can ride in it. We should also give the road surface a mention. It is described affectionately by the Irish as “lumpy”. You might rephrase this as “no potholes but persistently bumpy”. You are constantly aware of the road surface in most places…

But wait, I hear you cry! What about this famous Wild Atlantic Way that everyone’s cycling? It is not a cycling route. It is a driving route, designed for cars, that people are starting to cycle. That means it’s very easy to follow, but does not take the Sustrans approach of moving you off busy highways or avoiding hills. I would not recommend it for anyone uncomfortable with riding alongside fast traffic.

The walking in Ireland was great. It felt like North Wales but greener – a cross between Snowdonia and the Lakes. It wasn’t as overwhelmingly black/grey as Snowdonia, but still just as pointy. It was green and friendly like the Lakes, but without all the cairns and sign posts. Unfortunately, our summit views were pretty much the same as them too.

Honestly, it felt like we were exploring in an area that was barely walked on. That may have been to do with our choice of routes, but the sheep tracks and cliff edges were refreshingly wild and empty. The scrambling was great. We could only find 1:50k OS maps for walking. You can get a better scale Harveys for the Reeks if you can bear 1:30k scale. There are also maps for Kilarney National Park, but the highest peaks aren’t in the national park… (Go figure?!)

The 1:50ks worked find (caveat, we both have ML) although it was often difficult to tell how to get access to the hills from the road. Luckily local people were very helpful with that bit! You can’t beat local knowledge. There are also some good suggestions from Kerry Mountain Rescue Team if you want to go up Carrauntoohil.

We actually ended up doing more than the 3 peaks we’d originally planned.

Like all good stories, we experienced some drama along the way. I’d say not everything went to plan, but to be honest we barely had a plan…

Yes, I know. Cycling on the west coast of Ireland in September. What exactly were you expecting Emily? Well, stupidly, I was not expecting so much rain and wind. It rained almost every day we were in Ireland. Some days it was awful, some days it only lasted for minutes.

Cycling in the rain gets a bit tiresome, but the biggest problem is that you can’t dry your clothes. I spent almost all of my cycling time in the same set of clothes. It was too cold for shorts and short sleeves most of the time.

Not to mention that I completely forgot about headwinds. Dear aspirant coastal cyclist, if you intend to go around the whole of a peninsula you will spend half of the time with a brutal headwind. Yours sincerely, Emily.

I really like the attitude in Ireland towards wild camping. Even at the tourist information centers, they don’t say “Wild Camping is illegal”. Instead they talk about the paid for campsites and then say, “Or of course, you could camp wild. Just ask the land owner for permission”. Why can’t we be more like this in the UK?!

That said, we probably spent most of our nights in proper campsites. Particularly around the coast, there wasn’t a lot of choice – you got the full on holiday park, or nothing. I liked the fact that most places had a kitchen (or just somewhere indoors we could shelter from the rain to eat).

What I hated was that showers almost always cost extra. Is it just me or does it hurt more to pay extra for the shower separately, than a slightly more expensive campsite? I basically didn’t wash.

But eventually it got so bad with my hair – I do have over a meter of it – that I just had to wash it. There was no way I was going to pay for 20 min of shower when 4 minutes cost 1 Euro! Would not recommend 🙁

It was wonderful having a shower on the ferry, finally. Even if the shower cubical rocked around… Anyway, next up, pub quiz! I think I could get used to long haul ferry journeys!

Climb Ireland’s Carrauntoohil – A Guide to our Route

Revisiting the Reeks District of Ireland