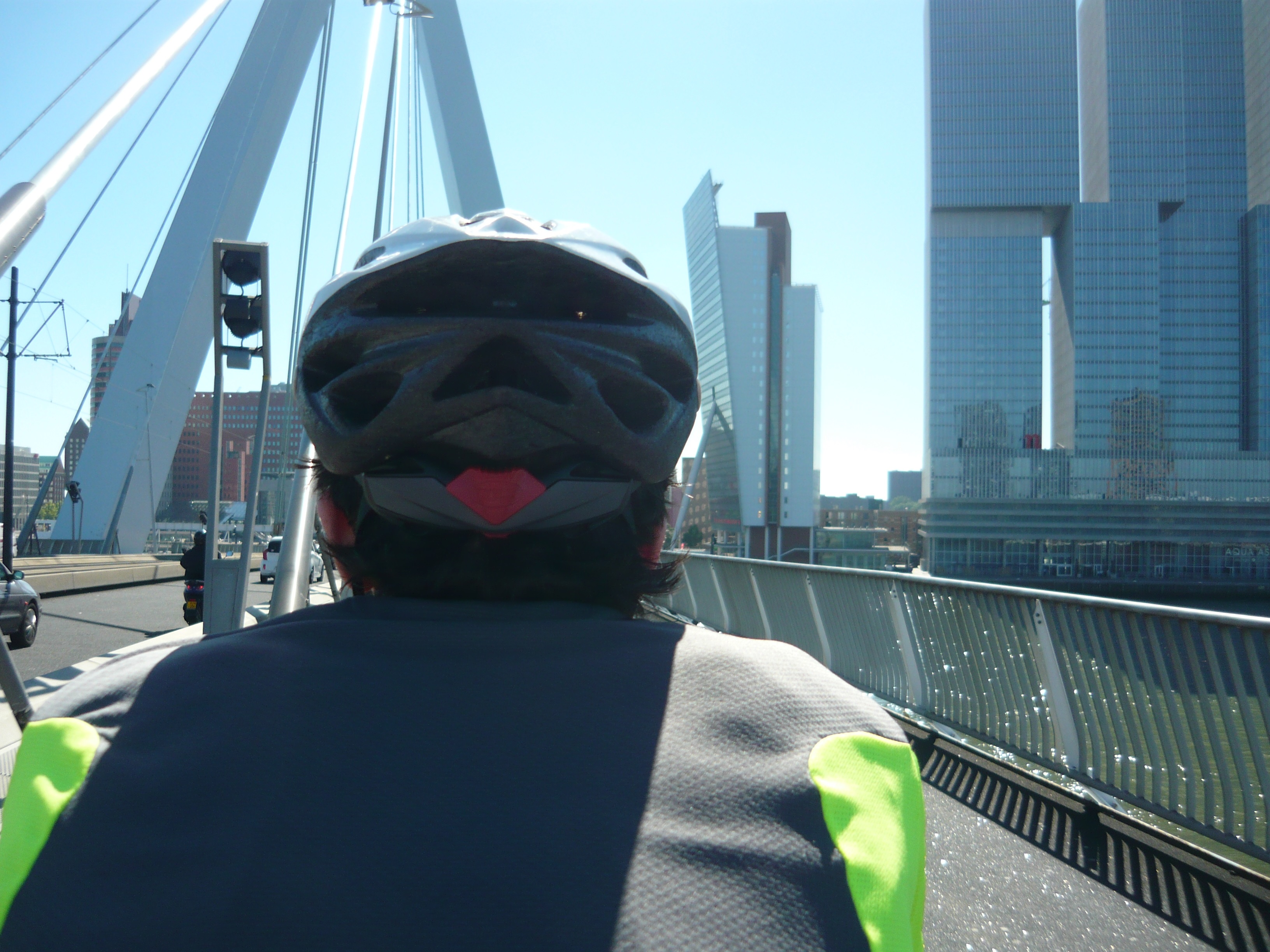 Rotterdam. The city has no semblance of cheese. Except perhaps the sticky mess a cyclist might get into, trying to locate, pick up and then extract themself from a hot cheese…

It was 27 degrees C and we’d spent most of the morning trying to find the way into Rotterdam. We were, I’m pretty sure, cycling in circles. The network maps threw up numbers that didn’t appear on signs – or appearing on ones pointing in the wrong direction.

At each unhelpful waypoint we’d have to stop and re-assess. It was slow going.

At one point, we met an English man who’d hired a local guide to cycle with, a personal satnav that makes interesting conversation instead of telling you to turn left into the field. Although when he saw us reading the sign he did insist on helping us and insistently point us in completely the wrong direction. I may have been navigationally confused, but not THAT confused. We politely waited for them to leave before ignoring their advice.

Inspite of all the odds, we reached sign 10 at the edge of Rotterdam, where the flat rural landscape was bulldozed across with skyscrapers and traffic jams.

I knew where we were and we were where the map said we should be. Excellent. Now we just had to follow an international cycle route – LF 11 – for the rest of the day. Easy.

Of course, no sooner had we crossed the road, we were sucked into a tangle of roads and a confusing urban sprawl. The green LF signs were mixed up with local routes and at the point we reached a multi-lane roundabout, Joe bailed us onto the pavement. We had no idea how the give ways worked, never mind which lane we should be in!

We pushed the tandem along the pavement a little until we came across another sign. Unfortunately it had been knocked at an angle – the sort where you’re not quite sure which direction it originally came from. I looked from map to sign, sign to map.

A man cycled past. Everyone in this country seems to have a bike. We must have been the only people in cycling jerseys – here a bicycle was just a method of travel, not a sport. You just used it to get from A to B which, I guess, is what we were doing in a long sort of way.

We kept looking at the map and eventually the man cycled back.

It’s hard to have a conversation about a map in English, never mind when you don’t have a common first language. Either way, it was good of him to help and, although he was wrong about where we were on the map, he was right that we needed to turn left for the centre of Rotterdam. Thank you kind stranger.

We found the river, which we were supposed to be cycling alongside, and were back on the LF route. Hooray!

Until we were immediately confronted with a dug up road with barricades and a cycle diversion.

Thanks guys, just thanks.