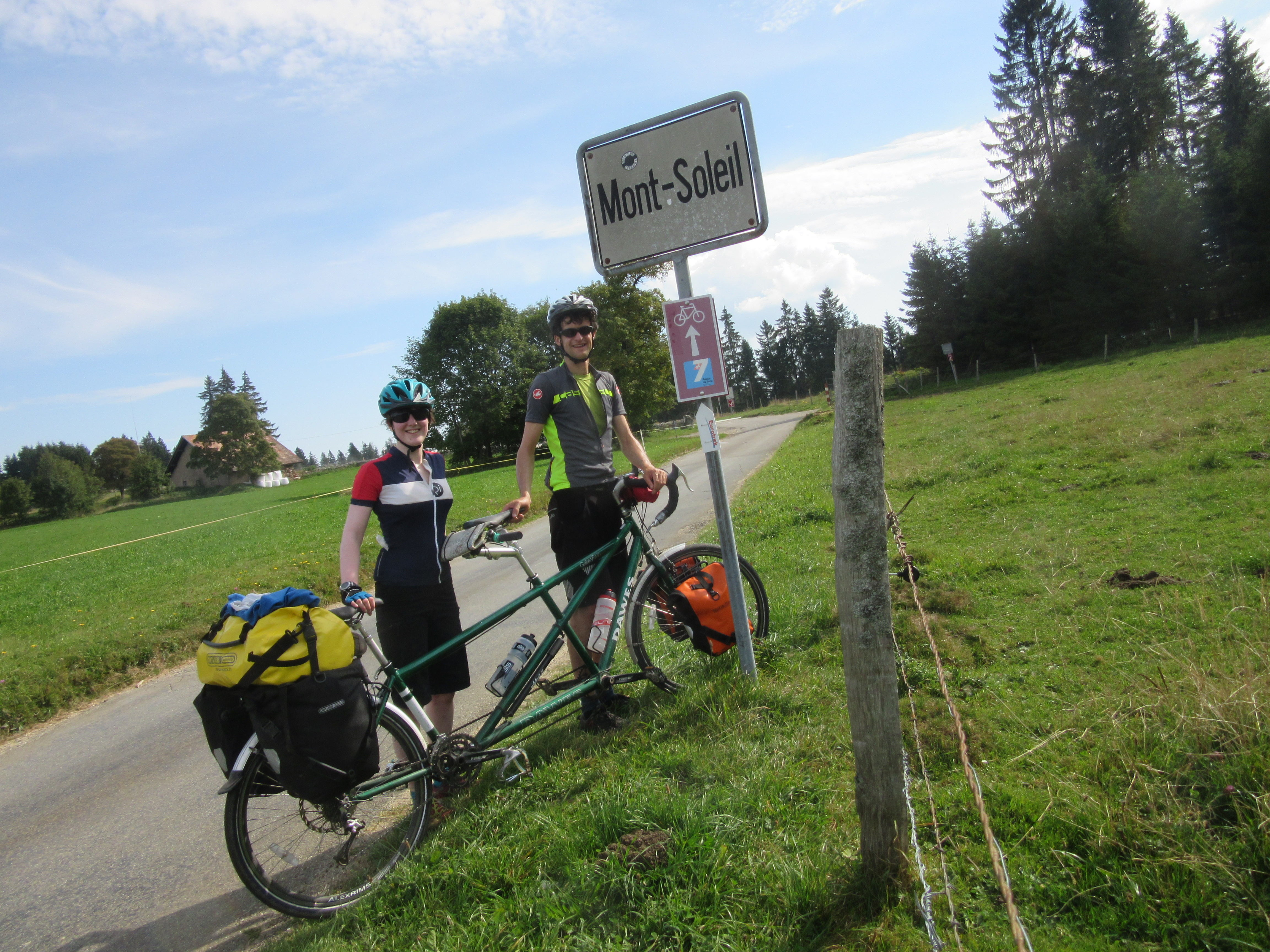 In 2016 I went on a huge cycling adventure. But I’d barely started this blog at the time, so you didn’t really get to see me do it. What I did post and more information about the trip can be found here: Cycling from Cambridge to Plymouth via Switzerland on a Tandem

But, that doesn’t really answer the many questions people have about the trip and what happened. So… here’s a FAQ to answer everything you can think of about the trip. And if you have more questions, please just ask. Always happy to answer!

This was a combination of practical and creativity. Basically we’d decided on western Europe as a good place to start. Then I’m not really sure exactly how it happened any more. There was some route dragging on Google Maps and of course, we were restricted by the ferries. It’s incredibly hard to get a tandem anywhere on public transport, particularly aeroplanes. But ferries are no problem.

Eventually, I think we had a rough distance and idea of going from Holland to France via Switzerland. That’s when I decided I’d like to go through as many countries as possible. The route was adapted accordingly.

Finally, the detailed route of getting from campsite to campsite was made up the day before. We were buying maps one country ahead, as we reached the border. This gradually changed from cycling maps in Holland to a road atlas in France… Occasionally, we had to navigate by sign posts, paper tourist maps and – when all else failed – by the direction of the sun.

Are you really rich?

Nope. In fact at the time I was feeling pretty poor. I’d fairly recently finished university with about £30,000 of debt. I’d just quit my first post-uni job to go on the trip. It’s worth noting that I didn’t have to quit the job to do it. I’d already negotiated the time off, but it turns out that working in telesales isn’t really for me…

Despite having barely any savings, the trip only cost about £600 each for 50 days. That’s including all food, accommodation, ferry crossings – everything. It’s not including the cost of kit.

Did you take any luxuries?

Yes (sort of!). I took a pair of hair scissors to cut my fringe with. It seemed pretty frivolous at the time, but I really wanted to be able to see after 50 days! Plus I didn’t fancy cutting my hair with penknife scissors.

I think Joe might also argue that my luxuries included accumulating paper during the trip. That included leaflets, tickets, receipts, wrappers… After 50 days it was quite a stack.

What kit did you take?

There is a complete list of all the kit I took on the bike tour here: The Complete Bicycle Touring Gear List

Nope. Or at least, no more dangerous than normal life. We weren’t deliberately putting ourselves in dangerous places either.

How many languages did you learn?

Zero! Although I did have my first proper French conversation with a French person. French was compulsory at my school up to GCSE, but we used to spend most of our time sitting at the back of the class playing cards and sniffing sherbet… (Sorry Mrs Cooper.)

This has left me in an odd place of being able to understand what someone says in French, but unable to construct a sentence in response. By the end of the trip I’d managed a paragraph.

You do also pick up words and phrases as you go. Enough German to order bread. Enough Dutch to be polite. That sort of thing.

Were there border problems?

No issues with any borders. We were in the EU for most of it, so there isn’t really a border at all. We simply cycled through the Swiss border on the pavement (into Bern) and no one even noticed. On other occasions we’d pass in and out of Switzerland on the French border, but there was no one there to man the posts.

If anything, we’d only realise we were in another country because all of a sudden everyone was speaking a different language.

Did you get attacked by animals?

Not that I can remember. We got chased by enthusiastic dogs a couple of times, but a fair bit of shouting sent them home again. Otherwise, our pastries got attacked by tiny red ants once – but that’s another story! Oh and I’m pretty sure my shorts were attacked by a horse right at the start of the trip.

Did you get robbed?

No, never. If anything people gave us things for free, rather than took them away. It was an odd experience leaving the bike with our worldly belongings locked up outside the first grocery shop. Anyone could have just taken a pannier. But, they didn’t – and never did. We always made a point of taking important valuables with us though.

Actually all the cities were awful. Trying to cycle in a city is a nightmare to start with. Then add not being able to read the signs, not really knowing where you are going and the turning circle of a tandem. That leaves you with a fairly unpleasant experience.

It you’d like a real answer, I’d have to say Luxembourg City. By this stage we’d learnt to park the bike outside the city and walk in. It’s a pretty cool place, with interesting underground caves and cliff-top views. It’s also the only city I’ve seen that’s open minded enough to make a nice-looking skatepark in the centre of town.

Recommendations for people trying a tandem?

Talk to eachother. It is impossible to ride without communication. Make sure the person at the back isn’t a control freak (you get almost no control) and has a thick skin to abuse (you get lots of it).

Difficult one… Probably Switzerland, but maybe the Netherlands. Switzerland because the cycling was excellent, well signed and pleasantly varied. The Netherlands because it felt like a bit of a home coming. One side of my family has Dutch roots.

Biscuits! In particular, there’s a special European biscuit that is two digestives with chocolate filling inbetween. So kind of like an Oreo but plainer and with a chocolate middle. They are pretty much synonymous with “biscuit” in France. Occasionally we found something sold as an “English Biscuit” that was actually just the same as described…

Actually you can also buy bags of broken biscuits in Switzerland and they were great! Got me up several triple chevrons!

Did you keep in contact with friends and family?

Not really. We had a tracker and it didn’t work very well. It was based off phone signal and it stopped working somewhere in Holland. Unfortunately we didn’t realise. It kept behaving like everything was going fine. My SIM card was inside the tracker, so I was without a phone for the whole 50 days. I sent the occasional text to my parents via Joe’s phone, but not often. This was a real form of escape for me.

We did of course also send postcards/letters home. Plus we were posting maps of the countries we’d already been through back home.

How did you get sponsorship?

There was no sponsorship for this journey. The entire thing was self funded but – as I said before – it wasn’t a very expensive trip. If I’d had an audience back then, maybe I could have got some sponsorship. But I’d barely started this blog at the time. Plus sometimes it’s fun to just go.

Related Posts: The Easiest Way to Fund an Adventure

How did you document the journey?

Several ways really. I didn’t have a video camera at the time, so I took just a standard compact camera. Alongside this I kept a daily diary. Towards the end I got fairly fed up with the writing – it just took so long. Of course, I’m very glad I did it, but at the time it started to feel like a chore. The last thing I wanted to do at the end of the day in the tent was go over the whole day again.

If you’re thinking of making a travel journal, I’d really recommend recording the specifics. You’ll probably remember the overarching things that happened that day. What you won’t remember is what you felt at the time, or exactly what people said to you.

What will you do next?

Incorrect question. I did this trip in 2016 and since then I’ve done lots of other adventures (big and small). I’d dearly love to do another adventure this big, but I don’t think it’ll be happening for another year or so yet. There’s just too much else going on in my life that I want to prioritise.

Are you still talking to each other?

Post-trip we were definitely still talking to each other.

Did your bike break?

Not significantly. At the start the brake pads were mysteriously rubbing – until Joe realised he’d fitted them backwards. Then much later in Germany we discovered a split in the tyre. Luckily they have bike shops in Germany so we simply went and got a new one. No drama.

Did you run out of food or water?

Almost. At the start of the trip, we forgot about shops closing completely on Sundays. So we spent our first night in Belgium with only a pear in our food store. Then much later in the trip, we started having problems with campsites shutting for the season. Most notably, the Four Season Campsite in Roscoff that is shut from September through to Spring…

This left us with a problem. We had nowhere to stay. After spending some time in the Tourist Information, getting assurances of which campsites were open along the coast, we headed off. Unfortunately, the campsite we were headed for was open, but closed to tents. Go figure.

Since we only had 2 litres of water carrying capacity between us, we had to use most of it cooking our dinner. We camped on the beach (frustrating that you can’t use all that water in the sea!) and tried to drink the water drained from the pasta we were that desperate. Tip: don’t.

There are several contenders. Either:

Is the world a bad place?

Not the bit that I cycle through.