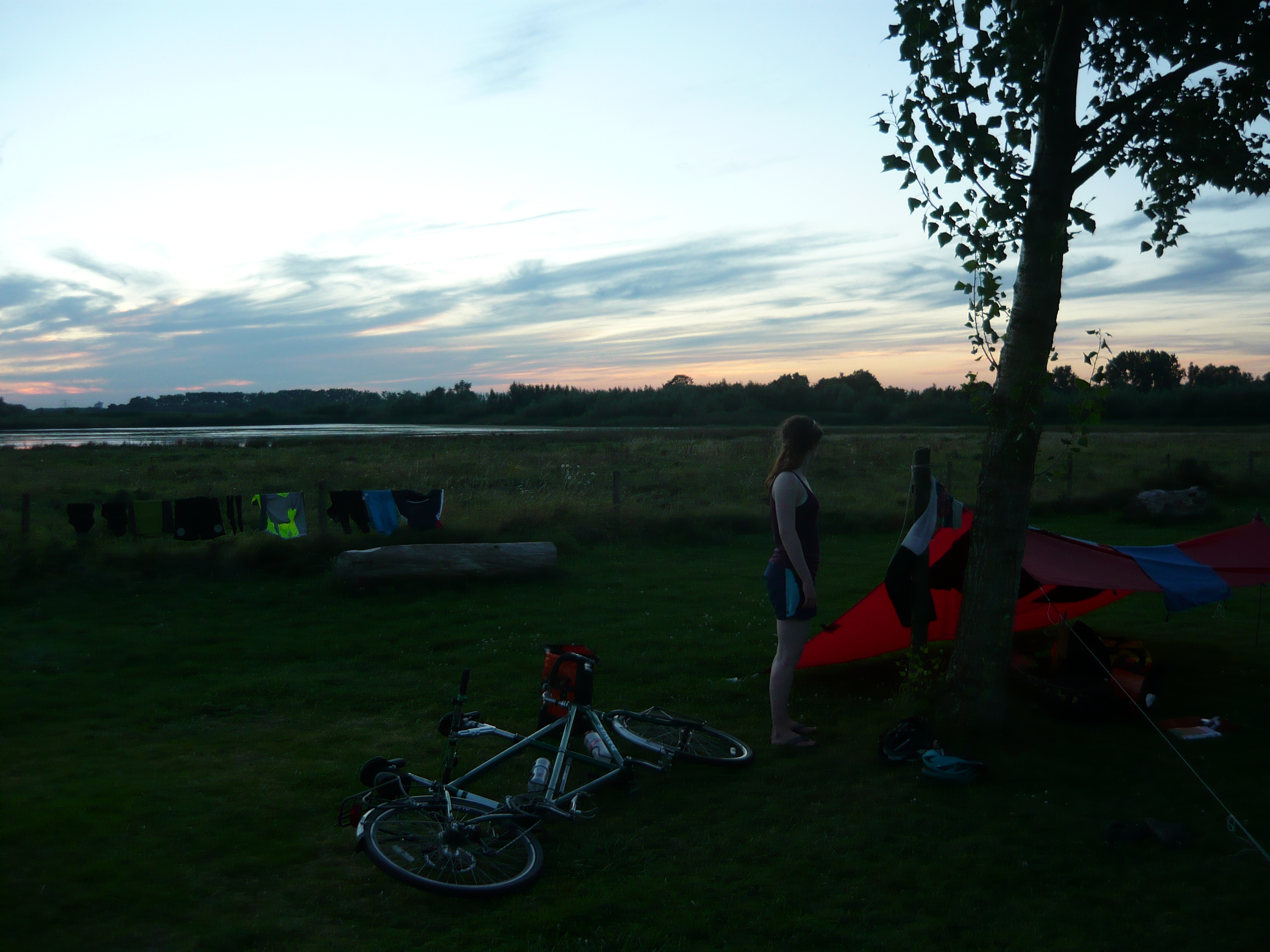 Everyone has got it wrong,” said Joe. “Natuur Kamperterrein is actually Dutch for ‘woken up by geese’…”

It was our second day of waking up to the dulcet tones of honking. Who needs an alarm clock when you have an over-zealous acapella group of geese? I unzipped the tent outer. The birds were flocking in the thousands to the body of water beside the campsite. We’d been over so many bridges and ferries that I wasn’t sure if it was a river or a lake or even the edge of the sea. Natural campsite must, I suppose, have their downsides. If any of those birds poo-ed on my tent…

I am, I should probably tell you, very careful with my tent. Over protective, Joe would say, but then he did manage to explode a black ball-point pen over the light yellow inner on its second outing. It still hasn’t come out of the fabric.

This Vaude Taurus II was my 19th birthday present and I think of it as my first house (much to the alarm of my mother). My tent was my ticket to independence on the hills. Plus, if you want your gear to last forever – which I always do – then it makes sense to try to keep it nice for as long as possible.

Zipping up the tent porch again, shutting out the geese, I pulled our breakfast inside. It was cold pasta. We’d agreed that trying to cook breakfast as well as dinner was too much faff. We didn’t want to carry loads of heavy cereal and the milk would probably go off too quickly in this heat. So, we were over-cooking for dinner and eating leftovers for breakfast. But neither of us wanted to wait to warm it up. So there we were, shovelling cold pasta and tomato sauce out of a dew covered pan Glamorous.

I should also tell you that I am, typically, not a morning person. Except at 4:30am, when I’m dancing around a group of tents walking up even grumpier teenager. At home, if I don’t wake up with the light, then I hate loud noises or bright lights. By with I mean, don’t speak to me… or turn the light on. So, unsurprisingly, I wasn’t the first out the tent.

When I did eventually clamper into the light, I went over to the fence to collect my washing. We’d been cycling for 4 days now and I’d already had to do a wash. In a sink, mind you, plugging the drain with a sock.

I’d left my cycling shorts (and said sock) out to dry overnight, pegged to the barbed wire fence on the campsite perimeter. The socks were fine, and all of Joe’s clothing, but my shorts were in a state. They’d been ripped across the right leg, just above the pocket.

Perhaps using barbed wire as a clothes line wasn’t such a good idea.

But the more I inspected the rip, the more suspicious it looked. It wasn’t just above the pocket, but on both sides of the zip, as if something had pulled it hard from one end. I looked at the horse the other side of the fence. The horse looked over, guiltily. We stared at each other for a moment before it snorted and turned back to the grass. I snorted too and turned away.

I had one pair. We were travelling pretty light, paring it down as much as we could. In fact, we were still throwing things out of the bags minutes before we strapped them on the bike and pedalled out of Cambridge. There’s less space on a tandem for carrying panniers than on two solo bikes. We still had 96 litres between us, but the knowledge that you’ll have to lug it all up a mountain or two in Switzerland is enough to keep to the minimum.

All I had was a pair of running shorts, that I’d been using as pyjamas, and a pair of walking trousers for cold evening. Neither of those would be very comfortable on the bike and I’d probably tear the trousers to shreds in the gears.

What could I do?

I put the torn shorts on.