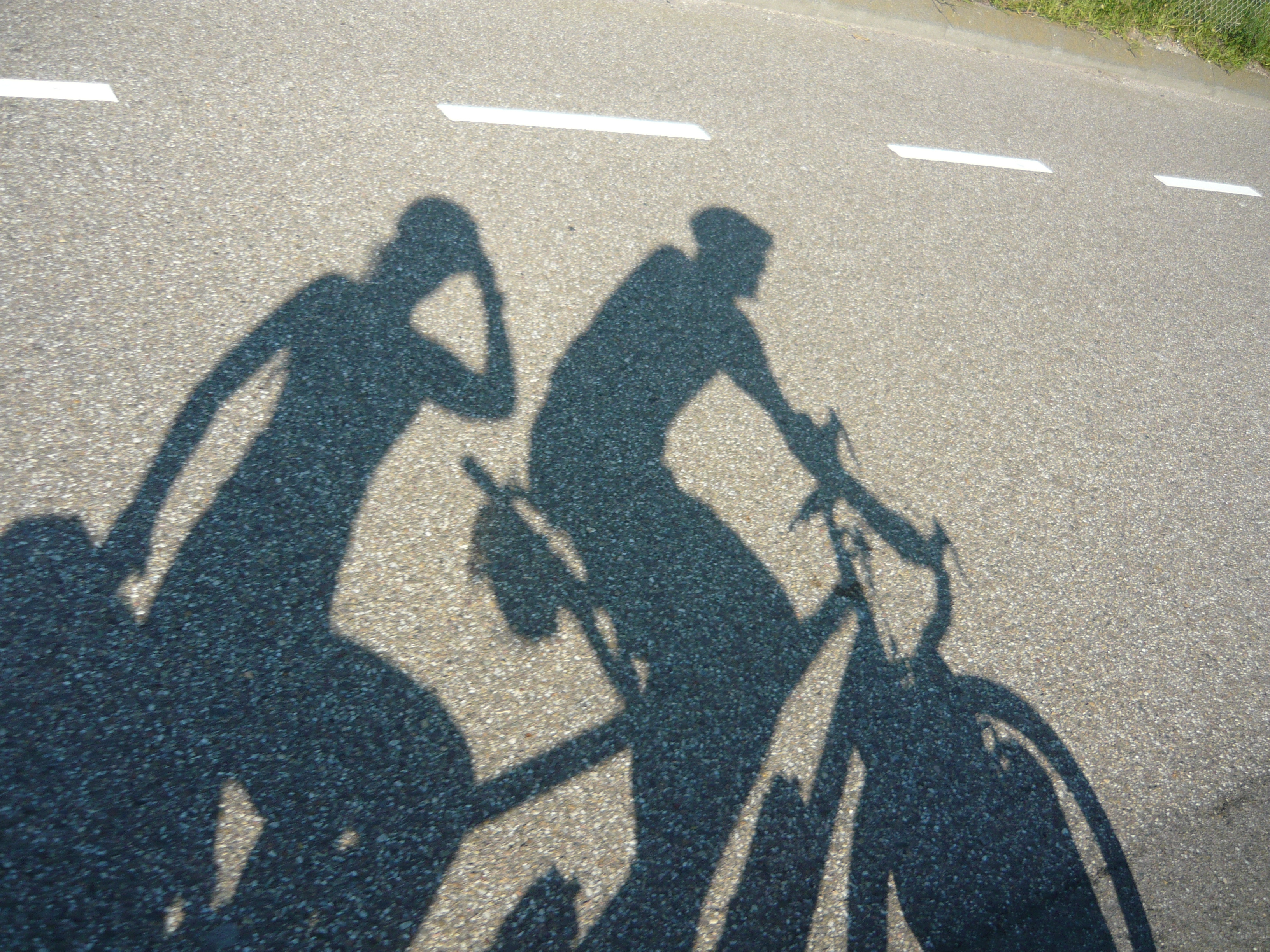 Pedalling hard into the sunset along a cycle path that apparently doesn’t exist, I’m reaching the level of panic. We have nothing booked. The Dutch cycling network maps we’d carefully bought ahead have no detail.

That purchase was about half of the planning we did. Great news then, that they’d missed the huge off-road highway of a cycle path. Absolutely brilliant.

Our first pedal strokes off the ferry were picturesque. We rode between grass and water, both flat and ochre in the lowering sun. The strange modern architecture of Hoek van Holland punctured with the bright colour panels of a windmill. But afternoon sun on the water soon deteriorated into chaos.

I hate navigating in cities. I’ve been known to take a bearing down a minor road, just to check it’s going the right way… and that’s using a 1:25000 OS map. Here I’m working off a map with half the detail, helpfully representing civilisation as an indistinct grey smudge.

Joe is 6’2″  and when I’m sitting behind him on the tandem, I can’t see anything in front of us. Not a thing. Usually that’s okay, because I can see everywhere else. Right now, it’s causing a nightmare. Stress levels are high. In fact, they’re right up there with teenage memories of my parents trying to drive a hire car in Crete.

We approach a junction.

But I can’t see the signs or the junction from behind him. Better still, none of the numbers are on my map.

In Holland, the bike network is marked out by a series of waypoints, labelled with a two digit number. Many local cyclists just write out lists of numbers and attach it to the front of their bike – on a cross between a clip board and a music stand. We were sensible and had the network maps, not that the network maps were being sensible.

I’m used to navigating slowly and precisely on open moorland. Here you can’t see the way for the tower blocks, road crossings, trees, underpasses… never mind Joe’s back. Plus I’ve just been thrown out of a boat onto a huge scale map, in a country I’ve never been to and I can’t even read the signs, even if I could see them. I’ve got no compass and we’re travelling at least 3 times my normal walking speed. It’s all going so fast that I barely have time to study the spiderweb of green lines strapped to my handlebars under Joe’s seat.

What have I got myself in to?