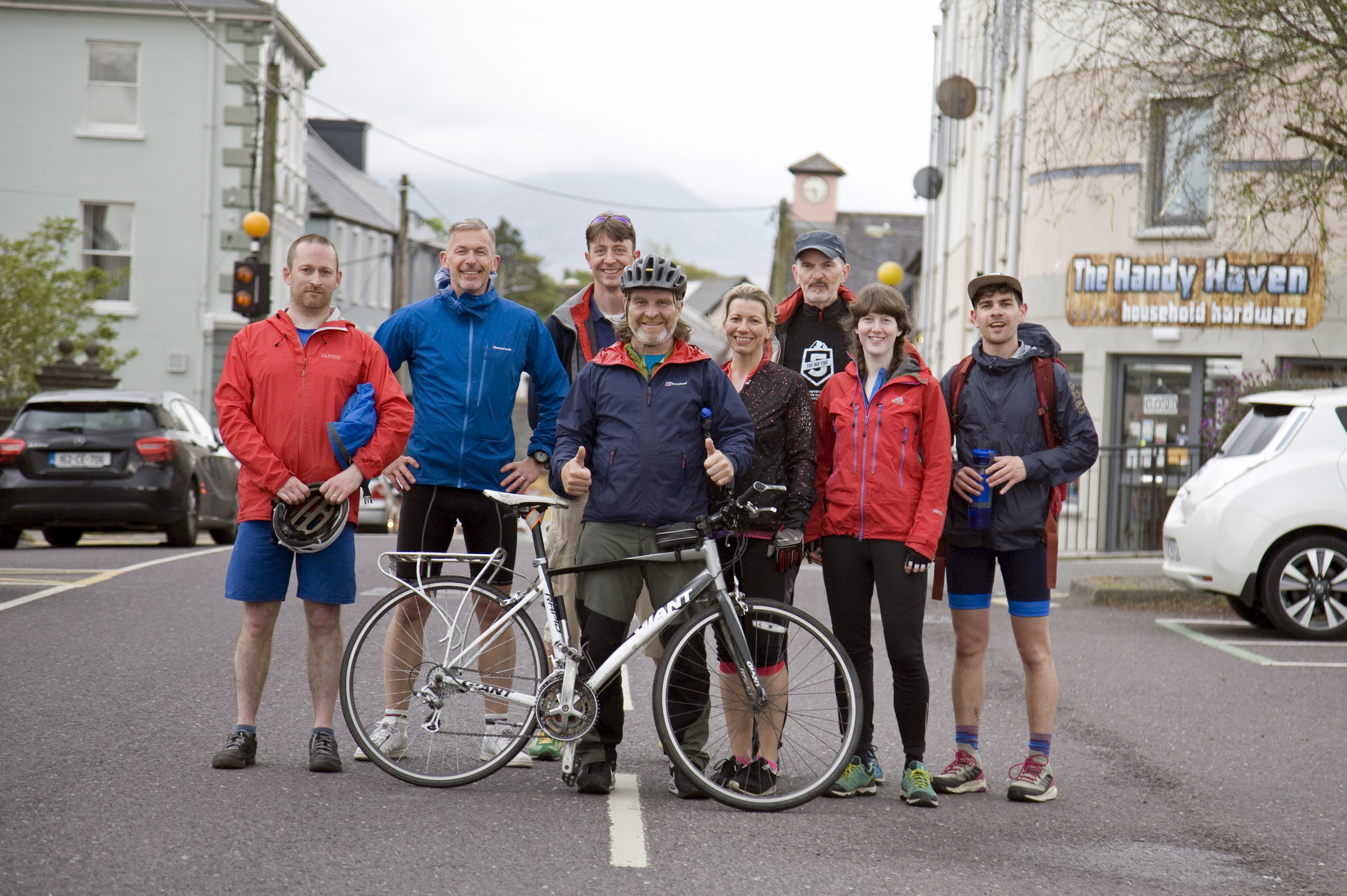 When I stepped on the ferry in mid-September last year, I wasn’t expecting to be back in Ireland for a while. Merciless as it sounds, I rarely ever revisit specific countries. Never mind the same area of the same country (except of course, the one I live in). Time is short and the world is wide.

But, for reasons beyond my reckoning 9 months ago, I stepped back onto Irish soil in the middle of May 2019. This time I would be heading back to an area I cycled through during the Irish 3 Peaks challenge. Specifically, to the Reeks District: the area that contains the 3 highest mountains in the first place!

Stepping Back in Time

It took me a day before I realised where it fitted into the Irish 3 Peaks Ride. Kilorglin was the day that it was so wet I went into a cafe. I had some quality time with the heating vents in the local Aldi. Plus some quality time sitting on the grey stone floor under the awning of the local library, eating lunch. My overwhelming memory of the place was grey and wet and rooks. Because there were rooks playing in the fountains in front of the library.

This time round I felt welcomed into the local community. Or at least I did by the end of the week… during our last night out when we kept bumping into people we’d met! It was a bit like one of those movies when all the characters come back  for a cameo at the end – and probably a big song… Although that didn’t happen.

What brought me back to Ireland was another challenge. Not of 3 this time, but of 5. The Reeks District tourist board were launching their Big 5 Challenge and they needed some people to actually do it. The challenge is:

To get on the wall of fame, you have to do the lot in 5 days or less. P.S. Did you spot your’s truly in the stock photography if you clicked the Wall of Fame link?

We were going to do the lot in 3 days and there was a certificate and a t-shirt at the end. Err… yes? I’ll do pretty much anything for a free t-shirt.

The hiking on day 1 put me at ease. I’d climbed the mountain before, even if I hadn’t done that particular route. Call me silly but I find myself wanting to know where I fit in with a group before I arrive. As in, will I be the slow one? Will they all be athletes or super serious? Luckily I felt like I fitted right in. We were a small bunch of outdoorsy journalists who were just as happy climbing a mountain as debating punctuation.

The second day was watersports and what I was most looking forward to trying. My kayaking experience is limited. The last time I went surfing was in Year 9 at school and I never managed to stand up. If I was the kind of person to write a goals list for 2019 it might have included “try SUP”.

Needless to say they all delivered. I managed to stand up on a surf board (although proceeded to wipe out a lot after that too!). Kayaking across an Irish lake in the rain was a serene and wonderful experience. I think I need to do a kayaking adventure one day. But hands down winner was night SUP.

We got changed out of of our fancy dinner clothes into our swimming costumes, then drove to a little mountain lake in the middle of nowhere. I never thought I’d take a taxi in a bath-robe, but there you go! The lake is in a Dark Sky Reserve, so it was pitch black by the time we arrived. The instructors had got a fire going and set up a tarp for us to get geared up under. Then came the hilarious part. We slowly headed out onto the lake, like standing on water. All I could see was the glow stick on each person – never knowing quite how far away they were. The instructor taught us how to turn, but I couldn’t really see in the dark. Somehow it worked out just fine.

“Have you ever read the Night Train to Lisbon?” I asked, feeling for the first time since A Level English Literature that I might be in company who had. We were part way through the Ring of the Reeks cycle, waiting for the rest of the group to catch up.

“Well there’s a bit where they talk about revisiting places you’ve been as revisiting a version of yourself.”

We leave something of ourselves behind when we leave a place, we stay there, even though we go away. And there are things in us that we can find again only by going back there. We travel to ourselves when we go to a place though we have covered a stretch of our life, no matter how brief it may have been.

That is exactly what I was doing. I was standing on the rock I’d stood on in September, where we’d had lunch. We’d been cycling in the same direction: from Moll’s Gap towards – and over – the Gap of Dunloe.

“And what was the version of you that was here before?” asked Lucy.

“Well it was a lot sunnier last time I was here!” I said, which isn’t really an answer. As they say, if you can’t think of anything appropriate to say, it’s best to confine your comments to the weather.

The truth is, the last time I was in that valley, I was on the brink of a disaster and I didn’t know it. Weeks away from it. It was the lull before a storm that would rip apart a narrative that I’d constructed for the past 6 years of my life. That’s all I can say really. There are some things that shouldn’t be shared publicly until long after the event. But if I’d been in a movie, the foreboding would have been up to the max…

I can see that now, but I couldn’t see it then. Standing in the road, I looked down on a version of myself, lying on a rock between the blackberries and felt sorry for the things she had to come. If she’d known they were coming so soon, she would have behaved differently. She would have said things she can’t say now. She would have wanted to know. But she didn’t. It was a surreal experience.

As we cycled on, I revisited all the memories of the last time I was on that road too. From meeting two cyclists trying to beat some record on a tandem, to the markings on the road. Every turn I was seeing the world now and the world then at the same time. And then I reached the point where someone I thought I trusted told me they thought I was a rubbish cyclist. I was astounded that I have to prove myself, even to them.

So cycling this pass again became sort of making a point. I didn’t do anything differently. My attitude was the same, my cycling was the same. No one in the group would have noticed anything different. But inside, I was proving myself in a way that wasn’t possible at the time. Reaching the top quickly was all the sweeter. Think I couldn’t keep up on my own? Watch me.

Climb Ireland’s Carrauntoohil – A Guide to our Route