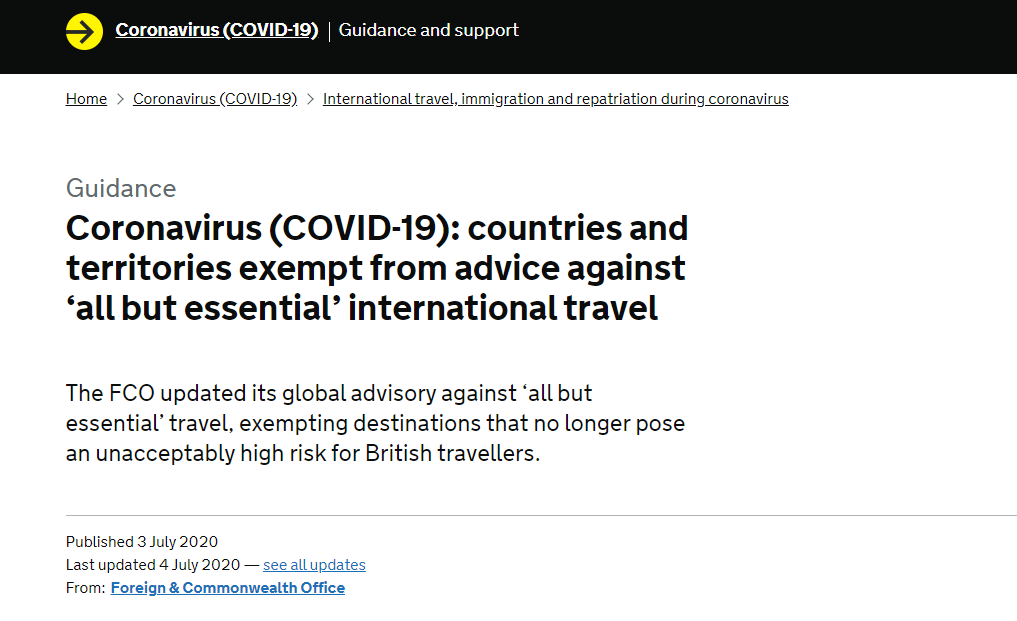 Well, it’s less than a month until my flight to Spain. The pre-expedition countdown clock has started ticking in the back of my head. It’s got an old school digital dial with red numbers – like the kind in James Bond movies that need diffusing…

But before we talk about that, I need to make a quick little announcement. Thank you so much to the 99 people who helped to fund my All the Tors book Kickstarter. In fact, you went above and beyond because we finished at 120% funded. You utter legends. If you missed the boat, don’t worry, it’ll be out on Amazon in paperback before the end of the year. Jump on here and tick that you like books to get notified.

Right, now before I turn this into a book update, let’s quickly get back to why you’re here: Spain.

A few days ago, the FCO released a list of places where they were lifting travel restrictions. Spain was on that list. I was a mixture of pleased and relieved to see it there. Then 4th July happened: the day domestic travel was allowed again in the UK. Suddenly, Devon was filled with campervans and people who had no idea how far 2m was. I have not knowingly been within 2m of a person in over 100 days, particularly not a stranger, except in full PPE. Going shopping made me feel genuinely uneasy. This is going to be a bit of a culture shock.

It got me thinking about me going to Spain and how Spanish people might feel about me going. After some musing (and half of a spoof poem of Yeats’ Second Coming) I settled on my opinion. It’s not people travelling that I take issue with, it’s people being careless or indifferent to others. I mean, there is still a virus out there, right? No one’s said game over, back to normal. So being mindful of local cultures and being overcautious rather than gung-ho seems to be the way to go. Or at least that’s what feels right to me.

I’m also left with the concerning thought that maybe I booked my tickets too late. If I’d gone for mid-July then I could go now. By 1st August we could find ourselves in a second lockdown. Catalonia is already back under lockdown as is, I believe, Leicester. Fingers and toes crossed that the world isn’t accidentally taking a step backwards.

In terms of other things, I’ve finally nailed my route down. Turns out I’d massively underestimated the length of my walk in, which is what was throwing everything off times-wise. Also letting go of the idea of staying at Refugio Poqueira allowed everything to settle nicely across the week in terms of distance. It would have been really nice, but they’re giving priority to groups of over 6 people, so the chances of me getting a spot is slim anyway.

On the kit front, GPS Training have very kindly stepped in to lend me a GPS unit. So, my friends, you will have live tracking! I’ll put the link on the Spanish 3000s page for those interested, when I have it. I am still technically tentless and I’m waiting until the 11th hour just in case something comes through. If not, I’ll bite the bullet and buy a cheap 1-man, freestanding tent of decent quality. The 11th hour might actually be tomorrow afternoon, because I’d like to get a chance to pitch it without a last second panic. Current research based on little more than price and postage speed has me on the MSR Elixir.

I’m also sorting out the food shopping list. You’ll remember (some of you!) that for my All the Tors gear list I meticulously calorie counted. But I didn’t eat half of it. Well, okay, exaggeration. But I didn’t eat any of the porridge, or a whole bag of wraps less than planned, or a few dinners because of extremely bad weather. Since then I’ve also done three days in Slovenia almost entirely on a pack of plain wraps, a bag of cashew and cranberry mix and a Slovak version of Pink Panthers (biscuits). This seems mad in hindsight and I blame it on the fact I was reading Al Humphreys’ My Midsummer Morning at the time. He lived off nothing too.

So, I’m trying to find the balance between enough food and too much food, between sweet and savoury, weight and calories etc etc. Of course, there will be peanut butter wraps. But I do need to make sure it all fits into the largest clip-lid tupperware I own to fox-proof it.

Aside from that I’m all in. All my transport is booked; all my accommodation booked. I made a mad scramble to book a room in the hotel at Malaga airport before the international travel announcement incase everyone else did the same. I got a room. This position feels pretty exposed, because if this doesn’t go ahead I’ve got a whole load of cancelling and moving to do! But all I can do is prepare and cross my fingers.

My Oldest Pieces of Outdoor Gear