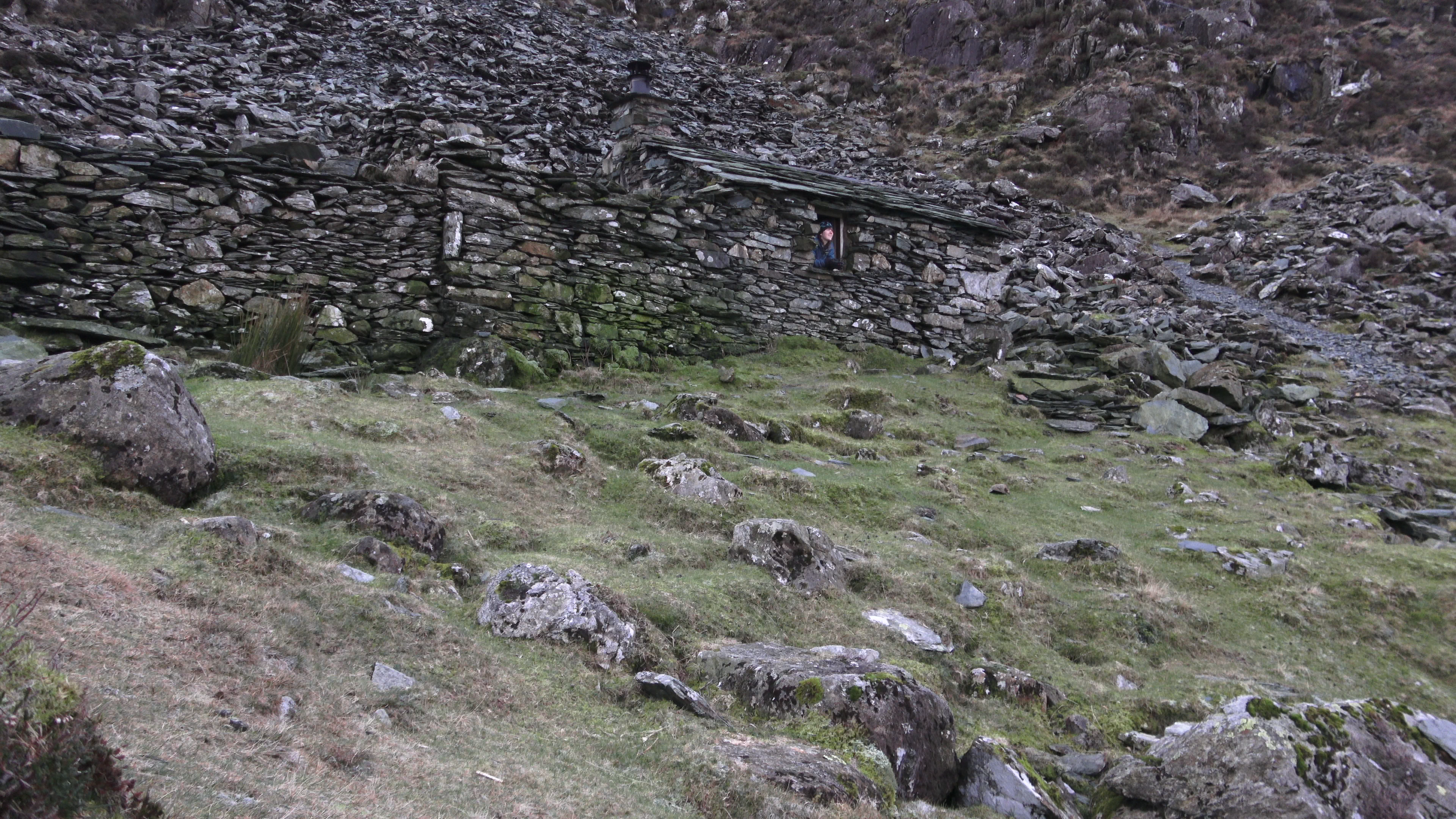 This bag is far too heavy,” I thought as I stuffed in yet another layer and tried to yank the lid down over it. Poor rucksack.

It was a gorgeous, chilly afternoon in January. The first day of January, in fact. I’d spent the early hours of the morning up a mountain and here I was again, setting out from Borrowdale YHA. This time in the opposite direction… and with a hell of a lot more stuff.

I felt like a tortoise as I trudged up Honister Pass with everything in my bag. Specifically: 4 days worth of clothing, tent, sleeping bag, camping gear, work laptop, notepad, diary… It was a bit of a slog. And hot work – leaving me with a circular and frustrating problem. How to fit outer layers in already exploding bag?

Through the slate mine, I headed up the wide, steep path to the top of Fleetwith Pike. About halfway up, I met a man coming back down off the mountain. The elderly gentleman stopped me as we passed.

“Do you know the area well?” he asked.

“Fairly well,” I said, not sure if he meant the Lakes in general or this bit specifically. “How can I help?”

“You know the quarry at the top of this path?”

“Err…” I held the map out and between us we pieced together his story.

The man had been out walking with 3 other people. They’d gone on together towards the crags to look at the view of Buttermere. He had a bad ankle, so he stayed at the top and waited for them to come back. The sun was getting low in the sky and he’d started to head back down to the car park – worried they’d come back by some other path and missed him.

“We’re just parked down there,” he gestured with his stick towards the slate mine car park, “so if you see them, will you tell them I’ve gone back?”

“Of course,” I said. We carried on our ways.

Not 500m up the path, just as I was cresting the top of Fleetwith, 3 walkers appeared. Two men and a woman. I might not have spoken to them, but they each had a single walking pole. Just like the old man… I smiled.

“Excuse me,” I said. “I don’t suppose you are missing one of your party?”

(Yes, I really did say that. I’ve been reading a lot of old/classic fiction and it creeps verbosely into my speech sometimes…)

“Yes,” they confirmed that they’d started with four.

“Well it’s just I bumped into someone a moment ago who was wondering after you.” I was pretty sure it was them, by now.

I nodded, “He thought 2 hours was a bit long to be looking at Buttermere for.”

“Two hours is not enough!” exclaimed one man.

“Have we really been gone two hours? Probably worried we’d got lost or fallen off something.”

“Anyway, he’s probably almost back at the carpark by now,” I said.

“You camping out tonight?” asked the man who liked to look at Buttermere.

This was a spur of the moment trip. I’d booked an open ticket home from Windermere and I had few plans. Other than needing to complete the southern half of the Langdale horseshoe for a route in Trail Magazine, I just had to walk to the station.

I rarely do things on my own and I thought it would be fun to have a little camping expedition. People have been talking a lot about bothies lately, so I thought I’d look up the couple in the Lakes and see if they were on route. One of them just about was.

It was a pleasant little navigation challenge to find it. Contrary to popular belief, the building is marked on the map, just not named as anything special. In amongst the crags and mine workings, it was very well hidden. I arrived late afternoon, expecting a magical moment of discover in an abandoned building.

This was not to be.

There were a couple outside, just leaving and another couple inside, having a hot chocolate mid-walk. Neither were staying, but it simply hadn’t occurred to me just how much of a public building it was. Once everyone else had left, I went in.

The little house had one small room. On two sides were flat wooden boards, like a bench or for sleeping on. There were two small windows and candles placed in every corner, and along the mantel piece above the fire. No wood, sadly.

I lit some candles, watched the sun go down and started reading the visitor’s book. To my alarm, many of the entries referenced a mouse who ate through bags, rucksacks – anything for food. There were other pages with statements like “Don’t believe them. The mouse is legend” and “He lives on”… I didn’t know what to think.

Visitors in the Night

I was under the mis-impression that spending the night in a bothy was rather like claiming a deck-chair at a swimming pool. You get there first, stake a claim and then it’s yours until you leave it. This is not true of bothies.

In the late afternoon, I was all comfy in my new home when a large bunch of walkers came to have a look in. It felt very odd – like I was hosting them in a small room that was as rightly theirs as mine. Then they left and it got dark.

I ate my dinner and, since there wasn’t enough wood for a fire, I got into my sleeping bag to stay warm. Lying on the wooden bench opposite the door, I couldn’t help but wonder if all my visits were over. Would someone charge in at 10 o’clock at night? I couldn’t exactly lock the door could I?

At around 6pm I heard someone coming. The wooden door scraped open and I hurried to untangle myself from my sleeping bag – and see who it was.

A man came through the door in a bike helmet. I could hear his cleats clacking on the slate floor. We were equally surprised to see each other. He’d been bikepacking and was hoping for somewhere warm and dry to spend the night.

“You settled down early,” he said.

I wasn’t sure how to explain that I’d only got into my sleeping bag because it was so cold. And what else am I supposed to do on my own in the dark in a bothy? So instead I said lamely, “I was up really early this morning.”

This, although true, was still not what I meant. I was still up in the early hours of this morning. That was because I’d carried a 4 foot Christmas tree up Castle Crag for midnight. Complete with star and lights, accompanied by friends with champagne and Bailey’s hot chocolate (mostly Bailey’s) we’d watched the fireworks over Derwent water. Pretty different to how I saw last year in.

Then of course, after midnight, you have to walk back down the mountain. Christmas tree and all…

Eventually, the bikepacker decided to head on to the nearby hut, in the hope of a warm fire. I settled down to a cold, pretty uncomfy night – wondering about visitors and mice and if I was supposed to use a roll mat on the bench…

It was, I felt, like pitching a tent and knowing that anyone who passed by was allowed to unzip the porch and come in for the night.

It’s exciting that places like bothies still exist. They don’t look after themselves. It relies on the good will of many people to keep them habitable and clean(ish). I bet it’s really good fun with a big group of friends – or if you’re the social type!

After a silent night, I woke up to find the valley in shadow and the bothy dark. There was a frost outside and I nibbled at my breakfast quietly. Thinking about nature and our place in it… and the year ahead.

Soon, I’d packed up my things, squeezed my enormous backpack through the little door and was heading towards Windermere. Did I enjoy it? Yes, I think so. I’m definitely glad I did it once. But, you know, I think I’d rather stick to a tent.

Fed up of my sporadic use of social media? Then you need to be in the Adventure Squad! More like a chat with a cuppa and as far from doomscrolling as possible. Or while you’re here, have a read of some of my other mountain adventures in walking and bothying. If you’re new to the blog (hello!) you might want to start here first. I’m a female adventurer based in the UK.

My First Night in Paris