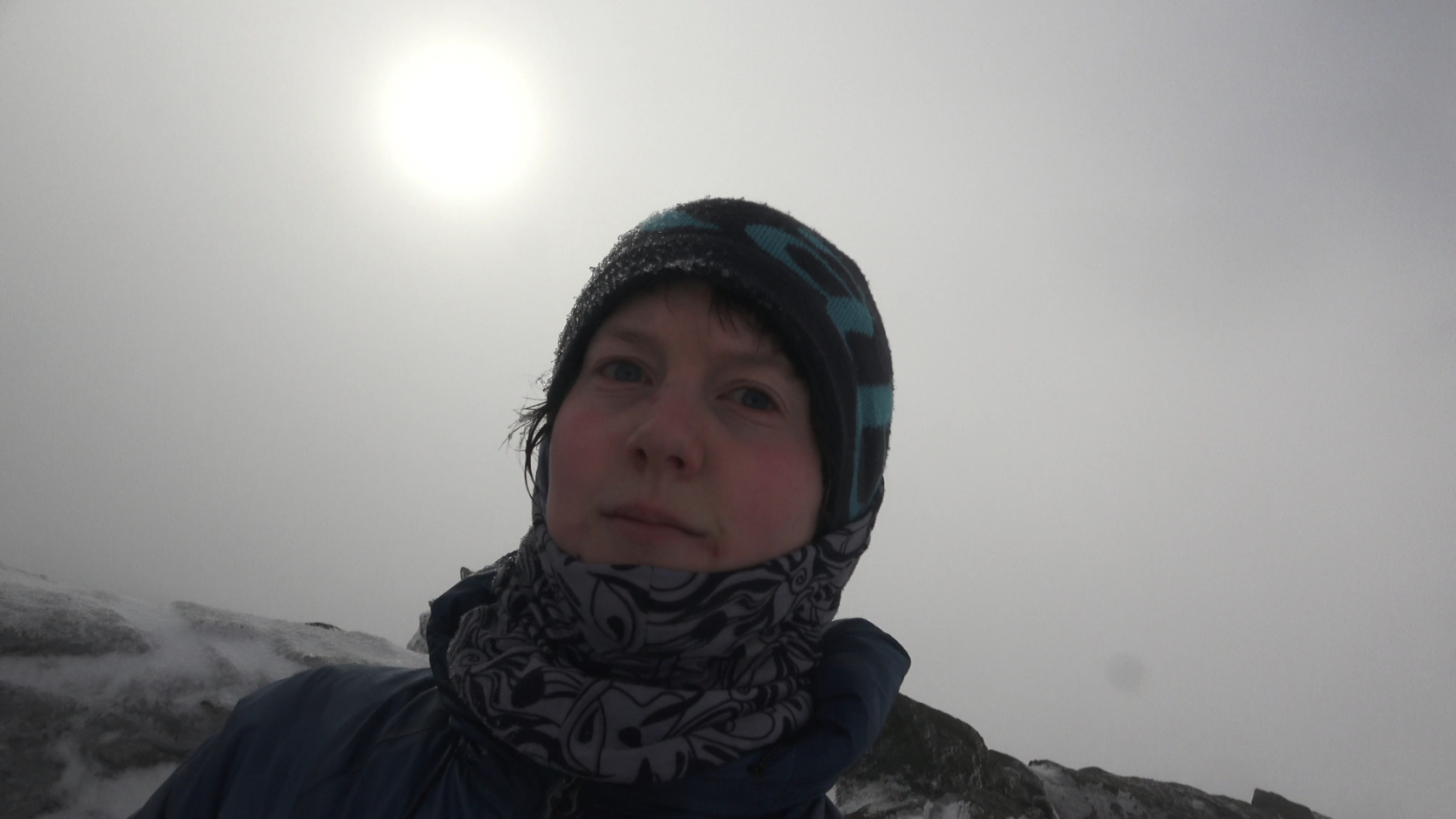 Tebay Services. Certainly glamorous by motorway service station standards. Completely non-glamorous on the scale of Best Places to Start a Walk. My aspirations for this expedition had melted the further north we’d driven.

Leaving Dartmoor under a blanket of snow and an icy orange sunrise, I imagined blue sky and perfect winter conditions in the Lake District. But hour on hour the view beside the motorway got wetter and wetter. Snow turned to slush turned to damp. Then, just to top it off, as we pulled into Tebay services, it started to rain. Thanks weather.

We procrastinated by going into the cafe and getting a drink. Well – I actually got a cup of chips because it was a whole £1 cheaper than a hot chocolate…! It was about 3 o’clock in the afternoon. Our friend and driver Bob jokingly offered us a last chance to quit as we took a last look over the maps – caught between amusement and concern at our expedition.

In truth, we hadn’t really planned it. Short of getting to the starting point with the right kit and a guestimate that it would take 2 nights. It had better not take more than 3 days, because that was all the food I’d packed!

We layered up into waterproofs, took our bags out the boot and watched Bob drive away. Now we were committed.

Darkness was falling already. We’d been walking for several hours and now I was standing by a bend in the road, back to the blizzard. Behind me, the road was a flat, black river through the white. The cloud had descended and our torches reflected off the haze.

As we started walking beside the road, a car pulled over and reversed back towards us.

“Are you alright?” Asked the driver out of the window, “Do you want a lift somewhere?”

“No thank you,” I said, grasping for words to explain that we were in this abysmal weather by choice.

Progress had been slow. First a farm track so smoothly iced over that I considered crampons. Next relentlessly slushy snow, covering the path in drifts. The big thaw across the valleys had started. It left the snow too wet to walk on, but stiff enough to walk through if you kicked wide, slushy steps. Breaking trail was hard work.

Usually I’m up for walking until 10pm and had said as much for this trip. But with the dark and the cold and the slush-ice combination, camping seemed very appealing. Why do we always think it will be better in the morning? It was becoming unpleasantly windy too.

One of the most exciting prospects of this trip was camping in the snow. I’ve often camped to find a fresh layer of white outside in the morning. Never had I pitched a tent on it. Resigned to not getting as far as we’d hoped, we aimed for shelter behind a field wall on the lowest bit of open access land. The snow was blown over and crusted – exactly like the icing on a Christmas cake.

In the end, we found a flat-ish sheltered spot behind a pyramid of wrapped bales. There was an inch or so of snow on the ground, but the earth was so hard underneath that we struggled to get the pegs in. Andy (team mate) managed to get his petrol stove working – hooray! He’d said in the car that he hadn’t tested it and the stakes were considerably higher for me, given I had dehydrated meals…

My night’s sleep was fitful. As usual, I woke up with my hip on the floor through my camping mat. It’s probably a slow leak that I’ve never quite got around to doing something about. One of those things that’s just not quite annoying enough to fix. However, when you’ve got compacted snow under the groundsheet, it is definitely annoying enough – let me tell you! Anywhere that touched the floor was incredibly cold.

Eventually I worked out that I could inflate the mat for several breaths, be lifted off the floor and fall asleep. Then wake up an hour later, with my hip on the floor, and repeat. If you’re wondering I have an Alpkit Numo. I really want to like Alpkit, because I like what they stand for. But based on a sample of 1 piece of gear I’ve bought from them, they’re not doing so well. This is the second time it’s had a fault. Damn it guys, what am I doing wrong? At least their support’s excellent…

In the morning, I stepped out the tent into a white haze and a sickening sense of deja vu. We were in a white out, except for the incongruous stack of black poly-wrapped bales. Neither of us wanted to do micro nav in the slush. But we still couldn’t quite bring ourselves to make a firm decision yet.

We had, however, decided that Pillar was definitely out of the equation now. There was no way we could get all the way over there in these conditions – at least not still arriving at Braithwaite in 2 days’ time. You’ll remember in my adventure announcement post that one of the key aims of the expedition was to get to Pillar. But given time constraints and weather, it really didn’t bother me to cut it out. There wasn’t really another option.

After breakfast it seemed to be clearing, so we headed up and out onto the hill. At the moment we were still caught between two options:

Fortunately both of these options started in the same direction. We would walk uphill and across some of the fells below Haweswater before having to make a decision. As we set off, neither of us really fancied another cold and wet night in a tent…

But then we got onto the fells, the weather cleared and all the misery of the night before was forgotten. Isn’t it funny how the human brain works?

Unfortunately, our progress was still slow in the slush. Although the hills in the distance looked tantalisingly snowy… At around 10 o’clock, we had to make our decision.

In the end, we went for option 2. Mostly because if we did crawl into Patterdale in late afternoon and needed to bail, we had no idea whether there’d be any onward transport. They run buses down that valley, but not very often – and I had no clue about in winter. I still find it really hard to choose to abandon plans, even if I know it’s for the best.

I sighed, “If I was with a group, we’d definitely be going to Ambleside…”

We arrived in Ambleside 10 minutes before the 555 bus arrived. Almost like we planned it. After an hour on the bus up to Keswick, the end was in sight. We got off the bus as Booth’s were arranging their sandbags against the on-coming thaw.

A quick walk, along little lanes and footpaths, we arrived in Braithwaite. It was not what we expected and we were a full day early. Our friends would only be expecting us from the next day onwards. I vaguely wondered if I would be heating up ration-pack on the steps of the bunkhouse this evening.

At a few minutes to 7 pm, we arrived at the bunkhouse to a round of applause. Everyone was so impressed at how early we’d arrived – and how quickly we’d walked. Just in time for dinner as well! I only managed to keep a straight face about it for 10 minutes…

One of the things that bothered me most about cutting short was the reaction of my friends. The teasing – and don’t get me wrong, I’m sure I’ll be getting jibes about catching a bus for a good year. But the reaction wasn’t anywhere near as bad as I imagined. I’m pretty sure we made the right decision.

It’s important to talk about adventures that don’t get completed or go remotely to plan. You learn as much from your misses as your strikes – if not more. So I hope you’ve enjoyed my honesty. I want to call it a complete fail of an expedition… In some senses it was – we didn’t achieve anything near what we wanted to.

But on the other hand, we reached Braithwaite using only our resources. We did spend a night out camping on the snow. It was definitely an adventure, although not at all the kind we’d intended. And, well, the only thing that’s left to do is try again some other time. Pillar is still beckoning…

The One that Got Away…