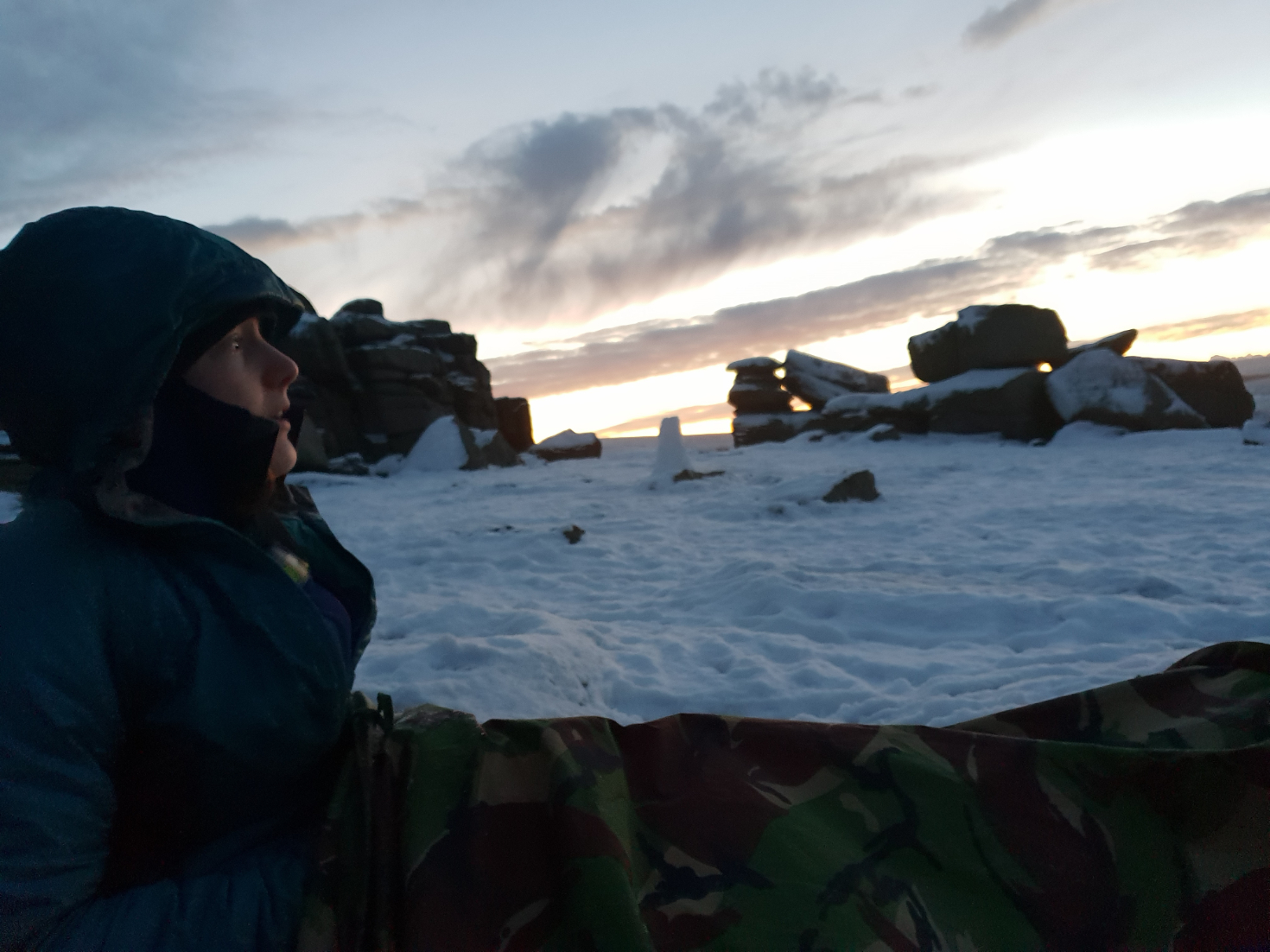 It was a very dark night. The last of a very dark year. Low cloud hung over the valley, creating a thick mist that cut off the end of the road. The street lamps were visible only by the fuzzy halo around them. Everything was quiet, except for the crunch of my feet on the hard snow. There wasn’t much – a thin icy layer over the pavement – but it was enough to make me focus on my feet.

It had snowed the night before. Then again this afternoon. Huge flakes tumbling down onto my front lawn. I stood inside, elbows on the windowsill and watched. Awesome, but not exactly ideal. I messaged Alex, still staring at the sky: “Lol the weather…” She was watching it too.

How I ended up in a bivvy…

Alex bought a bivvy bag at the start of the year. She used it every time we went camping together. It felt a bit ridiculous, me pitched in a 3-man tent, her lying next to it in a bin bag. Bivvying isn’t something that’s ever particularly appealed to me. People talk about how great it is because you can see the stars and feel one with nature, which you can’t do inside the walls of a tent. I point out that, if they can see the stars, then that means they’re not asleep. And I like tents precisely because they block nature – wind, rain, sheep, midges – out entirely, so I can get some sleep. A tent is a little piece of home and safety that you can carry on your back. Having to lie staring at the sky all night, in all weathers, trying to sleep sounds like a special sort of misery to me.

Misgivings aside, I was eventually persuaded that bivvying was a fun idea and that we should do it together. So I bought one and we planned a magnificent first night bivvying. We’d go up our local hill on New Year’s Eve until we found somewhere nice. We’d set up, watch the fireworks, bivvy then go home in the morning. A perfect plan, because we’d be staying up all night anyway, so it didn’t matter if we couldn’t get any sleep. Then it started snowing.

We decided to go anyway. We had all the kit to survive, plenty of experience in the cold and we were so close to civilisation that, if it all started to go wrong, we could just walk home. Naturally our parents were horrified, but they’ve come to expect this kind of thing.

As I reached the end of the lane, where the street lamps stopped and the moors began, I walked out of the cloud. I waited at the corner for Alex with my torch off, the entire night lit by a full moon in the deep navy sky. Stars everywhere, moonlight reflecting on the snow. Dartmoor ponies, unable to reach the grass, wandering over to see what all this was about (and whether they could steal any food). It was like something out of a novel: two conspirators meeting on the hill by moonlight.

Alex arrived with a large rucksack to match mine and we carried on together uphill. Bivvy bags may be small, but winter sleeping bags, warm jackets, stoves, hot chocolate and supermarket-reduced doughnuts take up a lot of space. I’d also brought my camcorder, but the Peak Design clip I had it on was so strong that it broke a hole in the camera’s casing. Fortunately it didn’t fall far to the ground and was cushioned by the snow. But my budding filmmaking plans kind of went out the window.

Soon we reached the area we’d planned to sleep in. The snow was shin deep, more in the drifts – the most snow we’d had so close to home (and Christmas) in ages. To say we were excited was a bit of an understatement. I spend a lot of time battling with Scottish winter mountaineering and Alex has lived in Switzerland, but there’s something magic about unexpected snow close to home. It turns you into a child again.

We found a flat bit of ground, sheltered behind a rock, pointing in the direction we thought would have most fireworks. The night was very still and it was so bright that we didn’t need our torches. We set up camp, legs in sleeping bags and bivvy bags up to our waists, then as many warm layers on top as possible. It felt like the strangest thing, stepping out of my boots and into essentially a waterproof sleeping bag.

We put the stove between us and started making hot chocolate. Alex was unequivocally right to shake the gas to make the stove light, not just invert it. I grovel in her correctness. Mug of hot chocolate in one hand and on-date, slightly squished doughnut in the other, we waited for midnight.

At this point, it’s fair to say my abs are not cut out for bivvying. Because of the slope of the hill, we had to be sitting half up for a view at a relaxing angle. Think like recliner deck chair. I’d put my bag behind me to try to prop me up, but it was like being halfway through a sit up.

As it approached midnight, a few bursts of fireworks punctuated the skyline. A car appeared and parked up not too far away. We wondered what they might be up to – probably nothing good, arriving at an isolated layby in the middle of the night. But when their fireworks started we gave them a cheer – not that they could hear us. Then, finally, the clocks in town struck midnight and suddenly the whole horizon was alight. Well worth it.

Just to top it off, as we were settling down to sleep, a shooting star passed by. Goodbye 2020 – and good riddance.

In the morning, a few hours later, I woke up inside my little tunnel of bivvy bag. Guess I had got some sleep after all. Next to me, Alex said, “Oy, are you awake? You’ve got to see this.”

Gingerly, I unzipped the bag, letting in a blast of cold morning air. Yes, unzipped. I got an army surplus bivvy bag with a zip across the head and two tiny fibre glass poles. I think it’s perfect because it’s lightweight and able to shut out the cold. Alex refers to it as my tent.

Sunrise. The sky was a frozen blue and the morning light was coming up golden, illuminating the snowy slopes around us. Then one by one the clouds turned pink and orange until there was a deep red glow in the east. Like the Lion King, but with snow all around us. It was incredible.

We packed up quickly, leaving just two strips of grass in the snow, where it had melted underneath us overnight. Again, it felt pretty strange standing at one end of my bivvy, pulling on trousers over leggings and stepping into slightly frozen boots. My Camelbak had formed icebergs overnight and rendered the tube useless – rookie error number one! I got a very cold face trying to drink out of the other end before we set off into the sunrise.

Am I a complete convert to bivvying? Not just yet. But I’ll definitely be doing it again. And although snow bivvies aren’t exactly a normal way to get into it, I wouldn’t have it any other way. What a fantastic way to start the new year. I’m not sure anything else will live up to it.

Want to read more like this? How about some wild camping or some adventure stories? Or join my Adventure Squad newsletter to hear about my adventures as their happening. If you’re new to the blog (hello!) you might want to start here first.

My First Night in Paris