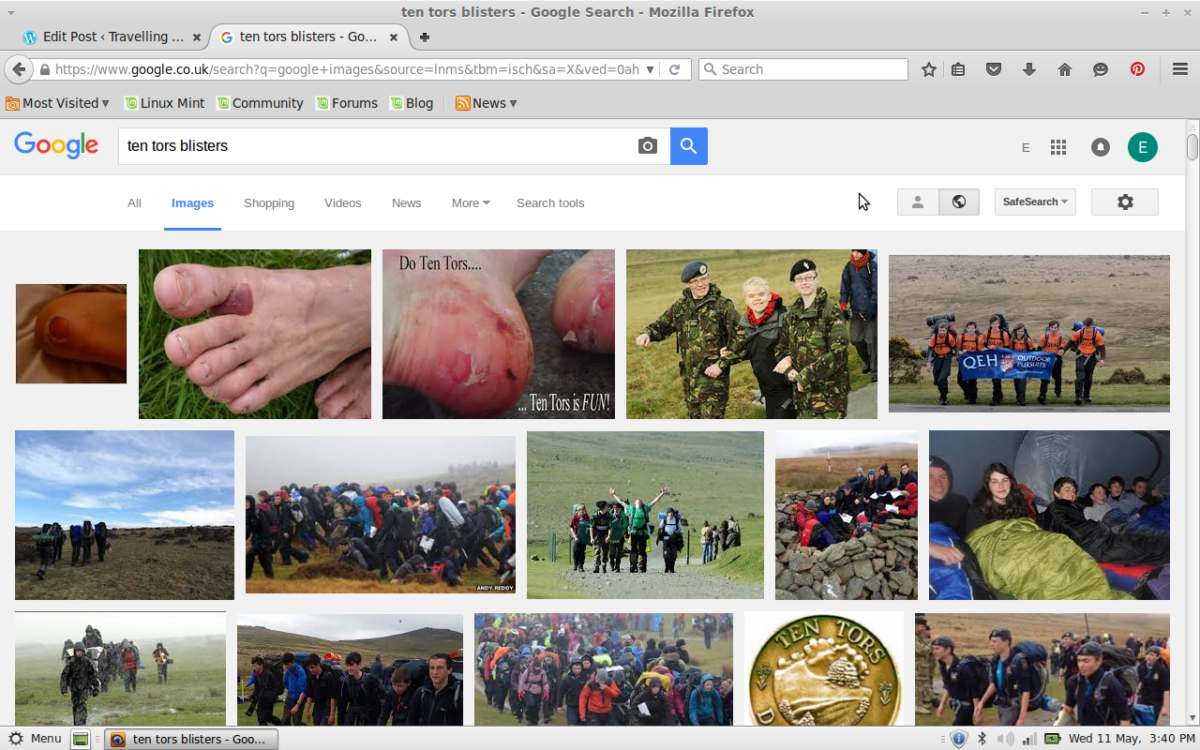 Blisters used to be my thing. When I was in my middle teens I would regularly wreck my feet beyond recognition. To me, it was all in the name of a good long walk. Long walks and pain came hand in hand. And, bizarrely, I was proud of it. Kind of still am, to be honest.

There’s still a certain satisfaction in other people’s horror when I talk about “breaking my feet in” rather than my boots. But I haven’t had (what I’d call) a “really good blister” in years.

Lack of blisters is probably down to two things: better boots and shorter walks. By better I mean vaguely fit my feet and by short I mean less than 40 miles a day…

But my blisters from a good 7 years ago were bad enough to make local fame. The walking kit shop in the town where I live still use my feet as a benchmark for dreadful. Apparently, if someone comes in complaining about a blister that they need a magnifying glass to spot, they’ll cite me as an example.

That makes me a tiny bit proud.

I’ve even been asked for a picture of my worst to put on their wall of fame. But I didn’t think I had any pictures saved…

Last week, I was at a first aid briefing for the Ten Tors event. For those (probably most) of you who haven’t heard of it, Ten Tors is a long distance walking and endurance challenge for teenagers in the South West. Ten Tors 2016 was last weekend.

In the first aid briefing, we had a standard presentation with slides covering common issues like heat stroke, hypothermia, exhaustion, strains. It was illustrated with videos and some related pictures, probably pinched off the internet.

The last section of the slides was blisters.

It contained a title and a single picture of bloodied feet, emblazoned with the words: “Do Ten Tors, Ten Tors is FUN!”. I looked long and hard at that picture. There was something odd about it.

And then I dawned upon me.

I recognise those feet…

Sadly, I was a little too shy to announce that those were definitely my feet on the slide in front of us. I really wanted to know where the picture had come from because, heck, I didn’t even know what I’d done with that photo – let alone how it’d appeared in front of me almost a decade later.

It was all a bit too weird.

But I figured I’d save embarrassment and do a quick investigation. Back home, a quick flick onto Google and I was typing in  what I could only guess the presentation-maker had popped into Google Images:

And there it was. Hit number three.

The picture had, somehow, ended up on a blog. In case I’ve disappeared from the worlwide fame of Google Images by the time you read this, here’s the site it’s on:

Part of me was touched.

A large part of me was very confused.

And a small part was slightly irritated that there was no reference to where the picture had come from at all. No accreditation. Nada.

But the text beside the picture: “Look after your feet. You don’t want this sort of fun.”

That made my 15 year old self smile with pride.

A joke picture posted for friends had somehow travelled its way through the secret tunnels of the internet and come back to haunt me.

But could I find the original version of the picture and prove it was actually mine to begin with. Well… not a first. I’ve changed an operating system since then (kind of want to say computer but guys, I’m still on the laptop I got in Year 9) and lost archived files.

And then, I found it.

The blisters aren’t even vaguely as bad as the ones I got years later. There was just a lot of blood. I remember getting these during two days of trudging through very damp bog. I could feel that my feet were bleeding, but my socks and my boots were absolutely soaked. There didn’t seem like any point in stopping. Better to just get on and do it.

Pain is temporary, glory is eternal.

As they say. Or perhaps it should be: pain is temporary, slightly masochistic pictures linger on the internet.

Either way, if there was anything I was going to get remotely near internet famous for, blistered feet is really not a bad one. In my book anyway.

This post is dedicated to the 2000 or so teenagers who completed Ten Tors last weekend. The routes have changed since I did it. The rules have changed. The people have changed. But the fundamental, prove your worth and pit yourself against whatever the odds attitude hasn’t died yet.

The medal will sit on your bedroom shelf, but the training will stick with you forever.

Even if that’s in the form of scarred and calloused feet.

P.S. If you were wondering how you treat blisters, according to the first aid presentation? Man pills 😉

Why the Slow Ways are so Important