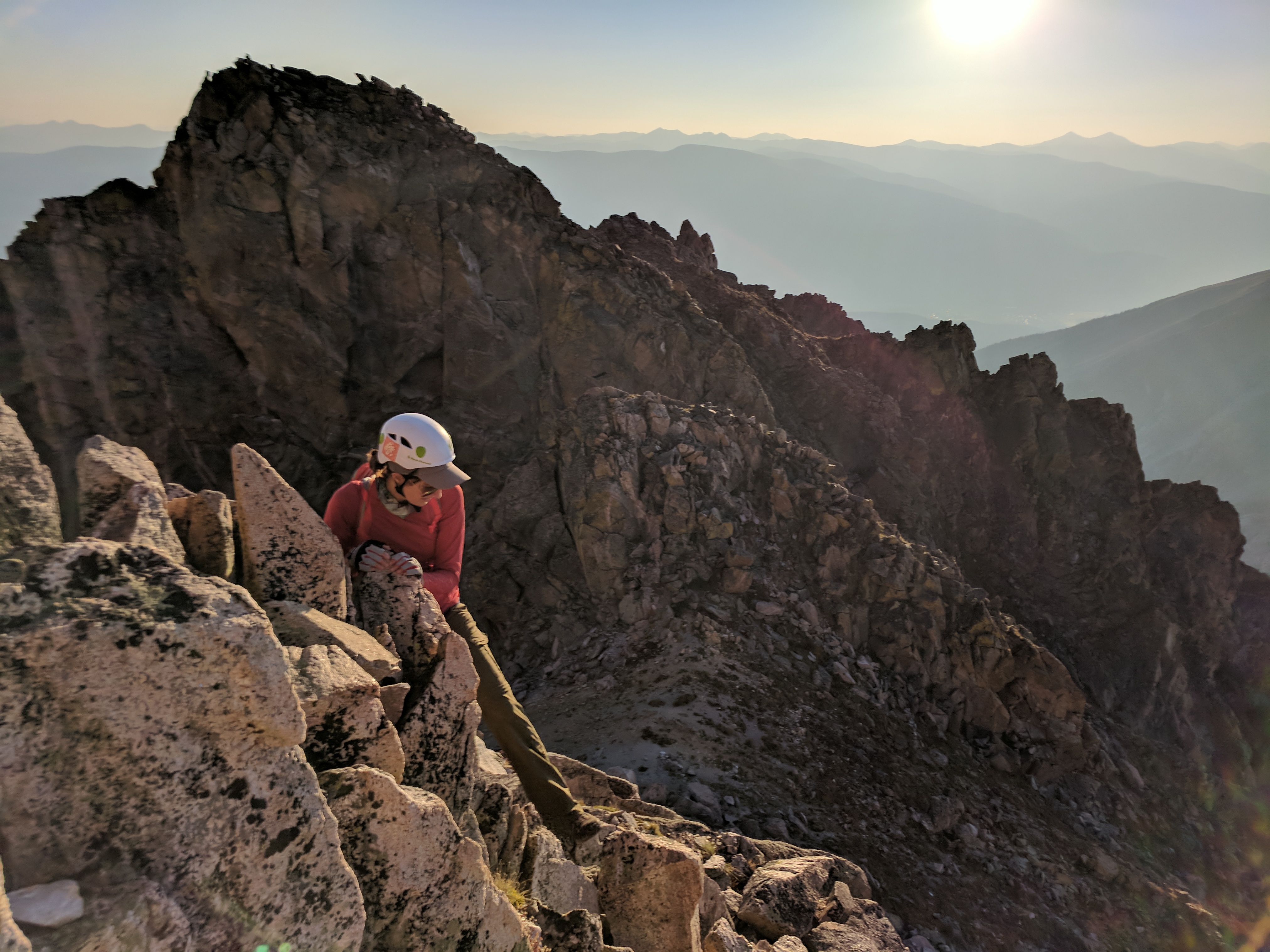 In a world where the ego reigns supreme and life’s accomplishments are measured by how many boxes you’ve put a check mark next to, it’s easy to get trapped into believing you fail if you don’t set out to achieve your goals. However, the mountains don’t care about how many peaks you’ve bagged, or boxes you’ve checked. In the mountains, the growth is in the journey.

Learn to Succeed in the Journey

I’m in my zone, completely devoid of outside distractions. All that’s here is woman and mountain. One breath, one step. Cresting in front of me is the summit. If I put my arms out I can almost touch it. One last 100 foot push up the steeps and I’m there.

I take a rest and look at my watch. Reality sets in. The drop-dead summit time is 15 minutes away and judging from the conditions I know it’s over. She’s right there, just out of reach teasing me like a carrot on a stick. A full 6 hours of picking my way through snow, rock and ice, only to be let down 100 feet from the end goal.

I sigh as I plop myself down on a nearby rock. I’ve reached my summit, and I’m soaking up every little success I’ve had to get here.

I successfully navigated complicated avalanche terrain. Endured well below freezing temperatures. Ascended a lengthy, steep ridge in deep snow. All on my first winter ascent of a 13,000 foot peak. The sun was shining and the wind was non-existent. I would call that a successful day.

From a glance, this outing looks like a failure, but here’s the thing: the summit doesn’t equal success. In everyday life, we are taught that when we don’t reach the goal we set out to achieve, we fail. In the outdoors, if you don’t make it home, you fail. The rest is just learning. That simple.

Somewhere along the route we had made a wrong turn. In an attempt to get back on route, my climbing partner, Kristen, and I pick our way through a rocky gully littered with patches of hail. Neither one of us has traction, but the hail was easy to kick steps in and we feel secure. Needless to say, the unexpected setback meant progress is slow. To make matters worse, I have an obligation that evening and time is ticking. After turning around when our first attempt to get back on route didn’t work, I know we have a choice to make.

Panting, I stutter, “Well, we can turn around and go toward the easier route, just over there, and make it to the summit. Or, we can backtrack to the next gully and see if we can climb that one to get back on the more difficult route, but not make it to the top.”

The choice is obvious. Go back and find a way to the tougher route. The one we set out to try. We find a way back to the route and attack the class 4 crux wall with smiles on our faces. Whoops and shouts echo across the valley and we crest the top of the false summit. Sacrificing that summit made for one of my favourite days in the mountains.

I successfully navigated my way through class 4 terrain to get us back on track, then tackled my first officially ranked class 4 route on a mountain. That day I learned that I am capable of rectifying a less-than-ideal situation. I didn’t give a damn about the summit.

Not Reaching the Goal, Doesn’t Mean You Aren’t Growing

I look precariously at the 70+ foot wall in front of me and gulp. I had never climbed something so high. In fact, I had been climbing routes well above my ability all day. My arms ache in protest while my mind races with all the different ways I could fall to my death, despite the ropes. However, despite my trepidation, the voice inside my head began to roar. It’s time to climb. Get up that wall. You are capable.

Up I went, as I creep higher and higher I begin to shake. My legs tremor and my arms struggle to grasp the rock. My fingers burn like they have been licked by flame. “Take!” I shout to my belayer. The slack quickly gave way and my body slumps into the harness like a sack of potatoes.

I sit ungracefully, clutching the rope. My body is simply spent. When I climb vertical rock I rarely look down and I certainly never look outwards. Heights terrify me. Suddenly, I force myself to look outward. Soon my gaze turns downward and I realise that I had climbed higher than I had ever been before. My friends look like neon ants chirping words of encouragement below.

The entire scene causes me to smile widely. I know I don’t have the strength to finish the climb, but I accomplished something beyond my imagination that day. I conquered my fear. Ever since that climb I’ve been a little less scared of exposure, and a little more confident in my ability to push my mental boundaries.

In the Wild, There’s No Such Thing as Failure

Our culture and society focuses on goals, we often forget about the growth in the journey to reach them. In the wild, we realise that the goal isn’t the top, the fastest, the biggest, the best. The journey becomes the goal. Goals are reached in moments of perceived failure. By letting go of the end, we understand the result. So, go forth. Don’t reach the summit. Don’t top out. Don’t run the fastest. See what you are really made of.

Meg is a full time freelance writer, adventure traveller, outdoor enthusiast and she-mountaineer. She’s passionate about encouraging others to get outside and have an adventure. She’d rather be dirty than done up. For more about Meg check out her website at www.foxintheforest.net

What You Need to Know to Go on a Volcano Adventure