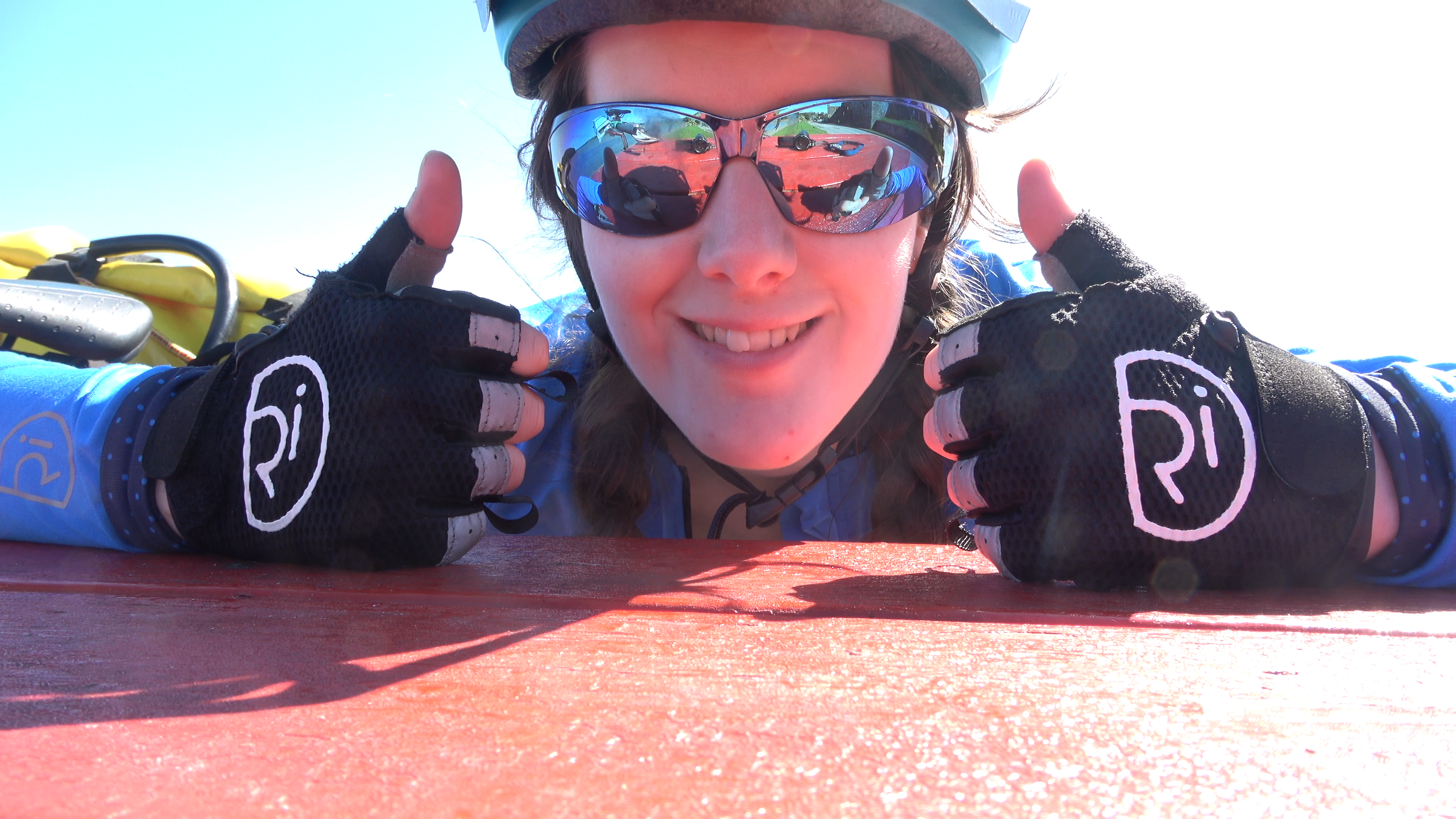 It is always scary putting your opinion out on the internet. Particularly when you know it’s something that’s not 100% in line with a lot of other opinions out there.

Last week, Alastair Humphreys shared a post I wrote about gender barriers in the outdoors. The comments erupted. Then Dave Cornthwaite shared it too… and out came more negative comments. Who knows who else might have shared it by the time I can publish this. I hope that they shared it originally because they saw the positivity in what I was saying. Not to shame me or to have an easy way to boost their average post engagement…

Since there have been so many comments, I thought it would be better to write a follow up post. I’m going to try to address the main points all in one go, without being drawn into Twitter arguments.

You do not have to agree with me. I am not asking you to agree with me. But it made me sad how so many people missed the positive side of what I was saying. I guess I didn’t explain very well. Please at least read this to try to understand.

I should also say that I was talking completely about the UK. Even I can “see outside my bubble” far enough to know that other countries and cultures have it differently.

1. What is a gender barrier?

When I talk about barriers, I’m talking about things that are imposed by other people that physically prevent you from doing or going somewhere.

So, a gender barrier is something imposed by other people that stops you from doing something simply because of your gender. For example, not being allowed to vote was a barrier for women trying to aid political change, before women’s suffrage.

This is distinct and different to hurdles or obstacles. A barrier is put in place by others that you cannot get through by yourself. It is out of your control. An obstacle is something that you can overcome yourself, without needing to persuade anyone else to remove it.

For example, if you are locked out of a building, you need to persuade the people inside to let you in. But if you’ve accidentally lost your key, you can go and get another one cut or find the spare, or climb in through a window, or….

Does that make sense? Barriers require other people’s permission to pass. Obstacles can be overcome by an individual.

Hopefully my explanation above helps deal with the confusion about barriers. I am not saying at all that people don’t experience obstacles relating to their health, wealth, gender – or whatever. Everyone is going to have their own, personal obstacles to overcome. But they can be overcome without permission from anyone else.

Just like Francesca has overcome her own personal adversities and then writes about it, to help encourage others to do the same. Brilliant.

It makes me sad how this, and many far less measured comments, have characterised me as a spoilt little thing who can’t understand how other people can be facing difficulties. Please, know that of course I can imagine it and am extremely grateful for the things I have. Know also that I was not delivered life on a silver plate. I may choose not to tell the internet everything about my personal life, but that’s not because it’s all rosy and golden.

What I have done is be tenacious, persistent and determined. If I come across an obstacle, I find a way around it. I am still fighting some of these, but I believe I will find a way. They make life more difficult, but I won’t let them stop me.

This is why they’re obstacles, not barriers. I don’t need anyone’s permission to try, but my own.

Note: I appreciate people may not agree with me on this attitude. But it’s something I live my life by. Any time it’s tempting to make an excuse or say “I can’t” instead I force myself to ask “How?”. How can I make this happen?

I genuinely believe that there are no gender barriers any more in the outdoors. Call me naive, stupid, fanciful, optimistic – I do believe it. You do not get arrested for walking in the mountains as a woman. Outdoors employers do not immediately reject your application when they discover you’re female.

I do not deny that this was a feature of the past. But that past is over. It might not always be a walk in the park, but it is possible. The barriers are down, only obstacles are left.

If anything, employers are striving harder than ever to find a balance of genders. They are encouraging female applicants if there are too few. They are seeking out female speakers, instructors, role models… to try to create balance. This is great.

This is not an ostrich approach. Here’s why:

The reason I believe we should stop talking about barriers is that it negates the progress we’ve made. There are generations of girls and young women who look at campaigns like This Girl Can and find them patronising. They look at them and say, “Duh, of course I can.”

This is exactly the world that these campaigns were trying to achieve.

So what I’m saying is it’s time to shift our gears. Stop trying to make the outdoors accept women and start focusing on providing role models for these young women and girls. The outdoors has almost completely taken down its barriers to entry for women. All that’s required now is to make it ‘normal’.

The problem with continuing to beat the gender barriers drum is that these same girls who think, “Duh, of course I can” will start doubting.

“Maybe I was wrong…”

And we’re back in that cycle. To use the analogy of a satellite, we are at an escape point. We risk getting caught in the same orbit again and again. But if we can only switch our messaging to Of Course She Can – from This Girl Can to This Girl Does, I believe we’ll never go back.

One of the biggest objections in the comments was that I “ignored a large body of research” about gender barriers. I’ve copied one of the examples cited below – a recent piece of research put into a handy infographic by Outward Bound.

We all know that we don’t have equality of numbers in the outdoors in these areas. I am not saying that there are equal numbers. I don’t think that anyone is. This sort of research is one of the reasons why all of the barriers have come down over the years.

At the risk of people criticising me again for giving a personal example, I have seen this imbalance for myself as an outdoor leader. There was 1 other girl on my ML assessment of 8 people. There were rarely more than 3 female walk leaders in my university club – out of max 15. In my Mountain Rescue team there are about 15 of us out of almost 50.

This is not because anyone is stopping them physically from being there (barriers). Clearly not, because women are there, even if they are few. What is required now, is time and positivity for the balance to be attained.

So, going back to the research, I would argue that this says nothing about gender barriers. It states that fewer women than other genders have outdoor qualifications at the time the survey was conducted. That is all.

A far more useful set of statistics would be the rate of change of these numbers. Compare the female qualification holders 5 years ago to today. Are we making progress? If the numbers are going down year on year, we can conclude that something’s going wrong. Otherwise, thumbs up!

P.S. For more about misleading use of statistics, I’d highly recommend this book and website by a reputed statistician. It’s called Factfulness, defined as “The stress-reducing habit of only carrying opinions for which you have strong supporting facts”.

The one thing that I haven’t addressed yet is attitude. The way people treat women in the outdoors.

Again, feel free to call me naive etc, but I believe most people in the outdoors treat women as equals in the outdoors. Sure, there are exceptions. And not all of them are men.

Have a read of the extract below, kindly shared on Twitter.

The theme of having to justify your ability came up several times in the comments I saw. Although the majority of people are decent, as written above, some aren’t. Sadly, this is the case across everything in life.

Like many, I have experienced outdoor group members not listening to me. In at least one case I’m sure it was because I was young and being female didn’t help. Yes, I’ve also had someone ask me if I was lost because I was looking at a map. These are just a couple of examples.

Yes, we should not have to feel like we need to justify our abilities all the time. I believe that in time we won’t have to. The longer the barriers are down, the more it will become completely normal for women to be in the outdoors. The Of Course She Can generations will outweigh the Women’s Place Is In The Kitchen generations.

In the meantime, I strongly feel that we should be sharing stories of women in the outdoors. I feel strongly enough about it to have started a magazine dedicated to it. (Of course, it should go without saying that these views stated here are mine alone. Intrepid Magazine is stories, advice and journeys of adventurous women, typically written in first person by these women – cover to cover.)

The more we share these stories, the more people will realise how archaic their views about women are. I don’t feel like this is having to prove our worth. It feels more like sharing and celebrating our successes so far. These stories will in turn create more momentum and take us into a more positive future.

I hope that helped!

Hopefully that cleared up some of the discussion/confusion/upset about my last article. Like I said before, this is born entirely from a place of positivity. I’m hopeful and excited for the future.

I also never intend to make people angry or upset with any of my writing. There is enough of that sort of stuff out on the internet. If you’re still feeling disgruntled – I’m sorry. I guess we’ll just have to agree to disagree. But that’s not a bad thing. If everyone agreed on everything then the world would be a pretty boring place.

Thanks very much for reading this far.

There’s No Such Thing as Failure: 3 Short Stories About Progress in the Wild