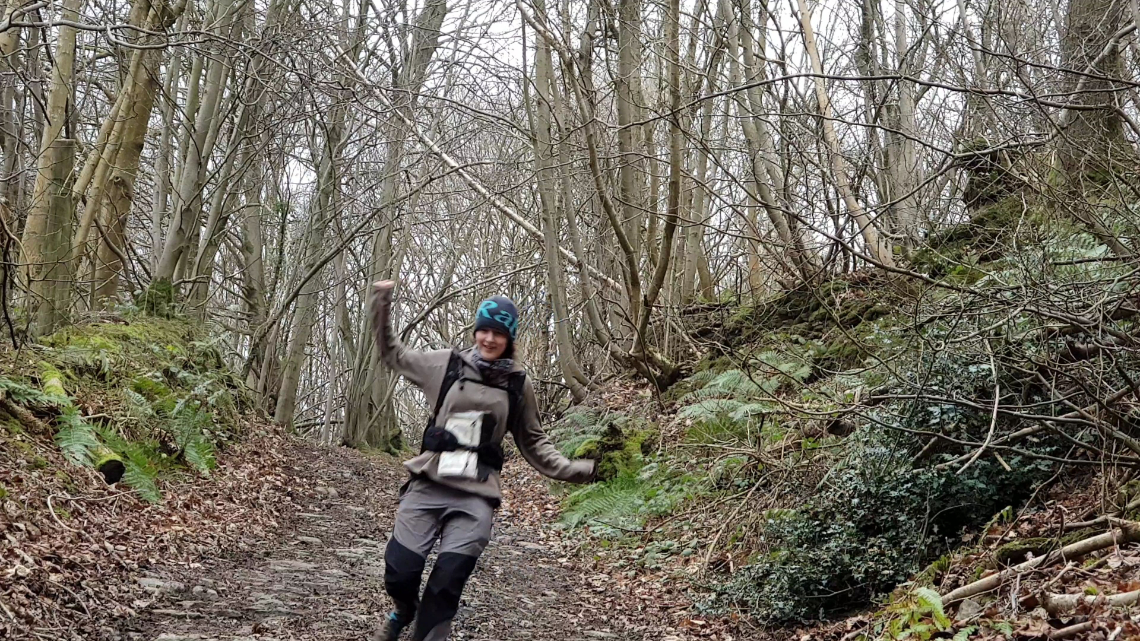 Long time readers will know that I have a funny relationship with running. Like the classic teenage relationship status: it’s complicated. Whether that’s trying to trick myself into going for a run or running five miles home from work. I flip wildly between going for it and thinking I’ll never be a runner. And it’s taken me a long while to work out what’s causing this behaviour.

Because, let be honest, I love the idea of being an ultra runner. I want to be soaring along gnarly ridgelines or tackling multiday expedition races. And I look at the average and cut off times on long events and think – couldn’t you just walk that? Sure, this may be a combination of having a body built for fast walking and a healthy dose of naivety, but it does puzzle me. I look at fastpacking and think, isn’t that just going for a walk? I mean, doesn’t everyone run down the hills in boots?

But on the other hand, I haven’t considered myself a runner since primary school. I made the mistake of actually trying in the school fun run, accidentally qualified for the cross country team and did surprisingly well. At secondary school I was always entered in for the 1200m at sports day, because no one wanted to do it and I was the mad person who would keep going. But I identified so strongly with walking – and fast walking at that – I never wanted to be that person in leggings and trainers without a backpack.

Honestly, I still don’t want to be that person. I just want to go further faster. And, actually, I think I’m missing that competitive event atmosphere that Ten Tors used to provide. I want the challenge to be set and to struggle against it. I want the chance to succeed where others fail. And there aren’t any adult walking challenges with that same competitive atmosphere. So I look to ultra running, and occasionally adventure racing, and wonder.

Recently, we did an orienteering challenge for a post-Christmas get together. A score course in the dark, with points deducted for every minute after 90 you were late. I’ve orienteered before and, although the maps bend my brain, it’s good fun. There is enough nav and treasure hunt to distract me from the fact I’m running. Charging around the moors looking for glow sticks = fun. Running without treasure = bad.

At the very end, we had to run about a kilometre along the flat to get back to the start point in time. We were quite close to the 90min cut off. My world collapsed into the heartbeat thumping in my ears, heavy breathing and thudding feet. I didn’t want to be the reason we were late and lost points.

We got back with two minutes to spare.

“You did fine,” said my runner friend.

And I was so struck by the truth in what I’d just said. It’s not that I can’t run and keep up. It’s that I feel awful doing it. Everything about it makes me want to walk instead. So my main aim as a person who runs now is going to be not feeling dreadful when running on the flat.

Where Running and I last left off

I feel like I have written this at least twice already. But, since I can’t find it in my notes or any of my WordPress drafts, here it is again… The most recent time I gave up on running was around about the start of 2020, which is somehow nearly two years ago to date. I did the thing, like everyone else, and gave running another shot in around February/March time. I feel like this was just before all the lockdowns happened and was inspired more by having just moved into my own house. But then, just like everyone else, when I was told I was only allowed to leave the house once a day for exercise, then damn right was I going to make sure I left the house every day for exercise.

So I kept doing this. I would run the same, rather hilly route several times a week. I’d recently read The Uphill Athlete (I may be getting the chronology wrong, but I think that’s true) and so was making sure that I ran at a pace that I could keep up a conversation at. So basically, really slowly. And I did that for a while… it would take me about half an hour to get up to my turnaround point and then a little less to get back. I was being fairly vague about it, seeing how far I could get and how consistent I was. And then, I made a critical mistake.

One day, I wondered how far I was actually running. So, I went onto komoot and measured it. I can’t remember how far it was, but what I do remember is that its ‘calculate your timings’ function promptly told me how long it should take. My default is set to hiking on the top end of the slider (pro or whatever they call it). And it was less than the time it was taking me to run it.

Now usually I take fancy tech with a pinch of salt, but I know I regularly meet or beat that timings calculator. Walking. With a rucksack. So I was instantly so demoralised that I stopped running the route. What was the point? I could literally walk it faster. How is that even possible?

Did I ever start running again?

Then there has been a wiggly floundery sort of stage. I recovered from my disappointment enough to keep going. In fact, a friend persuaded me to have another shot. Then I ran downhill into some hedges, forgetting that the bushes were covering a ditch, as I turned the corner. I was going too fast, couldn’t recover and – although I didn’t deck it one – I ended up badly spraining my ankle. It could possibly have been a break but the x-ray guy was on holiday and although it was borderline they thought I’d probably be alright. It feels fine now, so I guess it was. Incidentally, the friend had persuaded me on the way home from a callout to a lady with a broken ankle. Ah life, you have such a sense of humour.

So I had to stop while the swelling went down and all that. And then, I’m a bit hazy about 2021, but definitely did spend some time thinking about going for a run. I possibly nearly did – oh I was meant to go and run the Dartmoor north to south with friends (that was 2021, right?) but then was ill. And then I had other stuff to deal with and then the house saga started kicking off. So basically, I haven’t done any running for like over a year…

Until, I went on the RGS Offsite Safety Course and stayed with Alex, of Rhine Source2Sea. She took me on the local London hash and I survived it. I’ll tell you all about it when I write the post about the OSSC but I was very surprised to discover that hashing isn’t just a weird Devon cough-drinking-club I mean, running club. In fact, people do it worldwide.

My Next Steps… (Pun not intended)

This year I am not a runner. But I am going to be a person who runs. And to do that, I’m going to need to give myself as much of a chance to do running as possible. So I’m telling people that running is a thing I do now. I’m saying yes to running things that I might have deliberated about or instinctively said no to. Because I’m not a runner. I’m also going to do things like wear inappropriate footwear (read: trainers) on walks sometimes, so I can go faster if I’d like to. Not that wearing boots has ever stopped me from running down a hill.

As well as this, I’m definitely going to think about how to feel better while I’m running on the flat. That might involve going super technical and finding out the stats on what I need to improve. By that I mean the kind of nerdy numbers that smart watch owners and Strava users bandy about. You’d think I’d have a good aerobic base from all the walking I do. But maybe not. Is it a breathing rate thing or a heart rate thing, or something else? Do I need to do strength training – or rather, would being able to do a pull up or a long plank help me feel better running? I don’t know yet, but I’m going to find out.

Part of me is curious about the data. Another part of me doesn’t want to turn the act of moving into a spreadsheet. Can I do it without caring about numbers? Surely you don’t need a smart watch to simply run. Perhaps I should just start the Couch to 5k like everyone else does (my ego hasn’t quite accepted that yet). Or join a beginners’ running club (I don’t often like to run with people. That allows comparison. I’d rather run away.) But as a running person, I should probably be trying out some of these things. Open minded is key. We’ll see where I end up.

Are you a runner or a person who runs? Throw any wise words or encouragement this way!! Or come and join my adventure squad for a monthly update email from me (think a letter crossed with a catch-up over a cuppa).

How I Trick Myself into Going for a Run

I Got Off The Bus And Ran (5 Miles) Home

A Year Outside: The First Month