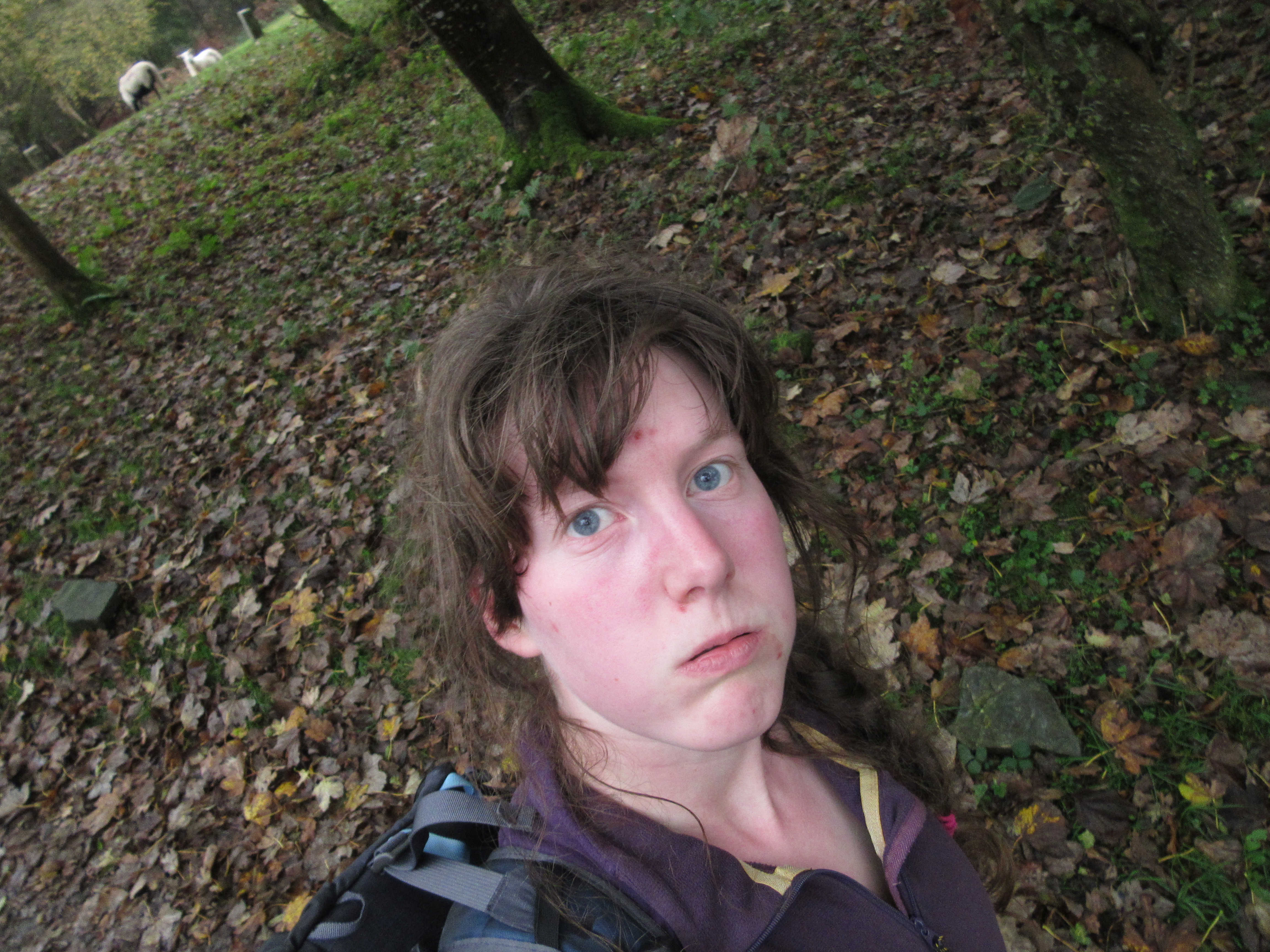 This is absolutely crazy,” I thought as I pounded down the hill from the bus stop. “I can’t believe I’m doing this.”

Crazy. In fact, I haven’t been a runner since the last year of primary school. I made the mistake of actually running in the school “fun run” and ended up on the cross country team. Oops.

After that I only ended up doing the 1500m race at sports day in secondary school because they knew I wouldn’t give up. No one else in my class could be bothered to start.

What Made Me Start Running?

Last year, I was running late. Literally running. I’d been on a call out all night (the night I wrote this post to try to keep myself awake). I’d made it to 5am, but accidentally fell asleep sometime between 6 and 6:30am, slept though my alarm and missed the bus. Damn it.

I woke up at 8 am in a confused daze, ran around the house whilst shoving breakfast into my face and tumbled down the hill to the bus stop. If my brain hadn’t been so tired, I would have probably been in panic mode. My usual bus had left 30 min before I’d woken up. I’m going to be really really late!

Luckily the latest I can get into work without getting into trouble is 10 am, not 9. The usual commuter traffic had gone, by the time I reached the usual pile-up points. You know what they say: “The late worm misses the early bird and lives to wiggle another day”!

Great! You’re thinking. Yes, it would have been – if the bus stop had been at the office. Instead, it was at the start of my half hour walk.

What else could I do? I started running.

My brain was in a very confused mess by this stage. I honestly don’t remember it that well. Except being hopelessly over dressed for running and this one fact:

I couldn’t run for more than a couple of minutes without stopping.

Imagine me, rucksack bouncing, coat flapping under my arm in a flailing run – walk – run – walk. No doubt I was bright red too.

I could not believe it. I couldn’t believe that I couldn’t just run if I wanted to. That was the start.

It’s all about the mindset

Every day I have a 30 minute walk from work to the bus stop. Every day, the bus leaves at 25 minutes past the hour.

For weeks, I was frantic. I’d leave work on the dot and power walk across town. Some days I’d make it. Others I’d have the dissatisfaction of seeing the bus pull away as I arrived. Why is a bus never running late when you want it to be!

Then I had a realisation. If I set out with the intention to run, it didn’t seem so annoying. I take a change of clothes for cycling, so why not do that for my walk/run? All of a sudden I wasn’t running for the bus in a mad panic because I was late. Instead I was running and there happened to be a bus at the end of it.

Before long, I was catching the bus more regularly than I was missing it. Then one day it was raining so hard that I didn’t want to walk. It seemed right to run. It was almost like the weather gave me permission and I ran a 1.5 miles to the bus, only stopping for traffic lights.

I got there before the bus. I was ecstatic.

I started deliberately running the whole way. Sometimes from the bus stop to work (downhill) and sometimes from work to the bus (uphill). It was only really awkward once when I ran past the MD as he walked back from a business meeting I’d also been at… I even got over the feeling that I had to stop running when I spotted someone else running on the same street.

But you know me, I just don’t stop with the boundary pushing. What can I do next? Maybe I could do a non-competitive race…

I thought about entering a local 7 mile run. What scared me most was the possibility of knowing people there – certainly the first aiders, but maybe some of the runners. I needed to know I could do it without losing face. So, I decided to extend the idea of running to and from the bus stop a little further. I’d deliberately get off the bus 5 miles early and run the rest home. If I could do it in a decent time (that wouldn’t leave me last in the 7 mile race) then I’d enter.

At this point, I finally bought some running shoes.

Equipped with my new running shoes, I left work a tad late. We’d been held up in a meeting and I really did have to run to make it to the bus in time. Five steps out of the front gate, I realised I’d forgotten something. I’d carefully brought a spare set of clothing, more appropriate for running in. Had I changed into it? Nope.

No time for that now…

I thought about the possibility of getting changed on the bus, but there was no way of doing it without losing every shred of modesty. Gone are the days of hiding in a corner behind the tall coach-seats of the school bus to get changed in time for netball training.

I got off the bus at my 5 mile stop, feeling slightly excited and slightly ridiculous at the same time. I thought about hiding in the hedges to get changed. There were just too many people around. I looked down at my fleece, cotton top, smart(ish) trousers and shiny new trainers… and started running.

“This is absolutely crazy,” I thought as I pounded down the hill from the bus stop. “I can’t believe I’m doing this.”

But there I was, brain being shaken around as I thundered out of the town and onto the bridleway towards home. On the plus side, at least my shoes had stopped hurting. I’m always a bit wary of buying shoes on the internet and I wasn’t 100% sure I’d got the right size. They’d seemed fine around the house, but I’d discovered (on the way to work) that they made my right foot hurt across the toes when I walked. Okay, so not really hurt, but it was just plain annoying.

Typical me – I’d managed to buy a pair of running shoes that it was painful to walk in. What more motivation to run could I need?

It Was Mostly Downhill

That’s what my cynical brain told me. It’s mostly downhill, you’re just using gravity. I knew the route intimately, since it was the same way I commute by bicycle. And it’s true, there is a lot of up hill. But there’s definitely a fair bit of flat and up (that, friends, is the joy of living in Devon).

I found myself struggling to have something to think about. What do people think about when they’re running? I am a compulsive thinker and my brain uses it to pass the time. I could only notice the rattling of my pacing beads (which I’d forgotten to take off the rucksack) and my ankles getting sore from the tarmac. I tried running in the mud along the edge and almost left a shoe behind in it… Maybe best to stick to hard surfaces.

On a particularly steep bit of downhill, I charged past some bewildered dog walkers, going the other way. Everyone needs a maniacal smile to brighten up their day, right?

Then I bumped into a load of sheep that looked like badgers.

In hindsight, they don’t really look like badgers, but at the time it seemed such an uncanny likeness that I stopped to stare and take a photo. I also stopped my timer, because I figured I wouldn’t be staring a sheep on the 7 mile race.

Then I took this photo and realised how hot I was and took my fleece off. It was probably about half-way. The photo sums up how I was feeling better than I can express in words!

I reached the next cattle grid and realised that I’d forgotten to re-start my stopwatch. Idiot. There goes all the timings. I’ll have to guess at how much time I’d missed.

But somehow, I just kept going… and going… until I was in the town I live in. Then it dawned on me: I still had to get to my front door. On a bicycle this is a relatively short distance. On foot, this is an embarrassing, red-faced shuffle-dash through streets and tracks full of people I might know. Correction: with the possibility of encountering someone I might know.

I was tempted to walk, just in case.

Nope, come on. Power on, almost there.

Along the canal (mind out for dog poo)…

Stop the clock! I made it. Hell flippin’ yeah.

You Don’t Need Anything Special To Start

I’d just run 5 miles home in normal clothes, without anything particularly special. Glad I had the trainers, but I was wearing a cotton top and essentially jeans, plus a walking rucksack with the lid taken off. It has nothing to do with clothing. Sure I would have been more comfortable in special kit, but I managed without.

I guess that’s what I want to say: don’t use that as an excuse. You’ve just seen that any nutter can run 5 miles if they want to enough. I spent the entire time red in the face and looking ridiculous, but – do you know what? I don’t care. Because when I finished that run, I felt absolutely great. I’d achieved something I didn’t really think I could, in a time that wouldn’t leave me last of the last in the 7 miler.

Aaaand, I’ll just leave this here to demonstrate why it’s best not to wear cotton when exercising…

How I Trick Myself into Going for a Run

How to Build a Home Drying Room for Outdoor Gear

How I Survived Living In A Field For 2 Weeks