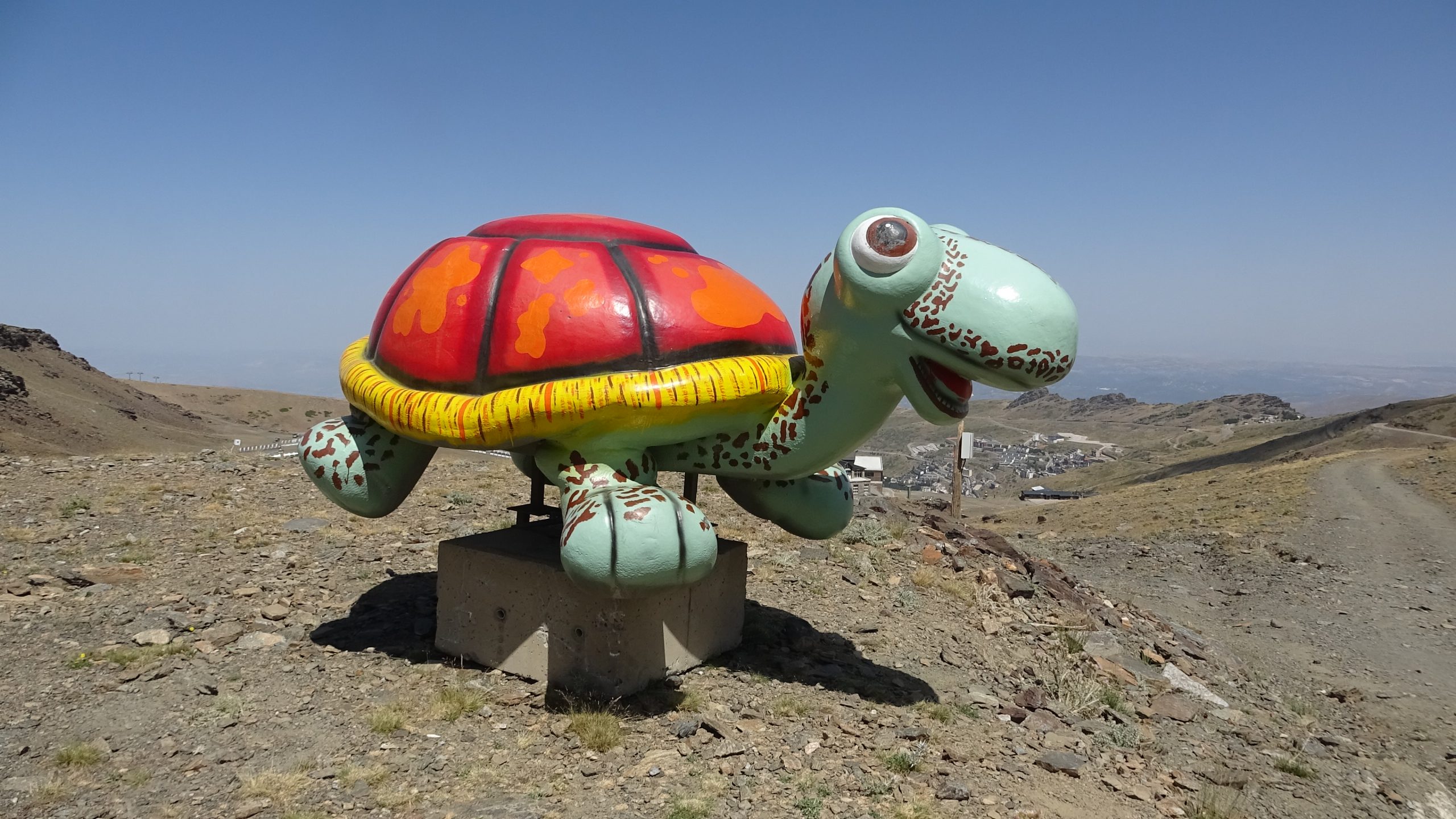 Well I did it! Guinness World Records have verified that my Spanish 3000s expedition was a success and I’m officially a world record holder! 😀

I told the internet and it got the most reactions out of anything I’ve every shared. Thanks everyone!

So, I’m going to try to answer some of the most common questions here.

(If you’re wondering: what is that tortoise about?! He’s part of an out of season kids ski run that I had to walk across.)

I successfully climbed 13 peaks over 3000m for the record. I had hoped to do 25, but realised this would be impossible due to heat wave and lack of water. This dropped to a more manageable goal of 15 on my first day’s walking. You can read about why I only made 13 of them in On Top: Spanish 3000s Story Part 4 and Enough: Spanish 3000s Story Part 5.

Only 13 peaks, even if they are above 3000m, doesn’t sound like that much to anyone who’s done a lot in the mountains. Particularly anyone who’s done a great high-level traverse that takes in several peaks in a day. I’ll be honest: that was my initial reaction when I saw the current record was 7. “I can definitely beat that,” I thought. But of course GWRs aren’t designed to be easy. There is a minimum vertical ascent stipulation in the record rules. So much that I spent a vast amount of time walking off the sides of mountains into valleys and then back up onto the peaks again. You don’t have to go all the way to sea level, but it’s pretty damn significant.

How do you get a GWR verified?

I’ve had a few questions about the details of this, so I’ll probably do a full post on that in the future. The short answer is: you record a bucket load of evidence of your attempt, as listed in the record guidelines. It’s not a phrase they used, but in scientific terms, you’re trying to prove “beyond reasonable doubt” that you did this record.

If you’re even slightly curious about a record, I’d highly recommend apply to attempt it way in advance of starting. It takes weeks and weeks for GWR to reply to messages and progress each step of the process. You can get it verified post-record if you have enough evidence, but best be sure and start the process early.

Will you be in the book?

Honestly, I’m not sure. I had to submit loads of photos as part of my evidence, so I guess there’s a chance I could be. But I feel like GWR would have told me if I was – and they haven’t said anything. It’s already in print so I guess I could go flick through one and find out, when such luxuries as book shops are open again.

You can see a list of everything I took here: Spanish 3000s Kit List (1 week summer mountaineering).

If you’re interested in kit I use more generally and why, I wrote about that recently: The Camping Kit I Actually Use and Why.

Did you have a support team?

No. I completed the challenge solo and unsupported, which means I carried everything I needed for the duration of the week (except refilling water from streams – and once an insalubrious puddle).

I had transport help getting me to the start and back to civilisation afterwards. But otherwise it was just me and the mountains. In fact, I spent the first few days almost without seeing anyone – except as a spot in the distance.

Organising these sorts of challenges is actually easier than you think, as long as you have a good framework and system to your adventure planning. Particularly one that is able to adapt and change as you approach your Adventure Launch date.

How did you navigate?

Many people will know that I’m a complete technophobe when it comes to the mountains. I had a GPS tracker but I have absolutely no idea how to use a GPS to navigate. (Bucking the trend for 20-somethings, I imagine!) I navigated using a 1:25k paper map of the area. I had a compass, but I only used it once.

Tell us funny stories that you missed off the blogs

There were quite a few. For example, on day 1 my pack of chocolate coated hobnobs melted together and would refreeze overnight. I tried to eat it as a single stack but gnawing away at the edges wasn’t very successful. In the end I just had to accept I could only eat hobnobs in the afternoon.

The spark on my stove was only working intermittently and eventually stopped working altogether. As I wasn’t allowed to take a lighter or matches on the plane, this meant cold dehydrated meals some nights. This was bearable until the last night when I had to eat cold apple-porridge for dinner. I didn’t quite manage it, despite being very hungry. (It should have been a main meal packet but I’d accidentally packed a breakfast.)

There were also some very funny local encounters. Once when someone shouted something about sombrero at me and I thought they were talking about a hat. Sheltering from an impending thunderstorm in a bothy on the last night, I met a trio of old Spanish blokes. I spent some time trying to talk with one of them in Spanish-English-Charades. It took me a good 5 minutes to guess the mime for carpet. I’m fairly sure he told me that the best thing about England was the carpets.

What were the best and worst bits?

There were some absolutely stunning mornings. I love the feeling of being completely alone in the mountains with an amazing view. Also the more gentle scrambles were great fun – anything too steep became hard with the cumbersome backpack. Morning ascents in the cooler air were lovely too. Oh and remembering that I’d packed cashew nuts.

The lows were probably my first night’s camping – or in fact the whole first day slogging up the valley wondering what the hell I’d got myself in for. Then thinking my tracking wasn’t working right and it might have all been wasted. The navigational mistake and some of the moments on the penultimate day too. Although, really my overwhelming memory of “worst” is just slowly plodding up a steep hillside with a very heavy backpack in extreme heat. Towards the end my sunglasses were so dirty I had to take them off to see properly and I was sweating off my waterproof suncream.

The heat and lack of water were obviously big challenges. I’d anticipated them, but not to that extent. I essentially had to completely redo the route around having enough water for each day. But by far the biggest unexpected challenge was the language barrier. I had naively assumed that Spanish people could probably speak a bit of English. Out of the few people I met, far more spoke no English than a little. So I would really like to thank my GCSE Spanish teacher for doing such a good job that I could remember some of it a decade later. Thanks Señor Medd!

Will you be writing a book about it?

Not just about this challenge on its own. However, it would form a part of a book I’m scoping out in my head at the moment, taking place over several years and challenges. But I don’t think it’s got enough on its own to form a full narrative. After all, I met almost no one and spent a lot of the time walking up or downhill in glorious sunshine.

As ever, if you’ve got any other questions, do drop them in the comments below!