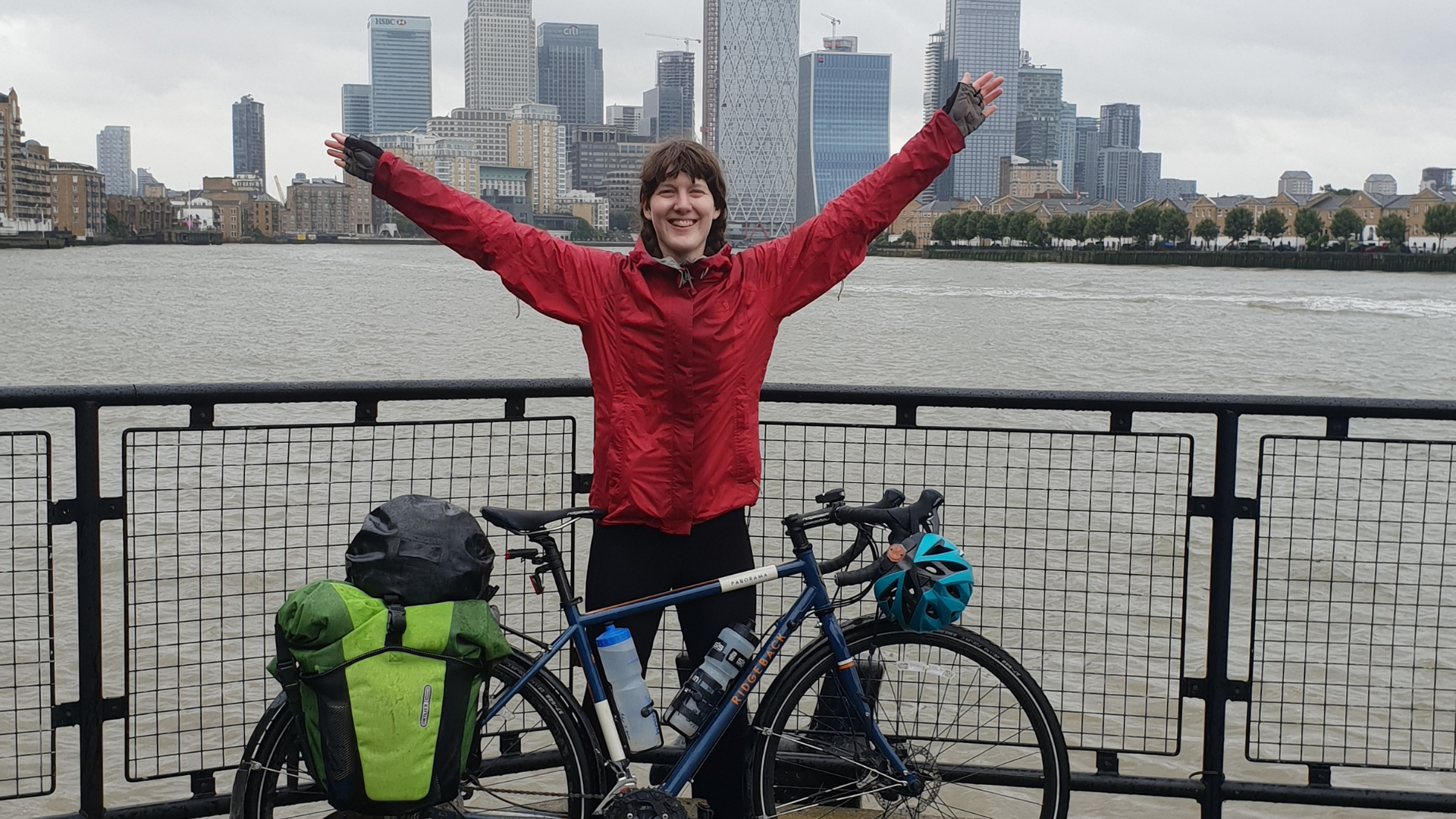 The Ridgeback Panorama describes itself as “ready for any adventure you have in mind”. Bold claim. An out the box adventure touring bike was exactly what I needed. We flew to Switzerland together and cycled home to the UK. This review is based off some 1700km on EuroVelo 15 and roads and Sustrans routes in the south of England.

Bicycles are a very personal thing. Everyone wants something different from them – whether it’s for throwing yourself downhill at speed, or making it to work in the morning. For me, the key element of a bike is survival. I want to be able to take it – or specifically for it to take me – wherever I need to go. That applies to my attitude about most kit actually. I need to be able to trust it to survive a lot of wear and tear, without having to worry about it breaking or falling apart.

I have a Ridgeback Speed for commuting to work. It has done years of 40 mile days and put up with being left out in the sea air during office hours. That bike is a work horse. But I felt like it wouldn’t make it to Switzerland to start the Rhine Source to Sea cycle. To be completely honest, I doubted I could get it back together again if I dismantled it.

In terms of touring experience, this was my sixth or seventh bike tour. My family toured as family holidays, so I’ve been in this game a long while!

First up, let’s introduce you to the general features of the bike. Then we can go into detail about what’s probably important to you and how it performed.

You can get all the tech specs from the Ridgeback Panorama official page, but for the less geeky version, here’s what you get:

With the exception of needing pedals, you really can take this bike on an adventure straight out of the box. Coming equipped with a pannier rack, mud guards, bottle holders and a decent set of tyres really helps!

You can see from the pictures that I did change the setup a little. The third bottle holder fits underneath the frame, just in front of the bottom bracket. There’s not a lot of space between frame, pedals and mudguard so I took it out. I also tend to pick the bike up with my hand exactly in that spot, when it’s not fully loaded.

Otherwise, the only major difference is the pedals. I tour in flats with toe clips so I don’t have to clack my way around off bike! I took the bell and front reflector off to make some room on the handlebars.

When I started the ride, this bike was almost brand new. Short of a test ride to set it up, I was pretty much picking it up off the shelf and taking it on a tour. So I thought it might be fun to go through what I broke first. In general it held up incredibly well.

Frame scratches: on one miserable day I propped the bike up on a painted pole, so I could hide out of the rain. When I turned back around again it was on the floor. There’s a small scratch on the frame that’s either whatever’s underneath the blue coat or the paint from the pole!

Seat rubbing: this is 100% my negligence. I packaged the bike up in a cardboard box for my flight to Switzerland. I was skimping on luggage, so I put my tent and some other bits into the box with the bike. On the way to the airport I discovered I could barely lift the thing! So I did a lot of dragging the bike box across various airports. As I was unpacking the bike at 3:30am in Geneva (long story), I discovered that my bubble wrap had moved and I’d rubbed a hole through the box and was wearing away the saddle instead. Ooops. Incredibly, it was barely noticeable. (Back right corner of saddle)

A Bit of Noise: the Ridgeback Panorama cycled silently for about 3 days, which was lovely while it lasted. On day 4 (after a lot of rain and some mud) it developed a tick/knock/creak on the pedal stroke. I couldn’t find a cause, so other than driving me a little bit crazy on flat miserable days, it didn’t appear to cause problems.

Of course, I also managed to cover the bike in equal measures of mud, rain and suncream. I did also curiously manage to stop the freewheel from spinning – quite possibly whilst manoeuvring it into Great Western’s tiny bike spaces – by knocking the plastic disc guard out of place on the back wheel. Easily fixed once I’d worked out the problem!

Let’s start with the most pedantic, but the thing that most touring cyclists really care about: bottle holders. Can they fit a 1 litre bottle? Yes… but only just on the upright holder. On the one I took off, the bottle touched the mud guard and I didn’t really fancy drinking from that. Another reason to take it off! You could frame mount a pump in that space, but it might get covered in mud, so not ideal.

The mud guards are probably the least sturdy feature of the whole bike. The do the job and are very light, but it would be quite easy to crack them with a bit of force. Still they are well made and curve right over the back wheel. You might not care too much about this, but the person riding behind you will! It also stops your rack pack from getting covered in mud daily.

Quick release wheels are a wonderful addition to a touring bike. If you’re touring from your front door, round the world and back, then they’re not so important. But if you have to transport your bike at all – particularly flying – it makes a huge difference to ease of transport. Plus you don’t have to carry a huge spanner.

Just generally, everything about the make is very solid. It feels like it’s a bike built to last. And, I know this is really sad, but I loved the little “Explore the World” detail on the frame. It’s like getting a discrete tattoo that you don’t see all the time, but makes you smile when you spot it.

Obviously, you would not want to take this bike on a downhill trail or gravel route. I will therefore take the “any adventure you have in mind” marketing copy with a pinch of salt! As a ready-for-anything touring bike, it did very well. I’m certainly pleased with its performance.

What it did well

I’d never ridden on drop handlebars before, but took to them well. I honestly don’t know what the fuss is about, but it’s nice to have a choice of hand positions. Particularly on long, straight, flat canal paths. I did get a numb little finger from riding and I know that finger numbness can be a sign of over-extension or bad bike fit. There might be something in it, or it could just be coincidental.I was squarely in between the Small and Medium frame size, so chose the Small to be safe. It’s a unisex bike and I can’t imagine myself really being a Medium!

The steering is very light, so it took me a while before I could multi-task whilst cycling (don’t do this at home kids!). For example, getting a bottle out or food, or taking a quick video.

What most impressed me what that it took any terrain we cycled over in its stride. As anyone who’s taken a EuroVelo route from start to finish will know, not all international bike paths are made equal. You can be on beautiful smooth tarmac one minute and wobbling down muddy forest trails the next. Although the Panorama doesn’t have suspension, it dealt very well with a huge variety of terrain: miles of cobbles, grit, dirt, tree roots and tarmac on a scale from pristine to atrocious. The only thing it really didn’t like was deep mud, but that was an accident anyway.

It was a relief to know that I had Schwable Marathon tyres, because I trust those tyres. They are a well reputed and durable brand designed for touring. A bit of weird terrain and a significant weight load will not phase them.

Having disc brakes on tour is a game changer. As someone coming from a bike with slightly dodgy rim brakes, having front and back discs was a wonderful experience. There’s nothing quite like charging down hairpin bends on Swiss alpine passes and knowing that, even if it’s lashing it down with rain, your brakes will still stop the bike.

What could have been better

The gearing is quite high for a “round the world” bike. For example, I found the bike was always pushing to be in a higher ring on the front earlier than I was expecting. Maybe that’s just me overpacking – or not having quads to match my packing! But I wanted to click up at least one more on the back, but was being forced from 2 into 3 on the front to stop rubbing. It rides very well unladen, but given the average round the world tourer would have much more weight on the bike than I did, it seemed a bit odd. Same, to be honest, that it doesn’t come with the option for a front pannier rack.

On the same vein with the gearing, bottom gear is also quite high for a round the world tourer. The hills in Switzerland can be quite savage, but nowhere near as savage as I imagine, say, South America would be. Or, for that matter, some of the 25% monsters in Devon. As way of comparison, my friend’s bike was a standard secondhand city bike. I would be having to overtake her on the uphills simply to be able to keep moving, while we were both in our respective bottom gears.

The only other tiny thing is the bottle space, as mentioned before. Bring the bottle holders down half an inch even and it would make it much easier to get a big litre bottle in and out.

Overall, I would recommend this bike to people looking for a solid all-round touring bicycle that comes with pretty much everything you need to go on an adventure, straight out the box.

I was given this bike by Ridgeback to ride along the Rhine. Part of the deal was that I reviewed the bike. BUT I am not obliged to give it a good review. This and all my reviews follow the Alex Test. Alex is my friend and I we have known each other for most of our lives. We’re pretty damn honest with eachother. So when I write reviews I consider: would I say the same thing to Alex? If the answer’s not yes, then I get rewriting.

So yes, I got a “free” bike. But this review passes the Alex Test. I would not recommend a product or service that I didn’t believe in.

Why You Should Always Carry Your Own Bike Repair Kit