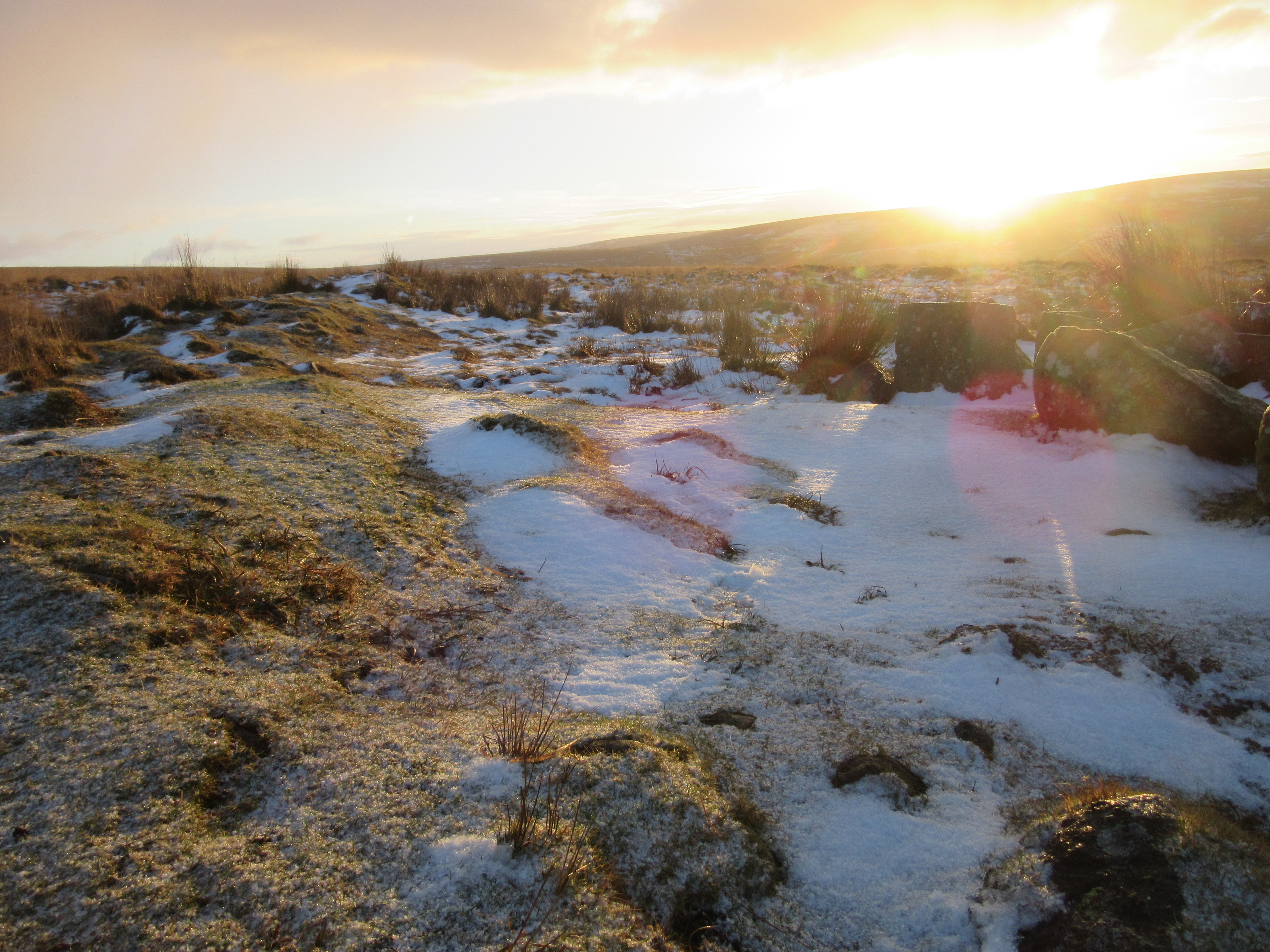 These past few weeks have been busy. Start as you intent to go on, they say, and if 2017 is set to continue like it has started, then I’ll be exhausted by March. I have two very big pieces of news for you. But I can’t tell you about them yet, I’m afraid. So you’ll just have to keep coming back, until I’m allowed…

Last weekend it snowed on Dartmoor (hooray!). We haven’t had a good bit of snow in ages. Okay, well since about this time last year. I should know, I was camping in it.

Anyway, I was going to cycle to Totnes to see a friend who’s just moved in. But I am seriously not a fan of cycling on roads with the possibility of ice. Walking, on the other hand? I love a bit of snow and ice. (Particularly frozen bog, if you want a happy Emily, give her some bog to crunch through.) So, I decided to walk the Abbots’ Way across the moor and then on to Totnes from there. Yes, I could have taken the bus, but buses are slow and boring…

The Abbots’ Way is the route across the moors taken by monks (and abbots, presumably) to get between the abbeys of Buckfast and Tavistock. Tavistock Abbey is now a pile of ruins, halfway under the ground, but Buckfast Abbey is alive and well.

Every year, there is a walking event that allows you to plod from Buckfastleigh to Tavistock and get a cloth badge and a pasty for your efforts. It’s all about the pasty. I’ve done the walk three or four times now, plus possibly once when I was little. So I figured I could probably manage it on my own.

The route is pretty straight forward. You travel from Tavistock, out onto the golf course, up to Pew Tor, Merrivale, Princetown and from there it is marked in great big dotted lines on the OS map.

I started early. I was already passing through Tavistock at 6 am. This is the earliest I’ve got up in ages and you could tell (I had to leave the house twice because I left my breakfast bagel on the banister rail…). The morning was clear, dark and definitely icy. I may have slipped on the pavement, but no one was looking.

In fact there was no one else there. Tavistock was silent and almost completely empty as I passed through, up the hill and onto the golf course.

The moon was so bright that I could clearly see my bagel munching shadow on the frozen grass.

I took a photo, but apparently the moon was not bright enough for the camera, even though my shadow was well defined for my eyes…

Only the ponies and I knew how beautiful a morning it was.

Don’t ask me how people manage to play golf up there, when the course is full of horses and sheep…

The official route of the Abbots’ Way event takes you North of Pew Tor and forces you to walk on the Merrivale road. It’s not a very busy road, but there isn’t a pavement and people do have a tendency to floor it… Particularly when the road’s empty.

So, instead of chancing becoming road kill, I thought I’d go through the quiet village of Sampford Spiney and up onto the dismantled railway line by Ingra Tor.

By this time, the light was coming up. But not enough for me to mistake another walker’s legs for a dog. They’re walking towards me on the other side of the road without a light and all I can see is this dark moving object near to the ground (their trousers).

I slow down a bit and drift closer to get a look. Basically, just stare. Got a huge shock when the rest of the body appeared and said good morning!

After crossing the road by Leeden Tor (which is, by the way, shut for leat-digging enterprises) I headed down towards Black Tor and the Devonport Leat. Apparently no one had told the two speeding teenagers that the road ahead was shut and I’m still wondering if that beeping was for me or someone else. Needless to say, I’m not the kind of girl who gets beeped by cars on a regular basis…

And then there was SNOW! So much snow!

Okay, so basically not much snow by anyone’s standards, but it was white and crunchy. It counts.

Even better, as I walked beside the leat, making breath clouds in the frozen morning air, I got to make the first steps on it. It was me and the snow and the sheep and no one else. Empty.

Soon the sunrise broke over the top of the hills. You’ve heard of a golden sunrise cliche, but my goodness it was golden. The first beams of light made the winter moorland grass go ochre, and everything else – my face included…

I don’t have words for how beautiful it was.

Eylesbarrow and Towards Here Be Monsters

After an inelegant traverse of the old tin workings and a couple of failed attempts at snow angels, I got to the top of Eylesbarrow. Suddenly I had the whole moor around me and not a living soul in my view.

Seriously. There was absolutely no one for miles around.

Okay, so it was still fairly early in the morning, but I thought there might have at least been someone else on a snowy Saturday morning. Their loss.

I crossed at Plym Ford, pleased with the iciness of the path and headed out towards the most remote part of the moors I know. Helpfully, the Abbots’ Way is marked very clearly on the OS map for this section. Unhelpfully, the path on the ground is actually a good 50m too far up the hill compared to the map. It just isn’t where it’s supposed to be.

I thought about whether there was some way to alert OS to come and take their aerial pictures today, because there was no doubt about where the path was. The tussock grass on either side was nicely frosted over and the path looked like an obvious motorway: the brown, boggy line through the middle.

Through Erme Pits and really into the depths of the moor, I was being chased by the weather. No joke, the weather can change very suddenly on Dartmoor. For example, here is a picture of the day in front of me…

… and here is the weather 180 degrees around, directly behind me.

No filters, no photoshop (why would I bother?), there was a completely different day going on behind me to in front. And I would much rather have the one in front thanks.

Over the Top towards Clapper Bridge

By this point I was pretty happy. There are two things that make this girl happiest on the moors. Number one is frozen bog. I absolutely love the crunch and the slight sink as you break through the hard crust into the moss.

The less common love of mine is peat on snow, or snow on peat. Pure white snow beside pitch black earth. Gorgeous.

On the way down to clapper bridge, the snow made the hut circle eyes even more visible than usual. I thought I’d share them with you: can you see them?

And here’s me, once again exhibiting my inability to take photographs of myself.

It was a lovely view, honest. My arms just don’t bend in those directions.

By this point it was on the way towards lunch time. But I don’t stop for lunch (peanut butter sandwiches on the go for me) and I kind of had it in my head that I wanted to be in Buckfastleigh before lunch.

Going towards Venford Dam (the one with whales in), I met four people also out for a walk.

I tried not to be too surprised.

What was surprising was how much clothing they were wearing! There I am racing along in a base layer (it had been spitting in the above photo, hence waterproof) and everyone else is wrapped up in duvet jackets. Hats, gloves, many coats. Odd.

Even more odd for me, because I’m used to feeling over dressed. The awkward one at the beach in Cyprus who’s actually wearing a t-shirt not a bikini? Yep. I’m not sure I’ll ever want to wear a bikini.

Anyway, back to snow and walkers, I was pacing it past the midday dog walkers and into civilisation. When I reached the moor gate, I had it in my head that I was almost finished.

There is a ridiculously long walk out along the road towards Buckfastleigh. The usual route would go towards the Abbey, but I was heading towards Totnes.

Let’s say that by the time I reached Totnes at 3 o’clock in the afternoon, I was ready to sit down.

There is a special sort of ache reserved for feet that have been hitting the tarmac for the last two hours. Never mind the fact that my boots should have been sent to the kit cupboard in the sky over a year ago… More on my boot finding escapade with Salomon another time…

After a picturesque, if a bit too long, walk down Old Totnes Road and a small incident trying to find the centre of town, I made it. Many thanks to the nice lady who showed me to the right bridge. I think I may have incited some competitive fast walking spirit in an already pretty fast walker.

Sooo… would I do it again? Yes, but not for a while. Particularly the bit from Buckfastleigh to Totnes. Just a bit long really.

Which way should you do the Abbots’ Way? Buckfast to Tavistock. Definitely.

The walk over the golf course and into Tavistock does seem long at the end of the day, but at least it is varied. Walking 3km on a boring hedged road at the end of your day is soul destroying.Save

Walking the John Muir Trail in 2023