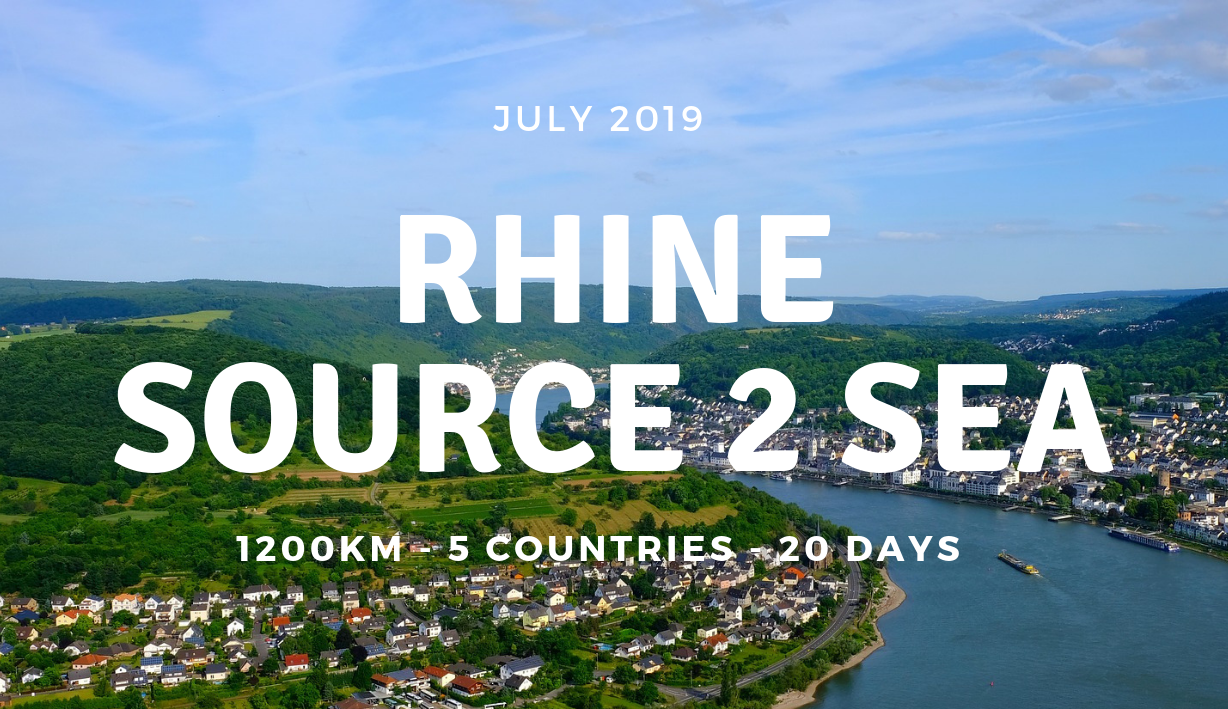 You’ve been waiting very patiently for me to announce my big 2019 adventure. Well, here it is. This summer I will be back on a bicycle in Europe (a la 2016 and actually 2011 and 2013 before any of you ever knew me)! My friend Alex and I will be cycling the length of the Rhine, from source to sea. That’s the headline details, but first you should know the story.

An Adventure was Born

After I finished All the Tors, I was bombarded with people asking me what I was going to do next. Friends, family… no colleagues, actually… but people who recognised me off local TV and at talks, festivals… It got so much that I felt like I needed to write this post to vocalise it all. Because the honest answer was: I don’t know.

The world is wide and time is short, as they say. There are so many interesting adventures vying for our attention. But none of them grabbed me by the shoulders and shook me shouting, “Emily! You have to come and do this now!” I was paralysed by choice – and also the competing priorities of “real life”. What did I want to spend my time on most? What was most important right now?

Anyway, I managed to get to 17th January without having a clue about what I was going to do in 2019. Then Alex came round.

Interjection: Who is Alex?

Alex has been my friend for almost 15 years. She went to school with me and lives nearby – or she would if she didn’t keep running away to other countries! One day my Mum came home and said, “I have met someone you’re going to get on with.” The rest, as they say, is history…

So, Alex came round to my house one evening. We were going to go for a walk but it was already dark and we’d both been working that day. So instead, we sat in the living room and talked. Somehow the conversation came onto future adventures. That’s when Alex said, “I’ve always wanted to cycle the Rhine.”

I paused and said, “How about doing it this year?”

Within two days we’d gone from no adventure plan to a pretty good idea of what we’d spend our summer doing. Brilliant! Sometimes it just takes another person to take you seriously to make a trip happen.

Rhine Source to Sea: The Plan

As it stands, we will be heading out to Switzerland on 25th July to get to the source of the Rhine. We’ve both got to get our bicycles out there, time off work etc. But in principal that’s what’s going to happen. We’ll be following Euro Velo 15 through Switzerland, Germany, France, Lichtenstein and Holland. I should say that I’m incredibly excited about Lichtenstein because it is currently top of my “coolest little country in the world” list.

I do have some history with the Rhine. On the tandem trip of 2016 we managed all of 1 day along the Rhine through Germany. The path was made of gravel and that can be pretty tiresome on a tandem. We abandoned it and used the road signs instead. I was pretty disappointed because, back when I was a teenager we’d bumped into another cycle-touring family who’d expounded about how great the Rhine was. It didn’t make sense. Turns out the French side has a much better surface, so that’s what we’ll be doing this time!

It should take us somewhere between 16-20 days to cycle from source to sea. We’ll be camping along the way (in campsites) and carrying all our gear (of course).

How do I feel about it?

Excited, I think. We have 3 months to go and everything seems to be in hand. Some of the things that need attending to are:

Although Alex is an experienced traveller, this will be her first bike tour. That’s exciting in itself. We’ve never done a long trip away together so fingers crossed we’ll get along just fine. We’ve known each other for most of our lives but bike touring can bring out the most peculiar niggles…

There’s a little voice in my head telling me that this isn’t much of a challenge. I’m pretty certain we can both do it. But adventure doesn’t always have to be about taking on the seemingly impossible. I love those kind of adventures, but I also love the escapism of a bike tour. We’re exploring the world and, since that’s not something I do every day, I think I can call that an adventure.

After hauling my life around Dartmoor in an epic Emily vs the elements battle last year. I feel justified in doing something a bit more pleasant. Or at least, something that I hope will be a bit more pleasant… Plus so many of you ask about how to do a “first big adventure”. This is a perfect example.

Well lots of ways! For a start, keep your eyes on this blog for more planning updates and the preparation stage. I’m hoping to do update videos whist we’re on the trip. Maybe we’ll do mapping like All the Tors, maybe vids and snaps will be enough. We’ll see.

I’m very taken with the idea of how to bring people along on an adventure. Particularly after the support I felt on my solo adventure last year.

Either way, make sure you bookmark the Rhine Source 2 Sea Adventure page. I’ll link and announce everything on that.