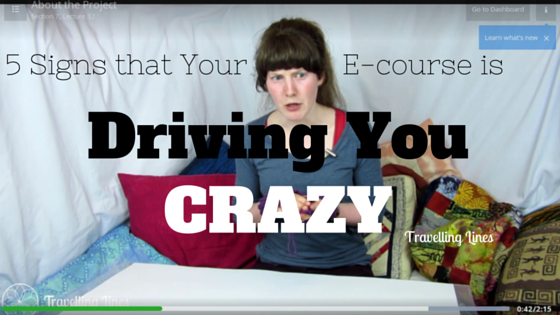 It’s 10 o’clock at night. My parents are watching a movie. I’m glued to my desk, forcing myself to record just one more audio track before I call enough. Just one more… I started work at 7:30 am.

This knitting course (specifically “Learn to Knit It: Complete 7 Simple Projects” for those of you who haven’t met) is taking over my life. Well, my free time at least.

It would probably be unacceptable to edit videos under my desk at work, even if I am part time. The desks aren’t big enough to fit my PC under anyway.

In fact, it’s not even my PC I’m using and that’s half the problem.

I’ve set myself the desperate task of finishing the lot (THE LOT) before its rightful owner returns to claim it. Probably for a mildly excessive amount of gaming. Because, you know, what else would you need a 64 bit wonder machine and a good graphics card for?

Guess that’s why I don’t have one.

My 32 bit, basically un-transportable laptop and I have never needed anything more in our relationship.

At the time of writing, I’m 53 lectures down, out of 78, and I can feel myself starting to go around the bend. Here’s how I can tell:

One of the most time consuming parts of the whole e-course process is the audio. It was a saga in itself, because I started with a bad microphone.

In hindsight, it was never going to work. I was borrowing a headset, recording just my hands, but at some point I had to get in front of that camera and teach.

Nope, they had to go.

Easy, get a new microphone.

But when I finally got a new one, it was so good that it picked up the echo in the room I was in… Okay, I’ll get a new room.

So I shifted everything to another room and it worked. Yes.

But even now it’s echo free and clear, there’s always going to be a bit of noise. Whether it’s my plait has decided to get caught on the lapel, I’ve accidentally kicked the table or I’m getting over-excited with the toy stuffing.

Actually, the biggest killer is the smallest.

So I’ll be talking away and there’ll be a distractingly loud CLICK. Or maybe a SSHWISH as one needle slides over the other.

Yes, I now know the two noises in every stitch.

One more thing to think about as I knit.

Although I still listen through every audio track and weedle out as much of the distractions as I can, there are some I really don’t need to any more.

I’ve got to the stage where I can guess it.

Don’t know about you, but I find that slightly worrying.

2. You are almost drawn to tears when the camera  auto-unfocuses mid conversation.

But there is nothing I can do about it at the moment, because my nice camera doesn’t film. So here I am trying to wring a decent course out of a compact camera bought for snaps on mountains.

What a coincidence that it films in 1080p HD! Why would you give such a feature to such an insignificant little camera?

Probably the most use this feature gets on the hill is when I accidentally press the big red button half way up a snow-filled gully and record a few seconds of my feet.

But the problem is that when I need it to stay still for a bit, it won’t play the game.

I’ve strapped it down to a tripod, not even zoomed in and am hardly moving about in front of it.

Either intentionally or not, suddenly it’ll go cross eyed with boredom. Or decide to focus on the background instead.

We’ve all done it at school, but I thought technology was less prone to those problems.

Half a second and it’s remembered I’m talking and focuses back in.

Too late camera. Too late.

If I can’t swap angle, then we’re going to have to do the whole lot again.

3. The little green labels give you unspeakable joy.

Never mind Facebook. You could spend hours scrolling up and down in disbelief at how much green there is.

Every green label represents between 5-20 minutes of lesson and HOURS upon hours of work.

I’ve poured out sooo much of my life into this course.

From start until now, it’s been 8 months.

Who knows how long it will take my future students to actually do the course themselves. Hopefully less than 8 months, but then I don’t know. It’ll be interesting to see how long most people take.

In fact, the only thing I can think of that would be more exciting than seeing an entire page of green labels, is actual students’ actual projects. Projects knitted from my course, people whom I’ve taught to knit from afar.

I cannot wait for that.

4. You sigh every time you don’t mean what you say on camera (or even say what you mean).

It’s mostly the numbers for me.

“Now the pattern says we should have 16 stitches…”

The pattern is in front of your face. You are reading it right now, as you speak.

The camera has recorded evidence of you looking at it. I can see you looking down, reading it.

I have it in front of me now too and it very clearly does not say 16.

You’ve already got well over 30 stitches on your needles. What on earth are you thinking? Has your brain gone off for a daydream with the camera?

The more times you do this, the more times I have to make notes on the screen, apologising for my reading incompetence.

So here comes another slice and composite shot.

5. You are putting off exercise.

I’m going on a crazy month-and-a-bit cycle tour of Europe. On a tandem.

Have I booked anything? Of course not.

But I’ll get really fit then, won’t I? So it’s absolutely fine to put off exercise until then.

That way I can get this done in time.

Because that’s how fitness works.

Extreme Adventure… Knitting? Knitters Like You’ve Never Seen Them Before