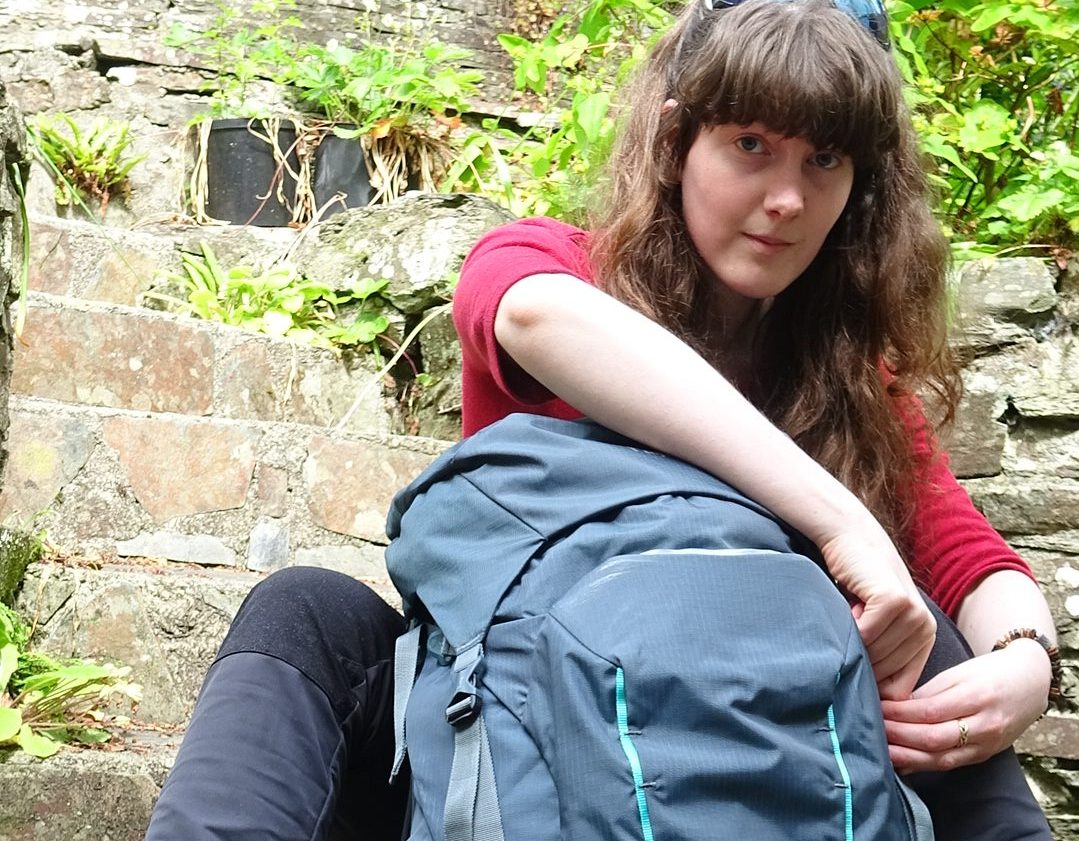 If you follow my IGTV, you’ll know that Lowe Alpine kindly sent me an Altus ND50:55 rucksack to try out as part of their #MOVEYOURWORLD campaign. It arrived at the start of May in an excitingly big cardboard box. You might also remember that I’d been hoping to walk across Assynt this May. Unfortunately that fell through for this year but – as this is my life – it quickly filled up with other things!

When I first started walking, I didn’t really understand the need for loads of sizes of rucksack. In my mind there were two sizes:

Simple. But over the years I’ve come to realise that finding the perfect rucksack is like finding the perfect layering system. It changes based on the trip, the weather, the location… Okay so maybe I’m just making excuses for the number of rucksacks I have now.

From this incredibly scientific graph, you can see what I’m missing:

This also tells you a lot about me. I prefer bags that you can top up above their recommended litre-age, aka I often over-pack. There aren’t many people who can get a 38 litre rucksack through hand luggage and then proceed to use it for a week’s alpine tour. (Although it’s really easy guys!) Or take a 60 litre bag without a floating lid on a 10 day expedition… Never mind that trip to the Lakes in January when I filled my poor expedition bag to almost exploding.

If I had been going to Assynt, then a 70L+ bag would have been appropriate (and probably dangerous for my packing). But since my May and June have been filled with other smaller things, it seemed appropriate to fill the big gap in the middle of my graph – around the 50L mark. Hence the Altus 50:55L.

Okay first up let me introduce you to what this is about a little. Lowe Alpine have just launched/relaunched some of their rucksacks, including the Altus. They come in all sorts of different sizes, but I went for the 50+5L. The Altus seemed like a good all-round sort of bag, which is good because I had a whole range of activities it needed to perform on.

Not too much to ask hey?

If you didn’t know already, Lowe Alpine make rucksacks – and just rucksacks (well, they call them “world class carry systems”). They’ve been doing it since 1967 so if anyone knows how to make a good mountain bag, it should be them! Plus in case you’re wondering, I’ve had Lowe Alpine stickers on my laptop for the past 3 years…

For those of you who don’t know, Ten Tors is a huge event on Dartmoor that happens every year. Basically, some 2400 teenagers descend onto the moors, walking either 35, 45 or 55 miles over the weekend. They have to be self-sufficient in teams of 6 and camp out overnight. I did the challenge as a teenager (4 times…) and now help out leading for that walking group I did it with. Alongside that I’m also in Dartmoor Rescue, so I’m on call or patrol for the whole weekend.

It’s 11pm on the Friday before Ten Tors. I’m inside our main marquee, putting up a 1 man tent by the light of a head torch. The tent only just fits between the sofa and the table. Outside the marquee, the rest of Okehampton Army Camp is settling down to a mostly nervous night’s sleep. The traditional conga line of teenagers had done the rounds and most of the nervous-excitement has now been dissipated – ready for the 5am start tomorrow.

Needless to say, as I crawl into my tent-in-a-tent, I’m feeling like a bit of a nomad. I brought all my belongings up on Thursday evening after work, all packed up into the bag. Well, almost. I had to strap my helmet on the outside because it wouldn’t quite fit. Balancing being able to stay warm for two days of freezing, windy Okehampton Camp and enough room for Mountain Rescue kit is always a challenge. This is my third year of doing it and I still haven’t got it right. Clearly not, after a freezing Thursday night in someone else’s empty tent.

Saturday morning at 7:01am is still a very strange time for me. Standing on top of the hill by Antony Stile, I watch the sea of teenagers lurch forward as the gun goes off. They swarm down the hill and off towards a huge walk, some pain and a finish line. I still feel like I should be in that swarm. But I’m not and I’m sure I’ll get used to it one day. Instead I find a friend, hop in a helicopter and arrive at Wilsworthy with style. Although it’s probably irrelevant to most people, having all your kit in one bag that fits between your knees is great for helicopter travel.

Then there’s a quick turn around. I have to dump my overnight kit in the barracks, repack my bag for being operational and head back out onto the hill for deployment. No problem. Before I know it, I’m out on patrol up to Chat Tor. A team of luminous green t-shirts storms by – there’s only one team that could be. I shout and wave and that’s the last I see of them for the rest of the weekend.

This was the first time I used the Altus and, honestly, I was impressed with how much stuff I could cram into it. Even better when I worked out the separator of the bottom compartment can be unzipped. The lid doesn’t float, so there’s a limit on how ridiculously high I can pack it, but the straps all slack off a long way. It can get far wider and deeper than it looks. The pouch on the back also makes a useful space for things that just won’t fit anywhere else.

At the end of May, I went to Ireland to be one of the first people to do the Reeks District’s new Big 5 Challenge (post coming soon!). This would involve walking, surfing, kayaking, cycling and a night SUP, all over 4 days. It was a press trip, so that means you’re very well looked after and everything is pre-arranged for you. All you have to do is arrive well equipped and armed with enthusiasm. Game on.

It’s a good job that I didn’t get a single view in Ireland’s mountains last September. I would have accidentally forgotten about the bike, run for the hills and missed the ferry. Instead they mountains around Carrauntohill were shrouded with damp, grey mystery.

This time, there was a view. We climbed the highest peak in Ireland via the Devil’s Staircase. It was a flat walk in along the valley, then a steep scrambly section (the ladder). Finally, we headed up the scree slope past a huge school group to the cross at the top. Friends, there were views. I could see the scramble ridge I’d done in September. I could see the other 2 peaks. But worse, I could see loads of other beautiful jagged ridges shouting, “Hey! Over here!”

I will have to go back.

You might say that this was the Goldilocks test. The bag had already proved it could be overpacked. Could it be underpacked in a useful way (aka fit in hand luggage)? Was it too big to take on a day walk without feeling over-dressed?

The Altus did well in both these situations. I got it through hand luggage (yippee!). The frame was the exact height of the Flybe allowance. The stiff waistband almost gave me a problem, but careful rearrangement of stuff solved the problem.

I’d say that it’s about the maximum size I’d consider taking for a day walk. Perfect for if you’re leading, because you want a bit of extra space. As a client, I just tightened up all the straps to make the bag tall and narrow. It worked a treat. The waist band was comfortable and the side pockets a good size for water bottles or food. They are definitely smaller than they look though. Plus beware the tiny hole at the bottom!

My tent is too big. I know my tent is too big. But my wonderful little 3 man tent is my home from home. As a snail will lug around his oversized shell, so Emily will lug her oversized tent. It would feel wrong without it. This makes the challenge all the more interesting for lightweight camping. There’s only so much I can strip out.

I am running late. Well, not physically running yet, but stomping fast across the moors. The morning was sunny and so I decided to walk to the start point of the Intrepid Magazine Camping Trip. That means I’ve got about 2.5 hours to walk to Princetown. No problem, I tell myself. But for some reason I don’t trust myself. I feel like I’m running late… and what could be more embarrassing than arriving late to a party you organised?

It is hot. Ridiculously hot. I’m (pleasantly) surprised that all my camping equipment fitted happily into the bag. Sure, I had to change some well-established habits of where I put my gear. But everything works and I could get used to it. For some reason it was still a bit of a shock at how heavy such a small bag was. I mean duh Emily, you’re carrying all the same kit just in a smaller packaged. What were you expecting?

It’s always a bit odd meeting people for the first time. I find it particularly odd when you’ve sort of met them from the internet. You come with some ideas of what they might be like and are proved (in my case) completely wrong. This is the second time I’ve taken strangers camping and they were, once again, all lovely.

We met up at Princetown – I was early in the end – and walked for the afternoon. At an appropriate time and place, we set up camp. One night on a bog later and quite a lot of rain, we got up early and walked back to Princetown. A lovely weekend all round.

The bag did very well. As I’ve already said, I managed to get my kit in without too much of a struggle. In fact, without any struggle. I think in future I’ll use the outside pockets and pouches just for food. Everything else fitted nicely inside – even my enormous tent! It even all fitted back into the same place on day 2 without any effort.

The bag was comfortable with the extra weight. I’m used to having the main weight a lot higher (bigger bag) but I wasn’t really aware of the bag. Once I’d put it on my back, I could forget about it. No one likes an attention seeking rucksack.